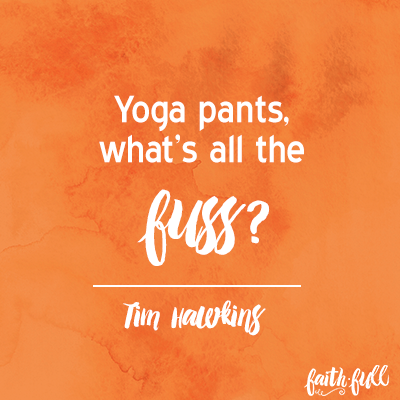 Editor’s Note: Enjoy this personal message from Tim Hawkins straight to us!

This may be the most amazing song I have ever written, or it may not be. Let the vagueness intrigue you. Don’t doubt me, though. These stanzas are about real life. As real as it gets. No music required — the lyrics will suffice to express the deepest part of my soul.

My wife was out for three days to visit her mom

I was supposed to cook and clean while she was gone

Somehow she never buckles under all the demands

I had to know her secret, I had to understand

I realized it’s got to be something that she wears

Yoga pants, she wears them all day

Yoga pants, at work and at play

Yoga pants, what’s all the fuss?

What makes them so special that they keep them from us?

Well any normal person would leave it alone

But I’m not a normal person and nobody was home

My wife was out of town and the kids were outside

I went into the bedroom and decided I would try… her

Yoga pants, so stretchy and thin

I’ve never done yoga, but these make me want to try

Yoga pants, so soft and so sleek

Tweet Thought @timhawkinscomic “I enjoy your husband’s hot pants.” — A lady trying to tell my wife that she likes my “Yoga Pants” song.

Tweet Thought @timhawkinscomic Thanks, North Face, for cutting-edge technology that keeps people warm from their cars to the front door of Starbucks.

Excerpted with permission from Diary of a Jackwagon by Tim Hawkins, copyright Thomas Nelson.

I’ve lost track of how many times I’ve taken my kids and friends to see Tim Hawkins in concert. He’s just a complete riot! But, Yoga Pants holds a special place in my heart especially because they’re a part of my daily uniform. What is your favorite Tim Hawkins sketch? Come share with us on our blog! We want to hear your favorite! ~ Laurie McClure, Faith.Full