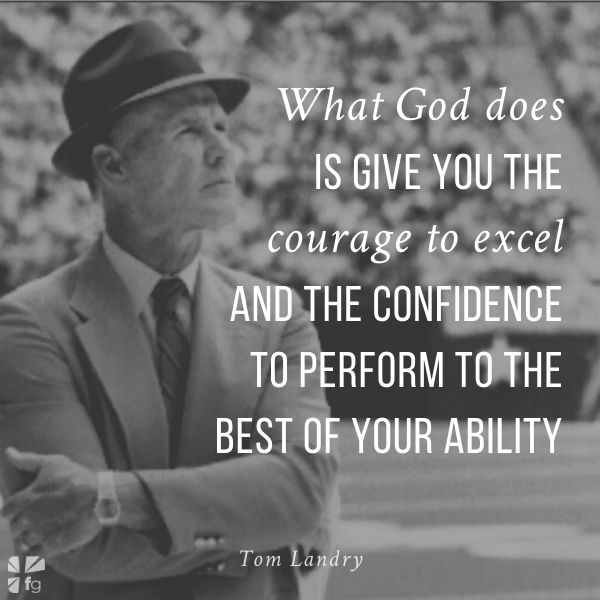 Tom Landry was one of the greatest Christian gentlemen I ever knew.
— Dr. Billy Graham

Editor’s Note: Tom Landry was the first head coach of the Dallas Cowboys in the NFL, a position he held for 29 seasons. He lead the Cowboys to 20 consecutive winning seasons and 2 Super Bowl victories. Despite his success, though, living out his faith well was far more important to Landry than any of these achievements, as author Bob St. John writes in his book Landry: The Legend and The Legacy. Enjoy this excerpt as we approach Super Bowl Sunday!

When the 1958 football season ended and Tom Landry returned to Dallas, a friend, Frank Phillips, invited him to join a group of men who would often meet at the Melrose Hotel for a breakfast during which they’d discuss the Scriptures. Landry was somewhat skeptical, but when he agreed to attend the meeting that morning, it would be the beginning of the biggest change ever to take place in his life.

“I had been in and about the church all my life,” Landry recalled. “But, really, it was only half-heartedly. I considered myself a churchgoer and a pretty good guy. Certainly, I thought of myself as a Christian but found out I really wasn’t. I was just a church-goer, which is a lot different. If you just go to church, it’s like going to the Lions Club or something like that. Oh, man, there’s no comparison.

“Anyway, I wasn’t sure Bible discussion was for me, since my scientific approach made it difficult to accept certain parts of the Scripture.”

Nevertheless, he arrived at 7:30 A.M. and found four tables of eight to ten men each. After breakfast, men at each table chose a moderator to begin discussion of the Bible. Landry’s analytical mind was properly challenged, and so he kept going back each week to the informal sessions in which the men searched for answers in the Bible. He listened and began to question things about his life, and then he asked himself a most critical question: “Is not life more important than football?”

His football accomplishments were stacked high… He had been blessed with a fine, beautiful wife and three children. So what was wrong? Why was there emptiness, dissatisfaction? What was lacking? He wasn’t sure but was more than willing to search for the unknown factor that would complete the equation to happiness, to fulfillment. To do so, he was compelled to turn his thoughts in a more serious manner toward Christ. He had read about Him throughout his life, but who was this man, really? Did he actually accept Him? If he did, then he must accept what He said. If he accepted what He said, then the way he had been living his life was not right.

“At that point I nearly stopped going to those Bible sessions,” Landry admitted. “For my whole life had been carefully structured throughout the year, and I was almost convinced that my future lay in being a coach. That was no time to become confused about my goals in life.”

Yet the challenge was there, and he continued to attend the Bible study breakfasts regularly until he was convinced that Jesus Christ was the missing link in his life. “I find it difficult to pick out any one specific turning point for me,” said Landry. “I can’t pinpoint it by a time or place. There was no emotional experience. As with the Galilean we talked about during one of those Bible sessions, I found myself attracted to Christ.”

Landry remembered that his earliest urge to accept Christ was drawn from two Bible passages, both from the Gospel of Matthew.

Therefore whosoever heareth these sayings of Mine, and doeth them, I will liken him unto a wise man, which built his house upon a rock. And the rain descended, and the floods came, and the winds blew, and beat upon that house; and it fell not; for it was founded upon a rock. — Matthew 7:24-25

He read the passages over and over and began to wonder if, indeed, his house was founded on rock. Certainly, he and Alicia and the children went to church, but what did it really mean to them? What kind of foundation was he building for his family? What kind of real foundation?

“For a self-centered person, those can be disconcerting questions,” said Landry. “For the first time, I began to feel a quickening desire to get to know this man, Jesus Christ. At the next meeting I asked, ‘How can we be sure Jesus is who He says He is?’ Nobody there could answer the question in a way that satisfied me.”

So Landry spent a great deal of time analyzing what he had been thinking about and researching the man, Jesus Christ. Football had taught him to measure things in terms of results. Players are trained to accomplish certain objectives, such as a kicking specialist putting three points on the scoreboard when the ball is in his range and a passer throwing the ball so a receiver can catch it a high percentage of the time. Landry began thinking about Jesus in terms of what He did and the results of His life. In doing this, he discovered Christ’s compelling impact on the lives of countless millions of people down through the years.

“At some period during the spring of 1959, all my so-called intellectual questions no longer seemed important, and I had a joyous feeling inside,” said Landry. “Internally, the decision had been made. Now, while the process had been slow and gradual, once made, the decision has been the most important one of my life. It was a commitment of my life to Jesus Christ and a willingness to do what He wanted me to do as best I could by seeking His will through prayer and reading His Word.”

Landry never did try to push his faith onto his players, but he always told them exactly how he felt. “I didn’t want them to feel pressured or obligated to be a part of it,” he explained. “I didn’t want to come across as a pious-type person. We always had players who were strong Christians. A lot of people thought we had only a Christianlike atmosphere on our team. That wasn’t correct. The atmosphere we tried to create was one in which we hoped to develop good character, although we knew not everybody was a Christian.

“I always hoped the influence was such that whether we were out in public or on the field, we conducted ourselves in such a way to show Christian traits. If we had a player who had no values at all, then I wouldn’t tolerate this. When a guy has good character he’s at least pointed in the right direction.”

Landry would, on occasion, directly share his faith with his players and at times reassure them with words from the Scriptures when they were going through difficult times. “God does not give us fear, but power and love and self-control,” he told them. “The thing that eats you up is fear and anxiety. Once you commit your life to Christ, it’s in God’s hands. He has a direction He wants to take you which isn’t based on winning or losing. The more you dwell on your own power, the more anxious you become.”

Randy White said he always enjoyed when Landry would give the players a small bit of Scripture or share his feelings with them. And Charlie Waters recalled, “Nobody resented it when he told us something from the Bible or about his faith. He never tried to force it on us. I always appreciated hearing what had guided a man as wise as he was.”

“He shows you by example what a Christian life is all about,” said Danny Reeves. “That’s more impressive than any words can be.”

Under Landry, the Cowboys had a team prayer session before each game and an early-morning nondenominational service before road games. Attendance was optional. Players were encouraged to attend a service of their own faith, but of course, that was also optional.

Once I told Landry about an argument I’d had with a well-known college coach who asked God to give his team the strength to win. I had voiced the opinion that God did not care who won a football game. Landry commented, “God doesn’t interfere in games. We have great Christian friends all around the league. What God does is give you the courage to excel and the confidence to perform to the best of your ability. So many players don’t do that; they don’t use the talent they have.”

Landry didn’t believe a person must be a Christian to become a great athlete, although he did feel it helps. “I put some emphasis on a religious commitment in relation to everything,” he said. “I feel a man who is not committed to Christ is handicapped in almost anything he does. A person who is committed to Christ has more freedom and is, therefore, able to develop himself to the fullest. He doesn’t need to have the fears and the anxieties that can hold him back. I always found our Christian players seemed to get more out of their jobs. I believe they enjoyed them more and reached higher levels than they would have had they not been committed.

“I’m not saying that you will become a great athlete by receiving Christ, but I do believe that if you have the natural ability, your commitment to Him will enable you to achieve a greater degree of excellence. The most unfortunate thing in my life was that I did not discover Christ until I was coaching. I didn’t have the pleasure and enjoyment of knowing Him while I was a player. If you have a positive attitude, good things will happen. Why has positive thinking become a multimillion-dollar industry? They’re just teaching what God gives us in the Bible.”

Excerpted with permission from Landry: The Legend and The Legacy by Bob St. John, copyright Bob St. John.

What arena are you called to?  In what area of your life do you need His courage to perform at your best? Oh… and which team are you rooting for this Sunday?! We’d love to hear your thoughts in the comments!