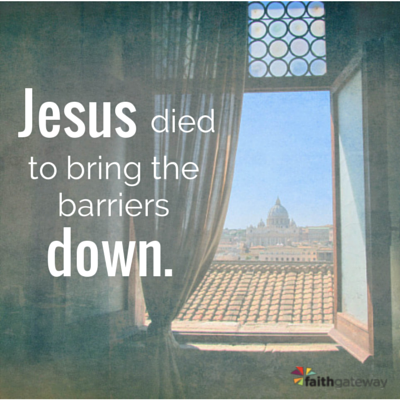 Editors Note: This is an excerpt from Being Still with God Every Day. In this 366-day devotional, each day features a scripture and a short, meaningful devotion to set minds and hearts on practical, godly living every day of the year.

Jesus cried out with a loud voice, and breathed His last. Then the veil of the temple was torn in two from top to bottom. – Mark 15:37–38

The veil separated the people from the temple’s Most Holy Place, and it had done so for centuries. According to tradition, the veil—a handbreadth in thickness—was woven of seventy-two twisted plaits, each plait consisting of twenty-four threads. The veil was apparently sixty feet long and thirty feet wide.

The fact that it was torn apart from the top down indicated that the tearing was an irrevocable act of God in Heaven that gave people access to Him. This tearing reflected the rending of Christ’s body on the cross. He had just breathed His last. Death by suffocation, death on the cross — it was finished. Yet it was also the beginning — the commencement of a new kind of intimate relationship between God and His people. Christ’s death on the cross removed every obstacle that has separated — and could ever separate — people from God. Our Most Holy God is now accessible to everyone through Jesus Christ. It is we ourselves who erect any barriers that exist between God and us.

What barriers are you choosing to let stand? Jesus died to bring them down.

Excerpted with permission from Being Still with God Every Day by Henry Blackaby and Richard Blackaby, copyright Thomas Nelson 2014.

Because of what Christ did on the cross, we are no longer separated from the presence of God. Sometimes we can’t feel or sense His presence, but He is always there — constant in His love and character. He never changes! Have you created your own barriers that have made you feel distant from God? Join the conversation on the blog. We would love to hear from you! ~ Devotionals Daily