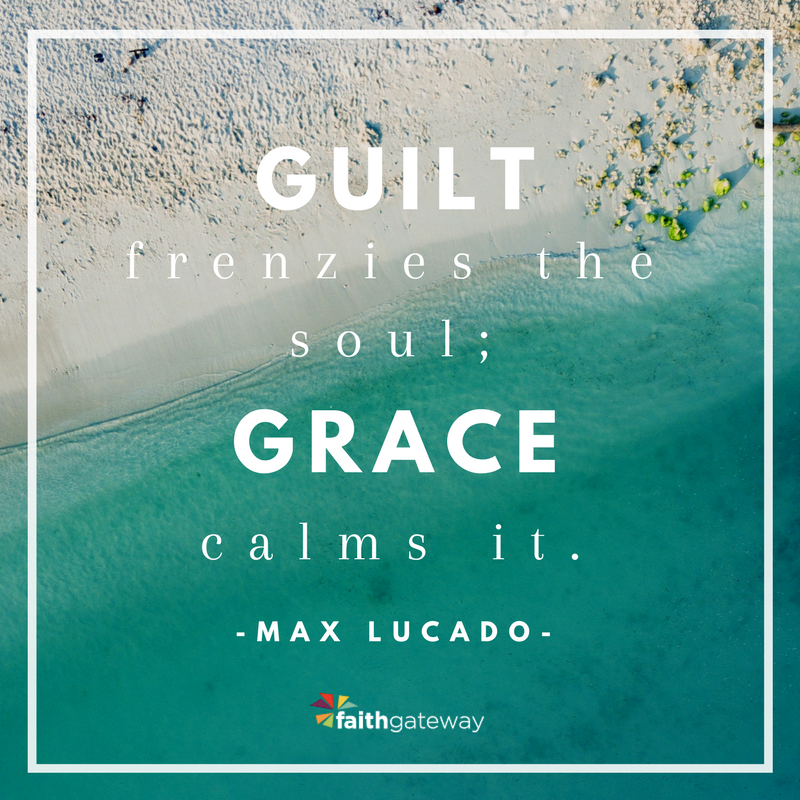 Our guilt may be the result of a moment or a season in life. You failed as a parent. You blew it in your career. You squandered your youth or your money.

The result? Guilt. A harsh consequence of the guilt? Anxiety. Surprised?

Lists of anxiety-triggers typically include busy schedules, unrealistic demands, or heavy traffic. But we must go deeper. Behind the frantic expressions on the faces of humanity is unresolved regret.

Indeed, humanity’s first occasion of anxiety can be attributed to guilt.

That evening [Adam and Eve] heard the sound of the Lord God walking in the garden; and they hid themselves among the trees. — Genesis 3:8 TLB

What had happened to the first family? Until this point there was no indication they felt any fear or trepidation. They had never hidden from God. Indeed, they had nothing to hide.

The man and his wife were both naked, but they felt no shame. — Genesis 2:25 NLT

But then came the serpent and the forbidden fruit. The first couple said yes to the serpent’s temptation and no to God. And when they did, their world collapsed like an accordion. They scurried into the bushes and went into hiding, feeling a mélange of shame and dread. They did what anxious people do; they engaged in a flurry of cover-ups.

Can you relate? The only antidote to guilt is the power of God’s grace. I could take you to the city, to the church within the city, to the section of seats within the church auditorium. I might be able to find the very seat in which I was sitting when this grace found me. I was a twenty-year-old college sophomore. For four years I had lived with the concrete block of guilt, not just from the first night of drunkenness but also a hundred more like it. The guilt had made a mess of my life, and I was headed toward a lifetime of misery. But then I heard a preacher do for me what I’m attempting to do for you: describe the divine grace that is greater than sin. When at the end of the message he asked if anyone would like to come forward and receive this grace, iron chains could not have held me back. Truth be told, chains had held me back. But mercy snapped the chains of guilt and set me free. I know this truth firsthand:

You are a version of Joseph in your generation. You carry something of God within you, something noble and holy, something the world needs — wisdom, kindness, mercy, skill. That is what God is building in you. But remember, “It will take time.” Whether it’s highways or hearts, that’s just how these projects develop.

Here’s a Top-Ten List of how we try to deal with our guilt. See which sound a bit too familiar to you.

Confession is not complaining. If I merely recite my problems and tell you how tough my life is, I’m not confessing. Confession is not blaming. Pointing fingers at others without pointing any at myself may feel good for a while, but it does nothing to remove the conflict within me.

Confession is coming clean with God.

King David did. As if the affair with Bathsheba wasn’t enough. As if the murder of her husband wasn’t enough. Somehow David danced around the truth. He denied his wrong- doing for at least nine months until the child was born. It took a prophet to bring the truth to the surface, but when he did, David didn’t like what he saw (2 Samuel 11:1-12:13).

He waved the white flag. No more combat with God. No more arguing with Heaven. What was the result of such honesty?

I confessed all my sins to you and stopped trying to hide my guilt. I said to myself, “I will confess my rebellion to the Lord.” And you forgave me! All my guilt is gone. — Psalm 32:5 NLT

But all these things that I [Paul] once thought very worthwhile — now I’ve thrown them all away so that I can put my trust and hope in Christ alone. — Philippians 3:7 TLB

Now I am right with God, not because I followed the law, but because I believed in Christ. — Philippians 3:9 NCV

I am still not all I should be, but I am bringing all my energies to bear on this one thing: Forgetting the past and looking forward to what lies ahead, I strain to reach the end of the race and receive the prize for which God is calling us up to Heaven because of what Christ Jesus did for us. — Philippians 3:13-14 TLB

The man and his wife were both naked, but they felt no shame. — Genesis 2:25 NLT

Then I acknowledged my sin to You and did not cover up my iniquity. I said, “I will confess my transgressions to the Lord.” And you forgave the guilt of my sin. God’s readiness to give and forgive is now public. Salvation’s available for everyone! — Titus 2:11 MSG

Excerpted with permission from Trade Your Cares for Calm by Max Lucado, copyright Max Lucado.

Let’s come clean with God today. We don’t have to carry guilt around on our backs. We don’t have to live anxious, sleepless, and hiding from the pursuit of Jesus. We can walk right into His grace and be forgiven and relieved from the weight of sin. Let’s do it! Come share your thoughts with us on our blog. We want to hear from you! ~ Devotionals Daily