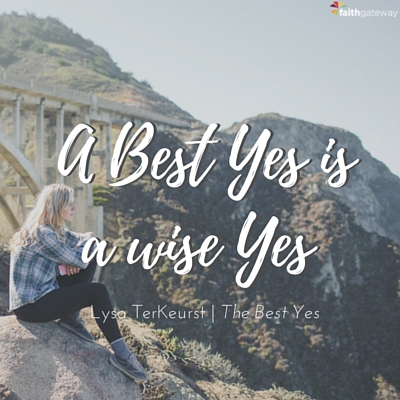 How do I discern a Best Yes?

Great question, but this question doesn’t have just one answer. It has layers of answers. The first layer we discussed was “consider the trade.” If I say yes to this, I will have to release that. Will that trade be worth it?

The next layer is “show up to practice.”

My daughter Ashley is a pole-vaulter, which means she has learned how to sprint down the track in spiked shoes, plant the very long pole she’s carrying into a small pit, bend the pole down enough to create a force to lift her body off the ground, twist so her head is down and her feet are now pointed toward the sky, arch over a bar at least eight feet off the mat, and throw the pole away from her at the last minute while she crashes down onto the mat, hopefully back-first and not face-first.

And did I mention she has to do all that without jostling or hitting the bar she’s careening over, lest the bar fall and her jump not count? It’s no joke.

The first time I watched her, I literally held my breath until my face turned bright red. And I might have slightly tee-teed in my pants. Three drops. But enough to realize this sport was going to take some getting used to.

Her first year of pole vaulting was hard. She held last place on the team the whole year. Though she tried and tried and tried, she could barely clear eight feet — a height the other girls were getting with ease. At one meet she literally landed on top of the crossbar, straddling it much to the simultaneous amazement and disbelief of the spectators. The crossbar usually falls if you so much as tap it. But somehow it stayed in place even after she lifted one leg over and fell to the mat below. The jump counted, but it was still too low of a height to move up in ranking.

Her second year was also hard. Again, she held last place on the team almost the entire year. Though she started clearing eight feet on some days, she still couldn’t clear the bar at higher levels on a consistent basis. As a result, her teammates all qualified to go to the year-end state meet. But she did not.

She’s now into her third year. And some things are finally clicking. She’s moved up to being consistently ranked second on her team. But last week something else happened. Something amazing.

The meet started out a little shaky for all the girls as we were visiting another school with equipment much older than ours. Plus the mat exploded with collected pollen every time someone landed on it. Not the best conditions.

It took Ashley a couple of tries to hit eight feet, then eight feet six inches. She moved on to nine feet, which on her third try she cleared. At nine feet six inches, I could tell she was nervous. Really nervous. This was her personal best so far. I think in her mind, this was as high as she could see herself going.

She missed the first attempt.

On the second attempt, she cleared the bar but twisted too much in the air. Her pole crashed against the bar while her body landed half off the side of the mat. Her cleats cut her calf and she came around the side limping. But somehow the bar hadn’t fallen. The jump counted. She cleared nine feet six inches and was called to line up for a ten-foot attempt. No girl on her team had cleared ten feet at a meet. And Ashley had never even gotten it at practice.

She limped to the starting place and went through her normal routine of lifting her pole up in the air and putting it down. She rubbed her sore leg. She marched in place and slid her sweaty palms down her shorts.

She popped off the mat and erupted in a jubilant scream I’ll probably never forget. She ran from behind the mat straight into the arms of a mama who may or may not have been making a slight spectacle of herself. Screams of joy. Tears of amazement. Three drops of, well, you know.

It was mind-blowing. She took first in the meet and set a new school record. This girl, who for years struggled in this sport, was now the new school-record holder.

Those things are amazing. But they aren’t what make me most proud of her. What stirs my heart the most is the fact she just kept showing up at practice and giving it her all.

She just kept showing up. Running down that track, planting her pole, twisting her body, trying to clear the bar, crashing onto the mat, and receiving feedback from her coach. And then putting her coach’s instruction into practice. Run after run. Attempt after attempt. Day after day. Sometimes succeeding, sometimes failing, sometimes feeling great, sometimes in pain, most times in last place — but no matter what, she was committed to showing up to practice.

If we want to know what to do when it matters most, we’ve got to be committed to showing up to practice.

A Best Yes is a wise yes. The Bible reminds us,

Get all the advice and instruction you can, so you will be wise the rest of your life. — Proverbs 19:20 NLT

Wisdom needs to be practiced day after day if we are going to know how to apply it to the Best Yes decisions when they come.

The Woman of Wisdom

In Proverbs chapter 9, we see two distinct opportunities. We are all students trying to pursue a journey of wisdom. The choices we make will determine if we end up with the virtue of wisdom or the vice of folly.

The teacher in Proverbs personifies the virtue of wisdom and vice of folly as women. Much like we personify liberty as Lady Liberty, here the writer is personifying wisdom and folly. We need to identify with these passages as students of the patterns being described. The woman of wisdom is described in verses 1-6:

Wisdom has built her house; she has hewn out its seven pillars. She has prepared her meat and mixed her wine; she has also set her table. She has sent out her servants, and she calls from the highest point of the city, “Let all who are simple come in here!” she says to those who lack judgment. “Come, eat my food and drink the wine I have mixed. Leave your simple ways and you will live; walk in the way of understanding.” — Proverbs 9:1-6

Now let’s look at the woman of folly described in verses 13-18:

The woman Folly is loud; she is undisciplined and without knowledge. She sits at the door of her house, on a seat at the highest point of the city, calling out to those who pass by, who go straight on their way. “Let all who are simple come in here!” she says to those who lack judgment. “Stolen water is sweet; food eaten in secret is delicious!” But little do they know that the dead are there, that her guests are in the depths of the grave. — Proverbs 9:13-18

Isn’t it interesting that though these women are vastly different, they have some similarities?

They are in the same location — the highest point in the city. They both have the same goal — to get people to come into their houses to eat and drink with them.

They both say the same thing at first — “Let all who are simple come in here!”

But what they have to offer is vastly different. Wisdom has put in the preparation time. She has done the work and she has something legitimate to show for it. Folly has not. She was lazy. She has not done the work, therefore she either has nothing to offer or can only offer stolen goods.

As I look at the descriptions of each of these women, I’m struck by the words that characterize their lives. The woman of wisdom builds and hews out pillars, which tells me she cares about and pays attention to the details. She is prepared and organized and gets others to help her. Her ways lead to life and understanding. But the woman of folly is loud, undisciplined, and lacks knowledge. She sits around and doesn’t make progress. Therefore, she doesn’t have much to offer because she isn’t prepared. Her offerings are stolen. Her ways lead to death.

How do we do that? Well, first the Bible tells us if we lack wisdom to ask for it (James 1:5). God will give us wisdom just as He gives us muscles. But just because I have muscles doesn’t mean I can do all that my daughter with muscles can do. She has trained her muscles to be strong and capable so when she calls on them, they don’t fail her.

Likewise, we’ve got to train our wisdom muscles to be strong and capable so when we need them most, we’ll know how to use wisdom. We’ve already talked about knowledge, insight, and discernment and how these help us apply wisdom to our decisions.

Proverbs 2:1-11 gives us clear instruction on the way to have wisdom, use wisdom, and be protected by wisdom:

My son, if you accept my words and store up my commands within you, turning your ear to wisdom and applying your heart to understanding — indeed, if you call out for insight and cry aloud for understanding, and if you look for it as for silver and search for it as for hidden treasure, then you will understand the fear of the Lord and find the knowledge of God. For the Lord gives wisdom; from his mouth come knowledge and understanding. He holds success in store for the upright, he is a shield to those whose walk is blameless, for he guards the course of the just and protects the way of his faithful ones. Then you will understand what is right and just and fair — every good path. For wisdom will enter your heart, and knowledge will be pleasant to your soul. Discretion will protect you, and understanding will guard you.

But we’ve got to show up to practice.

Excerpted with permission from The Best Yes by Lysa Terkeurst, copyright TerKeurst Foundation.

Today, let’s ask the Lord for wisdom (James 1:5), and let’s show up to practice walking in it! Come join the conversation on our blog. We’d love to hear from you about wisdom! ~ Devotionals Daily