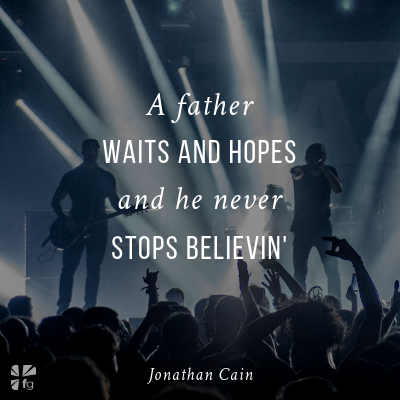 Editor’s note: Jonathan Cain is the keyboardist of the beloved, bestselling rock band Journey. He helped pen the band’s iconic anthem “Don’t Stop Believin’,” the most downloaded song of all time. In his book, likewise titled Don’t Stop Believin’, Cain reflects both on his time with the band and on his own journey filled with failure, tragedy, hope and a return to faith.

There are two ways to look back on the canvas of your life. You can let the dark mistakes and misfortunes cover the bright moments and miracles, or you can let the colors emerge and brilliantly cover the old. I try to do the latter, especially when it pertains to those to whom I’ve been closest. Steve Perry is one such person.

There are many “what ifs” and “should’ve beens” when one looks back on the days in Journey when we waited for word from our lead singer, but there are also the songs we had created. There have always been the songs. Pieces of us put into melodies and threaded together by expressions of love and longing and hurt. So many of these musical pieces have stood the test of time.

When Steve Perry needed a break from Journey after Raised on Radio, there was unfinished business between him and me, just as there had been between John Waite and me. Bad English spelled the end with Waite, as Trial by Fire did with Steve Perry. At least in some ways.

We wrote “When I Think of You” about the passing of Steve’s mother, and I couldn’t help but think of my father as we worked on it. I can focus on the fact that even though it’s one of my favorite ballads, it was never performed live with Steve. Yet I choose to reflect on the majesty of the song, how it put some hope into the world, as did many of our other tunes. I witnessed this hope firsthand when I performed “When I Think of You” at a funeral for a friend from church. As I sang it, I thought of Steve’s wonderful mother.

One of the last songs we wrote for the new album was the title song “Trial by Fire.” Perry said he wanted to write a song about the “jars of clay” passage in the Bible, 2 Corinthians 4:6–7:

“For God, who said, ‘Let light shine out of darkness,’ made his light shine in our hearts to give us the light of the knowledge of God’s glory displayed in the face of Christ. But we have this treasure in jars of clay to show that this all- surpassing power is from God and not from us.”

In so many ways, that was Steve Perry’s life story right there. It’s his “Where have you been, Steve?” song. I think he had finally come to realize how blessed he truly was, and it wasn’t because of his precious mother. He had sung all those songs to her, yet ultimately it was somebody else who wanted his attention and thanks.

This all- surpassing power is from God and not from us.

I understood what Steve Perry was talking about, especially since I had come to realize I had spent my life making music for my father— and he was no longer here.

What about me, Jon?

God was telling us something. It wasn’t about our amazing talents or how hard we worked. It was how much Steve and I were blessed, and how Journey had been blessed for many years. Those songs we wrote truly were treasures in jars of clay.

Steve finally got this. It took me a little while before I did too.

Being in the studio once again with Steve Perry, at work to reclaim our magic, I already knew some important facts about life.

You have to be prepared. You have to keep going down the road ready to jump when your time comes. That’s what I had done my whole career, from moving to Hollywood to deciding to write songs to listening and studying and pondering and trying this and that and wondering what sound or song might work.

After Steve Perry called with the idea of getting Journey back together, I jumped because I was ready. We were excited to see the songs come effortlessly. It was what we loved to do. Every single song we created was like the ones before— written with the desire to create a classic.

As we talked, Steve said something quite profound, something he said often: “Timeless music takes time.”

We both took our craft very seriously. We considered the songs we had written with Neal Schon to be timeless. We never worried about the critics. We wrote to the hearts of those in our audiences who sang our songs with us night after night.

It’s one thing to write hits. But what would it be like to write one that could last for years and even decades?

All I knew was that good songs had to have certain qualities. They needed to go somewhere and take the listeners on a voyage. They had to have a sense of hope, even in seemingly hopeless situations. That’s why the world loves them.

Steve Perry could take a good song and take people along on a trip. He could take a melody and make it soar. This was the beauty and magic of Journey— to take a tune that meant something to people and make it majestic.

It’s like a father who plants seeds in his children and then waits, watching them take root and then grow. A father waits and hopes, and he never stops believin’.

How has music spoken to you in different seasons of your life? How does this idea that “timeless music takes time” resonate with you in other aspects of your life? We’d love to hear your thoughts in the comments!