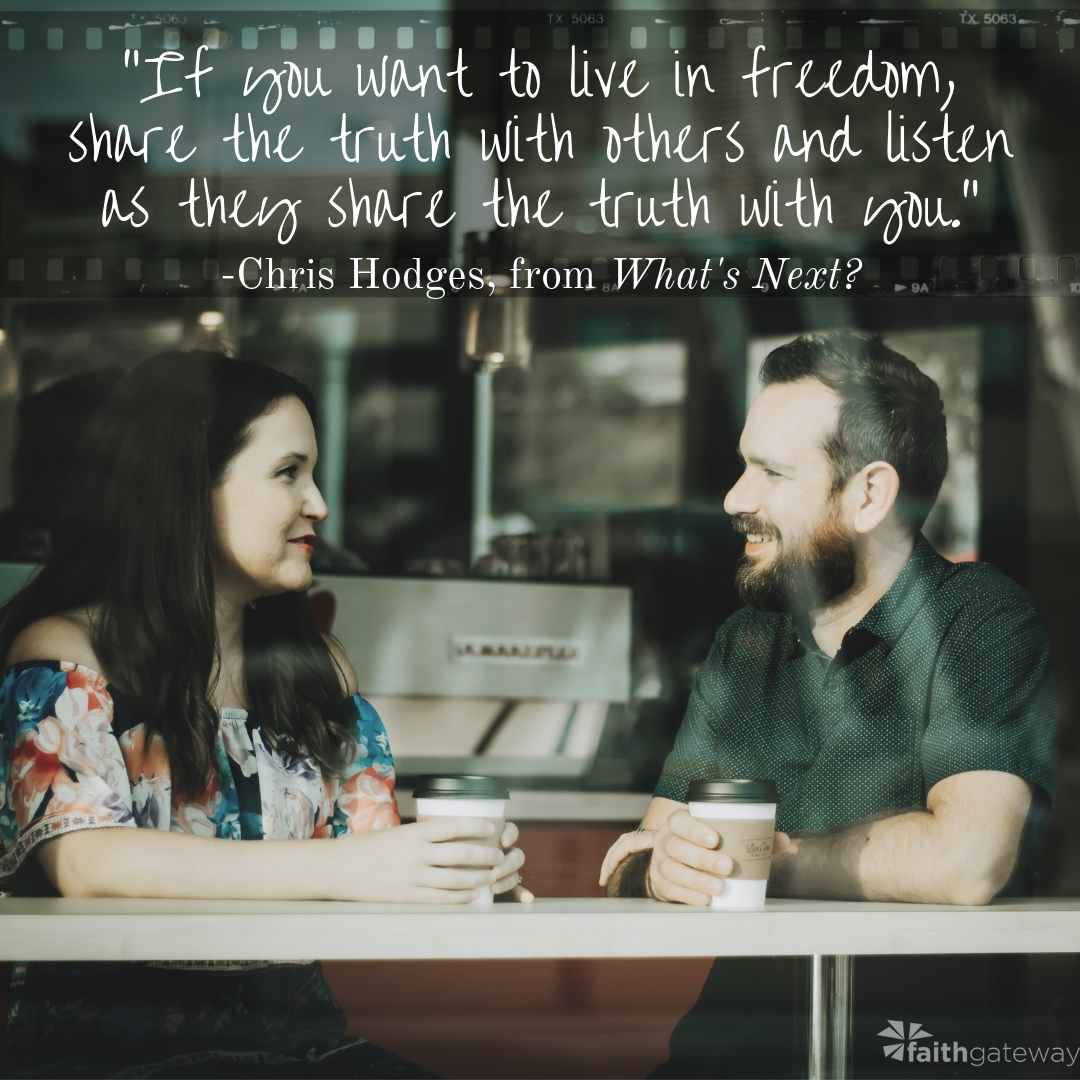 From the beginning of creation, God has asked for honesty — not perfection.

I suppose it was easy for Adam and Eve to be honest with God at first, because they had not yet disobeyed Him. They had no secrets or hidden agendas, only full transparency with each other and with God. But after they ate the fruit from the Tree of Knowledge of Good and Evil, they immediately wanted to cover up their shame, both literally with fig leaves and figuratively by hiding from God.

Adam and Eve, of course, are not the only ones who tried to hide from God and cover up their sin. After David committed adultery by sleeping with Bathsheba, he tried to cover it up by having her husband killed. Finally, with the help of God’s prophet Nathan, David came to his senses, confessed his sin, and repented before God. Expressing his repentant heart in Psalm 51, David observed,

For I was born a sinner — yes, from the moment my mother conceived me. But you desire honesty from the womb, teaching me wisdom even there. — Psalm 51:5-6 NLT

Another version of Scripture translates “honesty from the womb” as “truth in the inward parts” (Psalm 51:6 NKJV) to reinforce this truth. No matter how we express it, though, the requirement is the same: God requires complete and utter openness and honesty from His children. He knows that because He has given us free will to choose, we have a choice about not only what we do, but also who and what and how we tell about what we’ve done. Because He is a holy God of complete and absolute truth, He desires and requires truth from us.

With our sinful nature activated by Adam’s and Eve’s sin back in the Garden, we all tend to create our own fig leaves and cover up our mistakes and indiscretions. We don’t want to face the truth about what we’ve done and the impact our selfishness has had on others. We don’t want to own up to the consequences of our actions or face the punishment that comes with disobedience. It’s so much easier to hide — from ourselves, from others, from God — and refuse to engage with the truth.

However, if we want to live in the fullness of God’s freedom, we must commit to living in truth. Jesus told His followers,

If you hold to My teaching, you are really My disciples. Then you will know the truth, and the truth will set you free. — John 8:31-32

At our church we like to say that you’re only as sick as your secrets—whatever you’re hiding, running from, denying. It could be an addiction, a mistake from your past, an ongoing battle with gossip or shopping or gambling—whatever destructive habit consumes your time, energy, and attention and pulls you away from God. You probably feel deep shame. You likely have regrets. You may feel trapped and unsure of how to get unstuck.

But the answer is simple, really. Face the truth. Tell the truth. Accept God’s truth.

King David had secrets — certainly his affair with Bathsheba was a big one — but he also had an incredibly intimate relationship with God. I’m fascinated by the way God was so merciful to David, arguably showing the shepherd-boy-turned-king more grace than other figures in Scripture. What was David’s secret? What did he do that God liked so much? Why did God call David “a man after my own heart” (Acts 13:22)?

Here’s my theory: David’s relationship with God was deep and intimate because he was honest, transparent, and quick to repent. If we return to the psalm he wrote after his sin with Bathsheba, we see it’s clearly a prayer of repentance. He begins by simply asking God to have mercy on him, acknowledging his sin outright — not just his adultery but his very nature from birth — along with his awareness that God desires the truth (Psalm 51:6).

So many people never find freedom because they’re committed to concealing the truth. They work hard to hide from it because it feels too uncomfortable, too painful, too humbling to face. Rather than acknowledge the truth before God, they choose to handle their past mistakes, current problems, and secret hang-ups themselves.

Have you ever found yourself going this route? You put your sin in a box, lock it up, and shove it deep into the recesses of your heart. Or you sweep it under the rug, constantly fighting to keep it from crawling out again. You can try to bury it, but here’s the problem: it doesn’t stay buried. It’s like trying to hold a beach ball under the surface of the water. Momentarily invisible, it can be held underwater only so long before it shoots up and breaks the surface again for all to see.

What does this look like in our everyday lives? It’s when we minimize an unpleasant truth and tell ourselves, “It’s no big deal. It’s not so bad.” Of course, if that were true, then why does it still bother us? Why does it linger in our minds?

Or it’s when we rationalize the truth about our sinful mistakes. “Nobody’s perfect. This isn’t as bad as what others have done.” While this may be true — we can always find someone who has made either better or worse choices than ourselves — it doesn’t let us off the hook. Justification of our wrong choices becomes nothing more than a temporary smokescreen.

It could also be when we try to bury the truth by compromising. “If you feel bad about what you did yesterday, then just lower your standards,” which leads to “I’m a bad person, and that’s just the way it is.” Pretty soon, as we lower our expectations for our life, for our future, we find ourselves growing cynical and hard-hearted. Such a bitter mindset causes us to beat ourselves up. We begin living in the land of regret, always looking in the rearview mirror of our lives, missing out on the present moment and all God has for us. Whether consciously or subconsciously, we administer self-punishment. We condemn ourselves and feel even worse. “No one will love me if they know who I really am and what I’ve done. There’s no way anyone could forgive me.”

Despite how quickly he usually repented, David also went down this dead-end path a time or two. In another psalm, he wrote,

My guilt has overwhelmed me like a burden too heavy to bear. My wounds fester and are loathsome because of my sinful folly… I am feeble and utterly crushed; I groan in anguish of heart. — Psalm 38:4–5, Psalm 38:8.

The weight of our secrets can crush us, especially if we’re piling on self-contempt, shame, and condemnation. Sometimes this burden manifests itself physically in the form of an illness or chronic condition. For example, I suspect depression can be a form of self-inflicted punishment in certain situations. We sin in some way and bury the truth, leading us to expect the worst and feel like that’s all we deserve. Set up for failure, we create a self-fulfilling prophecy. “I don’t deserve to succeed,” we tell ourselves.

Sometimes, though, instead of internalizing the truth of our sinful mistakes, we blame others. This is a well-known, timeless tactic. In fact, this strategy is as old as creation! Going back to Adam and Eve, we see them blaming each other as well as being the first to point out, “The devil made me do it!” Eve told God, “The serpent deceived me, and I ate” (Genesis 3:13). In other words, “It’s not my fault!”

Whether we admit it or not, we all like to blame others — myself included. We accuse others and excuse ourselves. We’re victims of circumstances beyond our control. We pass the buck and slip into the victim mindset, which often sends us deeper into denial — and farther away from the truth and freedom God desires for us.

YOUR NEXT STEP ON THE JOURNEY

No matter where you may be, take the next step toward living in freedom by investing extra time and attention into relationships with others who share your values, love you, and love God. They may be from your small group at church, your neighborhood, your apartment building, or your mother’s-day-out program. Be honest with them. Ask them to be accountability partners with you. Tell them you need their help so you can grow.

I know firsthand how powerful this kind of honesty in a relationship can be. You may recall that prayer is a bit of a struggle for me sometimes. During a particularly dry spell, I once had one of my closest friends, who was also a pastor, meet me every morning for three weeks. Every day at 6 a.m., we met and then went into separate rooms for an hour to pray. Knowing I had to meet him and that he, too, was praying while I was praying made a huge difference. He came alongside me and helped me become a stronger prayer warrior.

Are you weighed down by the burden of the truth you haven’t told? Today, we can start fresh with God and just tell Him the truth without making any excuses. He’s a good Father who loves us and He wants us to be set free! Come share your thoughts with us on our blog. We want to hear from you! ~ Devotionals Daily