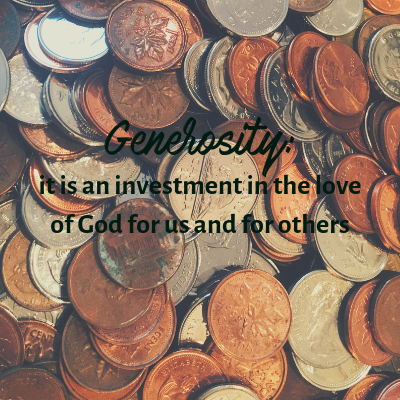 True confession? I am not a very compassionate person.

I once asked a college friend if I should pray for God to help me care more about other people, or if I should just accept that I don’t. My focus on myself was keeping me from having concern for the well-being of others. This kind of deeply rooted indifference made giving tricky. We often assume we should give to things that we care about deeply. But what if we just don’t care at all?

Jesus said, “Where your treasure is, there your heart will be also.” He meant that wherever we send our money, our feelings and emotions will eventually go there, too. If we send money toward the things God cares about, our hearts will start to look more like God’s.

Generosity is just a means to an end; it is an investment in the love of God for us and for others.

For example, I never really cared about modern-day slavery until I began giving to International Justice Mission. Slowly, over time, I began to yearn for freedom for everyone in captivity. I never cared much about children trapped in poverty until I began giving to Compassion International. Slowly, over time, I began to ache for every child in need to be fed, educated, and taught about Jesus. And I never cared much about people who didn’t have the Bible until I sponsored a Bible translation project through the Seed Company. Now I have a deeper passion that all people on earth would be able to read Scripture in their native language.

My heart was often cold and indifferent to others. But giving is like a seed planted in the barren soil of indifference. If we plant in faith, love will begin to grow and will displace our indifference. How do we obtain the true riches of love? We give in faith, asking God to reshape our hearts in the process.

If a marriage counselor is helping a couple in a bad marriage, he or she would never tell the struggling couple to wait until they feel more love before serving each other. The counselor would say, “Start acting as if you’re in love, and the feelings will follow.” Giving is the same way. If we want God’s heart, we give to the things He cares about. He honors our steps of faith by changing our hearts and aligning our passions with His.

This is a process. It took me four years of consistent giving to the poor before God awakened a heart for the poor in me. But our faithfulness and obedience, in joy, does lead to heart change.

One time, Jesus told a story that reinforced the importance of following God’s passions as we give (Luke 16:19-31). He explained that a rich man had splendid clothes and fine food in his beautiful home. Outside was a homeless beggar, Lazarus, covered in festering sores, hungry, and neglected. The rich man never actively harmed Lazarus, but he never tried to help him either. Both eventually died. Lazarus went to Heaven; the rich man found himself in eternal torment. He asked for relief and was reminded that he had his share of comfort during his life on earth. He asked for his living brothers to be warned, but he was told that if they hadn’t listened to the Scriptures’ command to love the needy, they wouldn’t listen to a message from the afterlife. The basic message to the rich man was: “You knew what to do, and you missed your chance!”

Notice that Jesus didn’t ask whether the rich man felt “called” to help the poor. We can almost hear the rich man telling a friend, “You know, I never felt led to serve the poor. I know that some people really care about poverty, but it’s just never been my thing.” He almost surely thought of himself as a generous man, and his dinner parties were probably fantastic (it’s easy to be generous to our close friends). Despite this, he still failed to hear God’s instruction to serve the poor.

The sobering question that Jesus wants us to ask after hearing this story is, “Am I the rich man?”

(Note:  As we know from the full witness of scripture, you cannot earn your way into Heaven by the good works of helping the poor.  Helping the poor is evidence that God’s grace has transformed your heart, but it does not save you!  Only the sacrifice of Jesus Christ can save you.  See Ephesians 2:8-9.)

In the parable, the rich man missed the boat.  But Jesus invites us to a different outcome, one where we let our hearts get shaped by His love and His generosity.

In Luke 16 we’re reminded about giving to the poor; elsewhere in scripture we’re given the additional tasks of strengthening believers in the body of Christ, and saving the lost through evangelism.  As we give toward these three tasks, God shapes and molds us into the image of His son, Jesus Christ.  What a gift!

Adapted by John Cortines from his book with Gregory Baumer True Riches – What Jesus Really Said About Money and Your Heart.

Are you a compassionate person? Do you feel called to give? Let’s start staring at Jesus. And, if we’re giving, let’s give more. If we’re not yet giving, let’s start today so we can begin to look more like Christ! Come share your thoughts with us on our blog. We want to hear from you! ~ Devotionals Daily 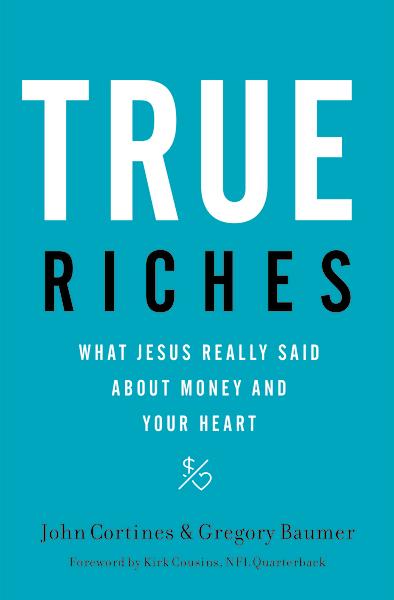 Shop the book at the FaithGateway Store!