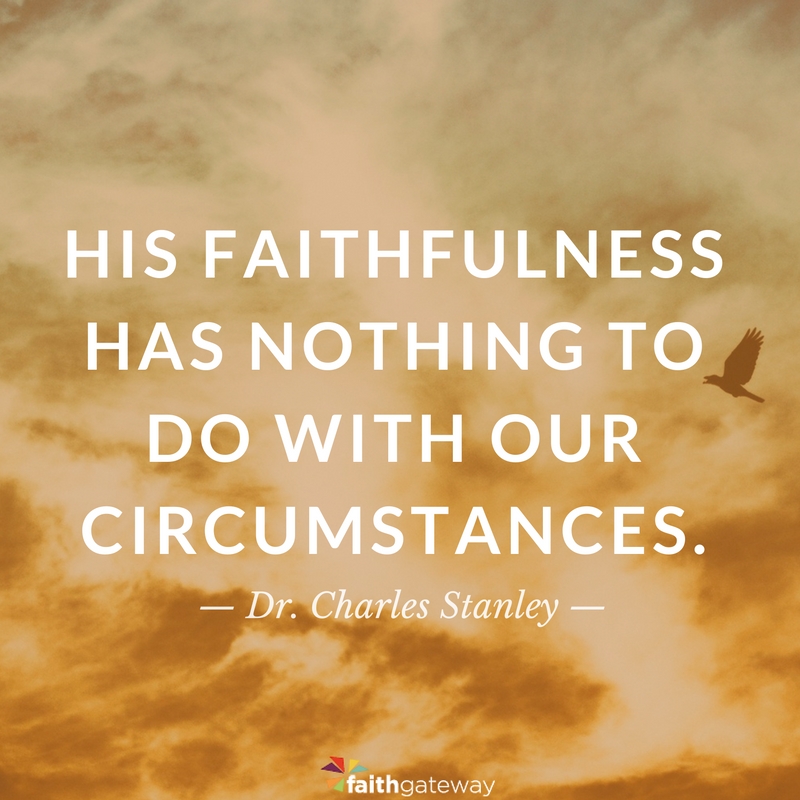 The most important lesson we can learn as believers is to trust God. Nothing else compares with this — nothing comes close.

When you know you are doing what God has called you to do, there is a sense of security and surety surrounding your life that is obvious to others. Decisions, while they may seem tough, are made effectively because your mind and heart are focused not on what you want to do but on what God wants. There is a huge difference.

When we push to gain an answer to our prayers or to have something we feel we need, there is always a feeling of uneasiness within us. It should never be hard to trust the Lord because His love for us is so great. However, unless we know for sure that we are walking in step with Him, we will constantly think, Lord, am I doing the right thing? Did I make the right decision? Are You okay with what I’m doing?

I’m not talking about asking Him to affirm you. God wants and even listens expectantly for us to pray asking Him to draw us close to His heart.

O LORD, You have heard the desire of the humble; You will strengthen their heart, You will incline Your ear. — Psalm 10:17

When it comes to trusting God unconditionally, there are several people in the Bible whom we could list as examples — Moses, David, Joseph, Isaiah, Jeremiah, all of the minor prophets, and many in the New Testament. While there were times when they demonstrated great faith, there were also moments when their faith and trust in God waned. Moses became angry with the people and hit the rock with his staff to bring forth water for them to drink. David made a horrendous decision when he chose to count Israel’s fighting men — those who could go into battle. The prophet Elijah stood on Mount Carmel and defeated every one of the prophets of Baal. Yet hours later he was on the run in fear of losing his life at the hands of a wicked queen. Four hundred and fifty false prophets could not accomplish what one angry woman was able to do — frighten God’s messenger to the point of running away from where God had placed him.

When does strong faith — immovable faith — turn into fear? The answer is easy: when we take our eyes off of the Source of our strength and place them on our circumstances, personal desires, or things that we know are not God’s best.

Anytime we pause to consider a way other than God’s way, we run the risk of becoming frustrated.

There was no reason for Elijah to become besieged with fear. God had gained a great victory, and His prophet was at the hub of the activity. However, this did not stop the enemy from harassing him with thoughts of death and fear. Instead of going out to meet Jezebel, he headed off in the opposite direction and ended up hiding out in a cave explaining to God how he arrived at this distressing point.

I have been very zealous for the LORD, the God of hosts; for the sons of Israel have forsaken Your covenant, torn down Your altars and killed Your prophets with the sword. And I alone am left; and they seek my life, to take it away. — 1 Kings 19:10

Can you imagine these words coming from God’s prophet — a man of such tremendous faith that he boldly challenged several hundred false prophets, saying,

There was no answer from Baal because there is only one God and that is the Living God, the God of the Bible, the God who loves us and has saved us with His mighty outstretched hand.

I love what God said to Elijah as he was hiding in the cave. He did not acknowledge His servant’s lack of faith. It was obvious that Elijah was in a narrow place — emotionally, spiritually, and physically. He was frightened. He didn’t think he could go back because he was sure that he would be killed. And he did not know how he would go forward, but God knew exactly what He would do to refresh, renew, and restore the faith of His prophet. The Lord commanded Elijah:

Go forth and stand on the mountain before the LORD.

God did not have to announce His coming. All of nature brims with the awareness of who He is. His coming was so great and mighty that the mountains were torn and shaken by His presence. He could have leveled the earth surrounding the prophet, but a display of His omnipotence was not His intent. It was the gentle whisper that humbled Elijah and reminded him whom he served. Even though he recounted his story to God, the Lord did not acknowledge it. He had moved way beyond the point of citing an evil queen for the wrong she had done. He knew her end. He was more interested in getting His prophet back on track.

God sent His prophet back into the heat of the battle, and He often does the same thing with us. Even though Elijah had assumed the moment he left his base camp on Mount Carmel all was over, God had a different plan.

His faithfulness has nothing to do with our circumstances.

Elijah, like we may do, lost sight of this. Fear struck a chord in his heart, and suddenly his courageous spirit and well-trained faith evaporated. But notice what God did not do. He did not major on Elijah’s weaknesses. He did not chasten him for becoming weak under pressure and when threatened by the enemy. Instead, He ordered him back to the place that he had left. There he would begin a new work — one that would lead to an even greater ministry and one that would be passed on to a young prophet named Elisha. In doing this, God gave His prophet a refresher course on His greatness, faithfulness, power, and infinite wisdom. The scene is reminiscent of what the psalmist wrote in Psalm 18:

He rode upon a cherub and flew; and He sped upon the wings of the wind. He made darkness His hiding place, His canopy around Him, darkness of waters, thick clouds of the skies. From the brightness before Him passed His thick clouds, hailstones and coals of fire. The LORD also thundered in the heavens, and the Most High uttered His voice, hailstones and coals of fire. He sent out His arrows, and scattered them, and lightning flashes in abundance, and routed them. Then the channels of water appeared, and the foundations of the world were laid bare at Your rebuke, O LORD, at the blast of the breath of Your nostrils.

He sent from on high, He took me; He drew me out of many waters. He delivered me from my strong enemy, and from these who hated me, for they were too mighty for me. — Psalm 18:10-17

We may think that our enemies, whether real or imagined, are too great for us, but they are not for God. He is over all things. And we can trust Him because He is trustworthy — this is His nature, His character, and one of His many attributes.

When threats and enemies rise up in our faces, we must trust God and obey Him. Even if our foes make us want to run for cover! God’s faithfulness is so much bigger than our circumstances. Come share your thoughts with us on the blog. We want to hear from you about focusing on what God wants from us even in the face of seeming danger! ~ Devotionals Daily