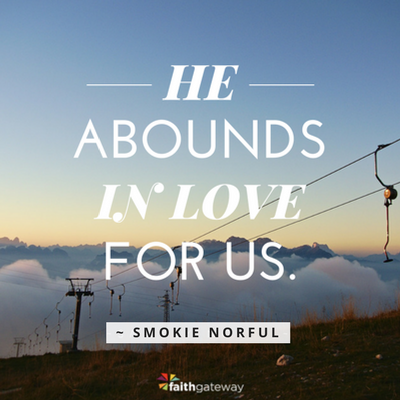 When people walk down the street, most of them instinctively look at their reflections in the windows. It’s a knee-jerk reaction. I believe there are two mirrors in each of our lives. One reflects the world’s values; the other reflects God’s truth about us. Far too often, we’re gazing into the wrong mirror. We’ve drawn conclusions — about ourselves, about God, and about our purpose in life — based on faulty, distorted information.

The world’s mirror is similar to a carnival mirror, reflecting distortions and untruths to whomever stands before it. We can appear tall and skinny (We like that one!), or we can appear short and fat. Another one can reflect our images in ripples, like a potato chip. Though we laugh at each other and ourselves in these carnival moments, having a distorted self-image is serious business — it ruins our motivation, steals our joy, and warps our relationships.

The mirrors we see each day scream that success, pleasure, approval, physical appearance, intelligence, and our “cool factor” or “swag” determine who we are and how high we can go. These metaphorical measuring sticks can’t possibly result in strength, stability, hope, or security. Instead, they produce either shame or pride. When we think we’re doing better than the person next to us, we feel superior. We’ve arrived! But when we realize the other person is smarter, richer, better looking, and has more friends, we feel like a failure. Some of us habitually stay in one condition or the other, but most of us vacillate from pride to shame, then back again, several times a day.

Advertisers have gone to great lengths to create powerful verbal and visual concoctions of dissatisfaction and hope. Dissatisfaction with who we are and what we have comes first. Then, we hope the product or service will make us happy, successful, and popular. For instance, women long to look like the models in magazines, but we all know these models have been airbrushed and digitally altered to make them artificially gorgeous. Nobody actually looks like that! I’ve even had graphic designers Photoshop my pictures for album covers and promotional pieces to make me look taller, thinner, or younger. One of the pictures was altered so much, I looked like a teenage boy! I told the designers to go with the real, middle-aged me. A study of models revealed that the most envied women on the planet often suffer from depression, anorexia, bulimia, loneliness, and other problems of a devastated self-conception.

We constantly compare ourselves to others. As a result, we spend too much time, money, and energy trying to manage our image. We wear “masks” to impress people because we’re terrified others will see the real person underneath. We don’t want anyone to know how fearful and insecure we are. Eventually, we may not even recognize our true selves. We are constantly seeking our authenticity, but our flawed sight blinds us.

Even the heights of beauty, fame, and wealth can’t fill the void of an empty heart. We all know people who appear to be beating the system. They might be music moguls, business tycoons, head-turning beauties, or brilliant scholars. Everyone looks at them and marvels. Even these people, though, realize they aren’t what they project to the outside world. In a famous Vanity Fair article, Madonna confessed that every new song she released made her feel alive, but in between, she felt lost and alone. She told the reporter, “My drive in life is from this horrible fear of being mediocre. And that’s always pushing me, pushing me. Because even though I’ve become Somebody, I still have to prove that Somebody. My struggle has never ended and it probably never will.”1

Chris Evert, the professional tennis star, admitted that she struggled with her sense of inadequacy and used victories on the court as a salve. She said:

I had no idea who I was, or what I could be away from tennis. I was depressed and afraid because so much of my life had been defined by my being a tennis champion. I was completely lost. Winning made me feel like I was somebody. It made me feel pretty. It was like being hooked on a drug. I needed the wins, the applause, in order to have an identity.2

If we live to impress the people around us, it would be easy to conclude that God would be our harshest critic. If we need to wear a mask around anyone, we might think we need to hide ourselves from God! That’s what Adam and Eve did when they sinned in the Garden and wore fig leaves to hide their nakedness. The paradox of the Christian faith is that God knows every detail about us, even our deepest thoughts, and He loves us still. We can’t hide from Him — a paradoxical fact that can be deeply comforting yet terribly threatening.

King David knew both sides of the omniscience of God: He knows everything about us. David wrote:

O Lord, You have searched me and You know me. You know when I sit and when I rise; You perceive my thoughts from afar. You discern my going out and my lying down; You are familiar with all my ways. Before a word is on my tongue You know it completely, O Lord. — Psalm 139:1-4 NIV, 1984

Does He know our selfish thoughts? Certainly.

Does He know our deepest and most sinister desires? Of course.

God knows it all. Nothing is hidden from His sight.

But He is quick to forgive and abounds in love for us. He doesn’t wink at our sin. He forgives it. He doesn’t make excuses for our selfishness. He sent Jesus to pay the price for it. In an article in Christianity Today, Mark Galli explained, “The very thing that makes us feel trapped — God’s omniscience — is the very thing that reveals the depth of God’s grace. If we can muster the courage to allow God’s omniscience to judge us, we will see that before and after the righteous judgment, there has been the omniscience of grace.”3

Because of grace, we can be fully, totally, and completely honest with God about every sin in our lives. The Cross is the promise that God won’t condemn us. If we had to earn God’s approval, we’d be in deep trouble because we can’t meet His standard of holiness. But Jesus did, and Jesus does. When we receive the forgiveness offered in the sacrifice of Christ’s death on the Cross, God puts all our sin on Jesus and puts all of His righteousness on us. It’s the greatest exchange of grace in the history of the universe!

Excerpted with permission from Take the Lid Off by Smokie Norful, copyright W. Ray Norful Jr.

Trailer: Take the Lid Off

God knows every detail about us, even our deepest thoughts, and He loves us still. That’s grace. We can’t earn it, don’t deserve it, and can’t escape it once we take Him as our Savior! Come share your thoughts on setting aside the mirror of the world and looking into the mirror of God’s grace instead. We would love to hear from you! ~ Devotionals Daily