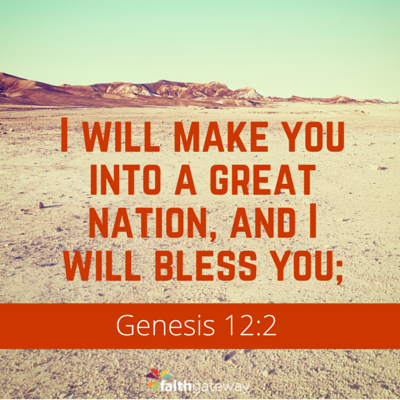 Israel’s Mission is a study for those who are serious about the study of the Bible. Lesson one of this video study is being made available this week. Go to Study Gateway to continue with the rest of the book. Your first 30 days on Study Gateway are FREE! ~ Fred Bittner, FaithGateway Bible Study

Abraham and Sarah and Three Strangers

The Bible opens with the story of God bringing order out of watery chaos. His amazing creative work accomplished, God entrusted it to the care of our human ancestors, Adam and Eve. He gave them the responsibility to care for it and the freedom to choose how to rule and manage it. From that point on, the biblical story reveals a series of disappointing choices made by God’s human partners that resulted in the return of chaos to God’s created order.

Adam and Eve chose to eat from the one tree God had forbidden. Their oldest son, Cain, murdered his brother, Abel. With each passing generation, humankind became increasingly corrupt and wicked. By the time Noah entered the story, the heart of God was deeply troubled because

every inclination of the thoughts of the human heart was only evil all the time. — Genesis 6:5

In order to end the evil, God wiped the human race from the face of the earth, sparing only the family of Noah because he was a righteous man who walked with God. But even the cleansing of the Great Flood didn’t change things for long. Noah’s grandchildren refused to “fill the earth” as God had instructed, preferring to settle together and make a name for themselves by building a city with a great tower — as if to challenge God Himself (Genesis 9:1-11:8).

Surprisingly, God did not give up on His human partners! After generations of silence, the story picks up again with Terah, Abraham’s father, leaving Ur of the Chaldeans (believed to be near the city of Mosul in northern Iraq) to move his family to Canaan. They did not complete the journey, but settled in Harran, a few miles north of today’s Turkish/Syrian border (Genesis 11:27-32). After Terah died, God commanded Abraham to leave his present life — land, community, and even family — and “go to the land I will show you.” The offer came with the promise of great blessing — a message of hope and mission not just for Abraham, but for him to be a conduit of God’s blessing to all people on earth (Genesis 12:1-3).

God was asking Abraham to turn his back on the life he had known and to become His partner in redeeming a world in chaos! In a dramatic reversal of the choices many earlier characters in the biblical story made, Abraham committed himself to do what was right and just in the eyes of the Lord. Responding in faith, he left Harran. From that point on, Abraham would be different; he walked God’s path and taught his children to do the same:

Then the Lord said… “For I have chosen him, so that he will direct his children and his household after him to keep the way of the Lord by doing what is right and just, so that the Lord will bring about for Abraham what He has promised him.” — Genesis 18:17, Genesis 18:19

Whereas Adam and Eve failed to faithfully obey God, Abraham eagerly demonstrated what a faithful partnership with God looks like. By choosing to be God’s partner in restoring shalom to a world in chaos and bringing alienated sinners back into relationship with God, Abraham became a model for all who have come after him. The Jewish writer, Matthew, certainly intended to communicate more than just biological descent when he began Jesus’ family tree with Abraham. Although Abraham could never effect the changes in a sinful world that the Messiah did, this Bedouin nomad lived in a way that showed how the world could be when God’s people live according to his design. Since everyone who places his or her faith in Jesus is in effect a child of Abraham (Galatians 3:7-9), let’s discover more about this faithful partner who lived to be a blessing to everyone he met.

The Very Words of God

The Lord had said to Abram, “Go from your country, your people and your father’s household to the land I will show you. “I will make you into a great nation, and I will bless you; I will make your name great, and you will be a blessing. I will bless those who bless you, and whoever curses you I will curse; and all peoples on earth will be blessed through you.” — Genesis 12:1-3

In the Bible story, the Lord is portrayed as the One who redeems His people and calls them to be His “partners” in redeeming others. In Western Christianity, we tend to think of redemption as being synonymous with salvation. While there is no doubt that the reality of God’s salvation is included in what it means to redeem, the word actually has a broader meaning in the context of the Bible.

Talk for a moment about what is involved in redeeming something or someone. What examples of redemption can you think of (in history, contemporary life, or the Bible)? What does the act of redeeming indicate about the value of what is redeemed? Who redeems, and why? What is the response to and result of redemption? What insight do these observations give you into the broader meaning of redeem?

Life in an ancient city

The patriarch’s role and responsibilities

Using the resources of the Father’s house

Redeem with everything you’ve got!

Extending the Blessing of the Beth Ab

Life in the ancient Middle East centered around the extended family or household, which was called the “Father’s house” or beth ab in Hebrew. Such a family could comprise thirty, fifty, or more people representing several generations: the head of the family (known as the patriarch), his wife or wives, his younger brothers, unmarried children, and married sons with their families (a woman customarily joined the beth ab of her husband). The patriarch controlled all family resources, using them to protect and care for each family member.

In this setting, the beth ab was the context through which each member was connected to the rest of society. If a member lost connection to the family due to oppression, capture by enemies, poverty, or bad choices, the patriarch was responsible to restore the “marginalized” member to the family. Anyone who found himself or herself without a beth ab was in serious trouble. Widows and orphans were particularly vulnerable because they had no means of support or protection outside the beth ab.

The mission that the God of the universe entrusts to His people — to display His character by demonstrating compassion for those in need — began in ancient times in the Negev desert with Abraham and Sarah. It continued throughout biblical history with significant moments in which God’s people acted similarly and brought lost children back into the “Father’s house.” We have been given a truly amazing privilege and responsibility to share through our actions and words the message of redemption that God offers to everyone in our broken world.

I want to share with you an image that conveys a sense of the opportunity we have. It occurred during the filming of this session. In the tent of a Bedouin family, the family patriarch offered us fresh camel’s milk. One could sense from his wife and eight children the honor we were being given. Neither our host nor his family drank but simply sat and watched in silence as they honored us with this symbol of great hospitality. We were of a different culture, race, nationality, and religion. They honored us anyway. It is hard to describe the overwhelming sense of appreciation we felt. It was as if God gave us a lesson in how we are to present ourselves and hence our God to those among us (or strangers who enter our lives) who are in need.

Then pray, thanking God for the blessing of His beth ab, praising Him for the miracle of His redemption that restores even the most broken, lost, and hopeless children to His faithful care. Thank God for the privilege of being a blessing to His lost children. Ask Him to give you a willing heart, generous spirit, compassionate wisdom, and mighty strength as you seek to display to a watching world the God who redeems.

Come join the conversation on our blog and share your answers to the questions above! We want to hear from you!