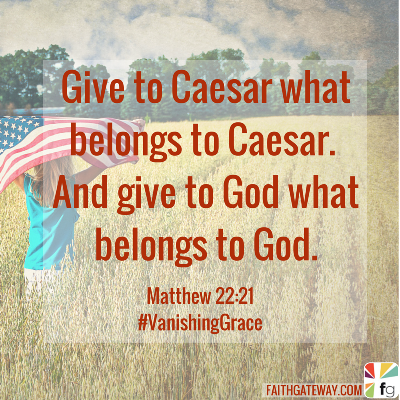 The media often use “right-wing” as an adjective inseparably connected with evangelicals.

James Davison Hunter says, “It is possible to argue that at the same time the Christian Right acquired and exercised its greatest power — culminating in the 2004 presidential election — this movement also generated greater hostility toward the Christian faith than ever before in the nation’s history.” Hunter adds that evangelicals on the left follow a parallel course of political involvement, looking to government to enact the policies they hold dear.

How should Christians engage in a democracy that includes a diversity of beliefs and that grows increasingly post-Christian? And how do we live out convictions in a way that still conveys grace?

Jesus himself showed little concern for secular politics, calling Herod “that fox,” stonewalling Pontius Pilate with his lack of self defense, and leaving us with the enigmatic rule, “Give back to Caesar what is Caesar’s and to God what is God’s.” The apostle Paul, in contrast, used the full privilege of Roman citizenship.

He confronted culture with the new message of Jesus while simultaneously showing respect for political authority.

He testified before imperial officials and at times relied on the Roman military to protect him from his religious enemies. When arrested, he appealed his case up the ladder of the Roman justice system, where he got a final hearing with a tragic end.

In short, the New Testament presents government as necessary, even ordained by God, but certainly no sponsor or friend to faith. Jesus, Paul, and most of the twelve disciples died as martyrs, after all, and the early Christians faced periodic waves of persecution from Roman emperors.

Two centuries later Christians viewed with thanksgiving and relief the conversion of the emperor Constantine, who granted Christianity protected status. Soon it became the official state religion. Over the next millennium in Europe, church and state interplayed like dancing partners, sometimes locked in tight embrace and sometimes flinging each other across the ballroom floor. The global spread of Christianity introduced new church/state variations in places like Africa and the Americas.

During the Eisenhower era of the 1950s, about the time “In God We Trust” was added to U.S. coins, theologian H. Richard Niebuhr published a book that became a classic. Christ and Culture describes five different approaches to how religion and government, or church and state, might relate to each other. Niebuhr called one approach “Christ above culture,” referring to times when the church wielded the real power. Europe’s Holy Roman Empire perfected this model: royalty kneeled before the pope, not vice versa. At the other end of the spectrum, Anabaptists and other splinter groups separated themselves from the surrounding culture; “Christ against culture,” Niebuhr labeled their approach. The dissenters’ refusal to take oaths, to doff their caps to authorities, and to serve in the army and on juries infuriated their governments, and as a result European countries cruelly persecuted them. North America served as a haven for many of these groups, including Quakers, Amish, Mennonites, and Hutterites.

John Calvin’s model, adopted by Puritans in America, calls for Christ to transform culture, bringing society in line with Christian values as far as possible. Around the same time, Lutherans developed a doctrine of Christ in paradox with culture. On earth we are subject to two kingdoms, said Martin Luther: the kingdom of God and the kingdom of the world. (Of course, sometimes the government may ask Christians to do what goes against their convictions, bringing the two kingdoms into conflict: in Luther’s homeland many of Hitler’s soldiers used the excuse, “We were obeying the secular kingdom.”)

Finally, a fifth group identifies Christ with culture. This approach may take many forms, such as the ethnic groups (like Orthodox Serbs and Catholic Croats) who blend religion and culture. Niebuhr used the Social Gospel movement as an American example: as they work to reform society, these folks tend to absorb the culture around them, and in time the distinctives of their faith may disappear.

Reading Niebuhr’s book in my college days left me feeling enlightened but as confused as ever. All five approaches seemed to have something to contribute, and in fact I could point to biblical examples of each one, especially in the Old Testament.

Kings such as David and Solomon virtually combined church and state. Prophets often denounced the surrounding culture — yet even as the prophet Elijah was violently opposing Ahab’s regime, a “devout believer in the Lord” named Obadiah ran Ahab’s palace while sheltering God’s true prophets on the side. Amos and Hosea thundered against the state; Isaiah acted as a kind of court prophet. Daniel held high office in two different pagan governments and Nehemiah led a detachment of Persian cavalry.

Theologian John Howard Yoder pointed out that Christians will never wholeheartedly embrace or reject culture, but rather we must discriminate among its various parts. We will categorically reject some elements (pornography, tyranny, human trafficking), accept others within limits (commerce, transportation, taxes), and provide a new motivation to others (family life, education, peacemaking). We will use some aspects of culture (music, art, language), albeit in our own way, and we will heartily promote certain activities (hospices, care for orphans, homeless shelters, soup kitchens).

Is there one best way for Christians to relate to politics and culture, especially in a democracy where we have a rightful voice?

Should we withdraw into a counterculture and devote our energies to the kingdom of God, or should we actively work to transform society? And if we choose the second path, can we do so in a way that does not drown out our core message of love and grace? As Lesslie Newbigin posed the question, “Can one who goes the way of the Cross sit in the seat of Pilate when it falls vacant?”

With all the God-talk in politics today, younger voters may be surprised to learn that evangelicals’ love affair with politics is a recent phenomenon. During my childhood, conservative churches did little “meddling” in politics, emphasizing instead personal behavior and preparation for the next life. In Niebuhr’s term we were mostly Christ-against-culture, and only in the 1980s did anyone start talking about a Moral Majority. In the next decades a clear pattern emerged, as many polls attest: the more vocal Christians became in the political arena, the more negatively they were viewed. Not long ago a huge majority of the uncommitted still viewed Christians favorably. Now, as I have mentioned, a diminishing minority of young “outsiders” have a favorable impression of Christianity and only 3 percent have a good impression of evangelicals.

Have Christians obscured the good news by their efforts to restore morality to the broader culture?

The state has one overriding concern, that of controlling bad behavior: how to keep citizens from killing each other, breaking into houses, cheating customers at the market, and yielding to a sexual license that would undermine families. The modern world faces a dilemma. On important issues, society badly needs moral guidance. Religion seems an obvious resource, yet one rejected by much of secular society. Already the media treat opinion polls as the primary arbiter of such matters as sexual behavior, abortion, the death penalty, and assisted suicide. In nations with a religious consensus, church and state can work hand in hand to encourage moral values they both agree on. For example, in more religious times the British king issued a proclamation for the “Encouragement of Piety and Virtue, and for the Preventing and Punishing of Vice, Profaneness, and Immorality.”

The world has changed, however. Diverse societies now contain many different religions — Yugoslavia ruptured into seven countries over its inability to deal with this very predicament.

Fair enough, but if Christians comprise a majority, as they do in the U.S., shouldn’t they have a strong influence in determining those ideals and values?

Have Christians obscured the good news by their efforts to restore morality to the broader culture? Is there one best way for Christians to relate to politics and culture, especially in a democracy where we have a rightful voice? Join the conversation today on our blog.