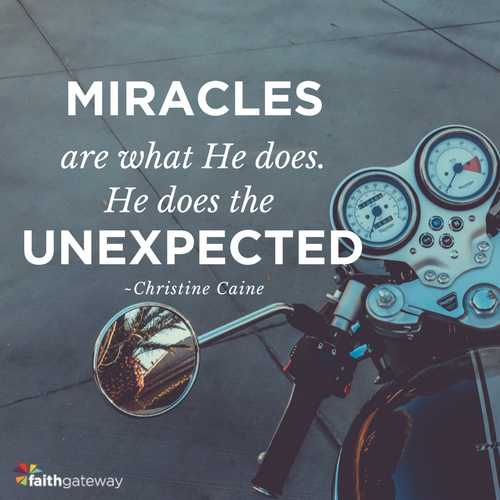 Unexpected Is What God Does

There’s a conversation in the Bible I would have loved to have overheard firsthand. It’s among the three women who were on their way to the tomb of Jesus to anoint His body with spices and perfume. Because He had died on a Friday, and the Jewish Sabbath was the next day, His body hadn’t been anointed and prepared for burial like it would have normally have been. Joseph of Arimathea, a highly respected member of the Jewish council who lived expectantly on the lookout for the kingdom of God, had worked up his courage, gone to Pilate, and asked for Jesus’ body (Mark 15:42-45). Pilate agreed, so Joseph wrapped Jesus’ body in linen and placed Him in a cave-like tomb cut out of a rock — unprepared for burial. Then, he had a massive stone rolled against the entrance to the tomb.

The stone probably weighed at least two thousand pounds, and it would have been rolled down an incline to seal the tomb most likely by as many as twenty men. This was customary at the time to prevent grave robbers from stealing the body or other objects inside the tomb. And because Jesus was such a figure of notoriety at the time, there were also armed guards stationed in front of His tomb as another measure of protection.

So, on Sunday morning, just after sunrise, the three women — Mary Magdalene, Mary the mother of James, and Salome — were on their way with spices to perfume Jesus’ body.

Imagine how sobering their walk must have been. Imagine how despondent they must have felt. Their spirits had been crushed. The one who had given them purpose, value, dignity, the one whom they had loved was now dead. Jesus had been their teacher, their Lord. They thought He was going to be the Messiah, and now He was gone. And even though He had been dead for close to two days, long enough to have a stench, they still wanted to anoint Him for burial.

They loved Him, so they went, and their surprising conversation began…

Very early on the first day of the week, just after sunrise, they were on their way to the tomb and they asked each other, “Who will roll the stone away from the entrance of the tomb?” — Mark 16:2-3

Now, I don’t mean to make light of their conversation or sense of loss, but it strikes me as out of place that of all the details they’d remembered, they started musing about the biggest obstacle on the way to the tomb. Surely they had thought out their plans ahead of time…

Set our alarms before sunrise.

Gather all the spices.

But they forgot one BIG practical detail. The one that separated them from the Lord they loved. Who will remove that stone? A two-thousand-pound stone that normally took twenty people to move — downhill into position. Why didn’t we invite any men along? Like more than twenty of them?

Impossible. Immoveable. Too large. Too heavy. Too out of their control. A solid object standing between them and Jesus that they couldn’t move with their own strength.

Sound familiar? How many of us have come to this same realization, that there is an immoveable object between us and Jesus, and there is no way for us to remove it in our own strength? When dreams haven’t been realized. When bills can’t be paid. When marriages won’t work. When children seem out of control. When habits can’t be broken. When grades can’t be made. When people can’t be pleased. When emotions can’t be contained. When fears won’t subside.

We all have known those kinds of stones, and they can feel just as heavy as the one that sealed Jesus’ tomb.

We all know what it is to face seemingly insurmountable obstacles in our lives — huge immovable objects that block our future. Things that seem like no-one can ever remove them from our lives. Things we expect to live with forever. Stones that seem to seal the death of our dreams, hopes and desires.

Like these women, we wonder, Who will roll away the stone from the entrance of the tomb?

I love the continuation of the women’s story…

But when they looked up, they saw that the stone, which was very large, had been rolled away. — Mark 16:4

I lift up my eyes to the mountains. Where does my help come from? My help comes from the Lord, the maker of heaven and earth. — Psalm 121:1-2

As they entered the tomb, they saw a young man dressed in a white robe sitting on the right side, and they were alarmed. “Don’t be alarmed,” he said. “You are looking for Jesus the Nazarene, who was crucified. He has risen! He is not here. See the place where they laid Him. But go, tell His disciples and Peter, ‘He is going ahead of you into Galilee. There you will see him, just as He told you.’ — Mark 16:5-7

Jesus removes the stones that block our access to Him. He does what we can never do. Why? Because impossible is where He starts.

Miracles are what He does. He does the unexpected.

Watch the trailer for Unexpected

What is going on in your life right now that needs a shockingly miraculous unexpected response from Jesus? What is impossible? Immovable? Come share with us on our blog. We want to hear from you! ~ Devotionals Daily