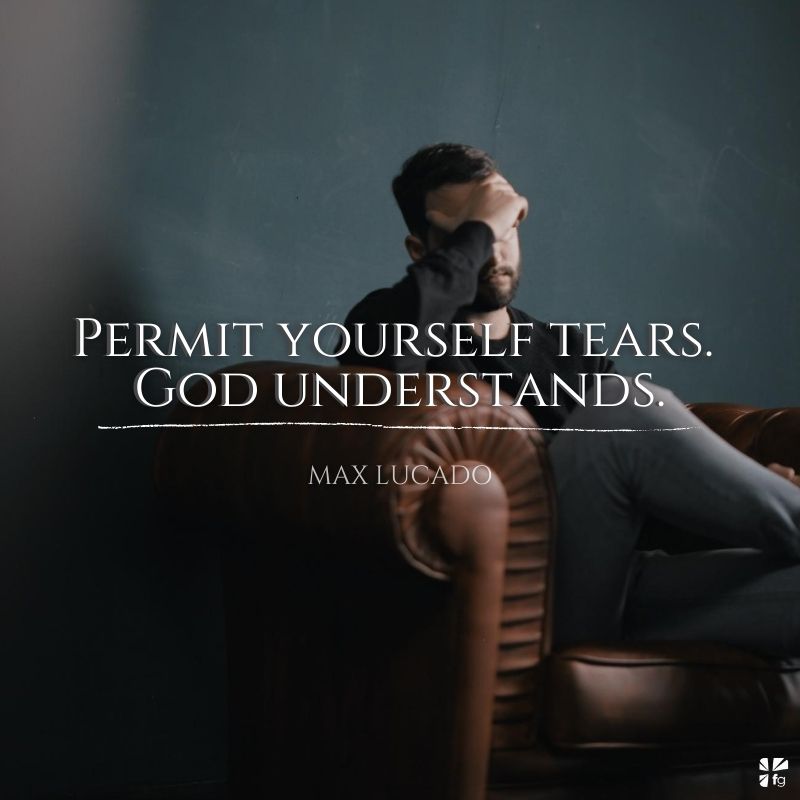 You might hear the news from a policeman: “I’m sorry. He didn’t survive the accident.”

You might return a friend’s call, only to be told, “The surgeon brought bad news.”

Too many spouses have heard these words from grim-faced soldiers: “We regret to inform you…”

In such moments, spring becomes winter, blue turns to gray, birds go silent, and the chill of sorrow settles in. It’s cold in the valley of the shadow of death.

David’s messenger isn’t a policeman, friend, or soldier. He is a breathless Amalekite with torn clothing and hair full of dirt who stumbles into Camp Ziklag with the news:

The people have fled from the battle, many of the people are fallen and dead, and Saul and Jonathan his son are dead also. — 2 Samuel 1:4

Jonathan. Closer than a brother. He had saved David’s life and sworn to protect his children.

We’ve felt his heavy hand on our shoulders. Not in Ziklag, but in emergency rooms, in children’s hospitals, at car wrecks, and on battlefields.

And we, like David, have two choices: flee or face the giant.

Many opt to flee grief. Captain Woodrow Call urged young Newt to do so. In the movie Lonesome Dove, Call and Newt are part of an 1880s Texas-to-Montana cattle drive. When a swimming swarm of water moccasins end the life of Newt’s best friend, Call offers bereavement counsel, western style. At the burial, in the shade of elms and the presence of cowboys, he advises, “Walk away from it, son. That’s the only way to handle death. Walk away from it.”

What else can you do? The grave stirs such unspeakable hurt and unanswerable questions, we’re tempted to turn and walk. Change the subject, avoid the issue. Work hard. Drink harder. Stay busy. Stay distant. Head north to Montana and don’t look back.

Yet we pay a high price when we do. Bereavement comes from the word reave. Look up reave in the dictionary, and you’ll read “to take away by force, plunder, rob.” Death robs you. The grave plunders moments and memories not yet shared: birthdays, vacations, lazy walks, talks over tea. You are bereaved because you’ve been robbed.

Normal is no more and never will be again. After the wife of C. S. Lewis died of cancer, he wrote, “Her absence is like the sky, spread over everything.”1

Just when you think the beast of grief is gone, you hear a song she loved or smell the cologne he wore or pass a restaurant where the two of you used to eat. The giant keeps showing up.

And the giant of grief keeps stirring up. Stirring up… Anxiety. “Am I next?”

Guilt. “Why did I tell him…” “Why didn’t I say to her…” Wistfulness. You see intact couples and long for your mate.

You see parents with kids and yearn for your child.

The giant stirs up insomnia, loss of appetite, forgetfulness, thoughts of suicide. Grief is not a mental illness, but it sure feels like one sometimes.

Upon hearing of the deaths of Saul and Jonathan,

The warrior wept. The commander buried a bearded face in callous hands and cried. He

[He] ripped his clothes to ribbons. All the men with him did the same. They wept and fasted the rest of the day, grieving the death of Saul and his son Jonathan, and also the army of God and the nation Israel, victims in a failed battle. — 2 Samuel 1:11-12 MSG

Wailing warriors covered the hills, a herd of men walking, moaning, weeping, and mourning. They tore clothing, pounded the ground, and exhaled hurt.

You need to do the same. Flush the hurt out of your heart, and when the hurt returns, flush it again. Go ahead, cry a Mississippi. Jesus did. Next to the tomb of his dear friend,

Why would He do such a thing? Does He not know of Lazarus’s impending resurrection? He’s one declaration from seeing His friend exit the grave. He’ll see Lazarus before dinner.

Amid the answers we think we know and the many we don’t is this one: death stinks.

Death amputates a limb of your life.

So Jesus wept. And in His tears we find permission to shed our own. F. B. Meyer wrote:

Jesus wept. Peter wept. The Ephesian converts wept on the neck of the Apostle whose face they were never to see again. Christ stands by each mourner, saying, “Weep, My child; weep, for I have wept.”

Tears relieve the burning brain, as a shower in the electric clouds. Tears discharge the insupportable agony of the heart, as an overflow lessens the pressure of the flood against the dam.

Tears are the material out of which Heaven weaves its brightest rainbow.2

We don’t know how long Jesus wept. We don’t know how long David wept. But we know how long we weep, and the time seems so truncated. Egyptians dress in black for six months. Some Muslims wear mourning clothes for a year. Orthodox Jews offer prayers for a deceased parent every day for eleven months. Just fifty years ago rural Americans wore black armbands for a period of several weeks.3 And today? Am I the only one who senses that we hurry our hurts?

Grief takes time. Give yourself some.

Sages invest themselves in hurt and grieving. — Ecclesiastes 7:4 MSG

Lament may be a foreign verb in our world but not in Scripture’s. Seventy percent of the psalms are poems of sorrow. Why, the Old Testament includes a book of lamentations. The son of David wrote,

Sorrow is better than laughter, for sadness has a refining influence on us. — Ecclesiastes 7:3 NLT

We spelunk life’s deepest issues in the cave of sorrow. Why am I here? Where am I headed?

I am worn out from sobbing. Every night tears drench my bed; my pillow is wet from weeping. — Psalm 6:6 NLT

I am dying from grief; my years are shortened by sadness. Misery has drained my strength; I am wasting away from within. — Psalm 31:10 NLT

Are you angry with God? Tell Him. Disgusted with God? Let Him know. Weary of telling people you feel fine when you don’t? Tell the truth. My friends Thomas and Andrea Davidson did. A stray bullet snatched their fourteen-year-old son, Tyler, out of their lives. Tom writes:

We were bombarded by the question, “How are you doing?”… What I really wanted to tell everyone was, “How do you think we are doing? Our son is dead, our life is miserable, and I wish the world would end.”4

David might have used different language. Then again, maybe not. One thing for sure, he refused to ignore his grief.

David wept as creatively as he worshiped, and — underline this —

David sang this lament over Saul and his son Jonathan, and gave orders that everyone in Judah learn it by heart. — 2 Samuel 1:17-18 MSG

David called the nation to mourning. He rendered weeping a public policy. He refused to gloss over or soft-pedal death. He faced it, fought it, challenged it. But he didn’t deny it. As his son Solomon explained,

God has the last word on death. And, if you listen, He will tell you the truth about your loved ones. They’ve been dismissed from the hospital called Earth. You and I still roam the halls, smell the medicines, and eat green beans and Jell-O off plastic trays. They, meanwhile, enjoy picnics, inhale springtime, and run through knee-high flowers. You miss them like crazy, but can you deny the truth? They have no pain, doubt, or struggle. They really are happier in Heaven.

And won’t you see them soon? Life blisters by at mach speed.

You have made my days a mere handbreadth; the span of my years is as nothing before you. Each man’s life is but a breath. — Psalm 39:5 NIV

When you say, “I’ll see you soon,” you mean it. When you stand in the cemetery and stare down at the soft, freshly turned earth and promise, I’ll see you soon, you speak truth. Reunion is a splinter of an eternal moment away.

So go ahead, face your grief. Give yourself time. Permit yourself tears. God understands.

He knows the sorrow of a grave. He buried his son. But he also knows the joy of resurrection. And, by His power, you will too.

Excerpted with permission from Facing Your Giants by Max Lucado, copyright Max Lucado.