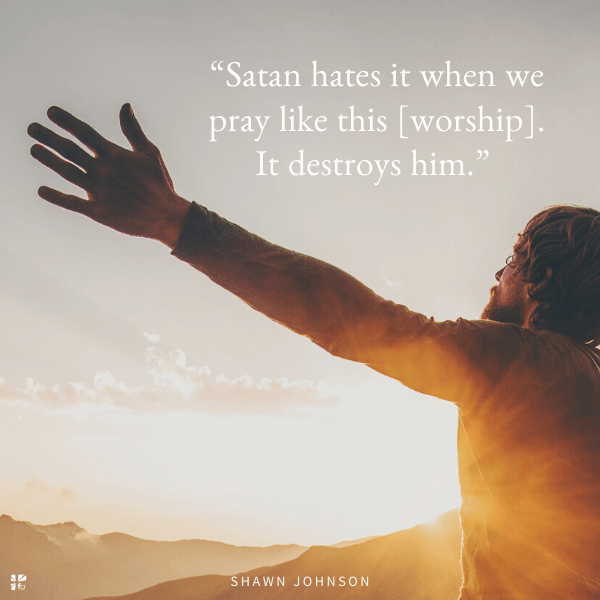 Have seven priests carry trumpets of rams’ horns in front of the ark. On the seventh day, march around the city seven times, with the priests blowing the trumpets. — Joshua 6:4

“The rules are simple,” Pastor Chris told my wife and me.

“Take this Bluetooth speaker into that room, blast some worship music, and start worshiping and praying out loud together.”

Jill loved those instructions. I hated them.

I’m a pastor, so you wouldn’t think that would be a difficult task for me, but I can’t stand praying with my wife. She’s an incredible prayer warrior, and I feel like a stuttering idiot. Even after all these years of marriage, this far into my relationship with God, it still feels awkward for me to pray with her at length.

I hope that is freeing for some of you. Stop feeling guilty. It’s not just you!

“That’s right,” he continued, “it’s time to start worshiping. You’re both going to pray out loud for thirty straight minutes at the volume of the music.”

When Pastor Chris saw the deer-in-the-headlights look I gave him, he explained the method to his madness. He reminded us we were in a battle, and the first two weapons we needed to use were prayer and worship.

The whole thing was a little confusing. Prayer doesn’t fix my anxiety; at times it gives me even more of it. And worship is something we do in church services that, truthfully, makes me feel insecure and often makes my feet hurt when they have us standing for so long.

I thought, I’m here fighting for my life. We are going to war. And our weapons of choice are prayer and worship?

But then he said something that changed the trajectory of my life:

“Satan hates it when we pray like this. It destroys him.”

That’s what I needed to hear. His words instantly brought me back to something that had happened less than a year prior, an experience that changed my family’s lives forever. An event where I felt like God was telling me to stop seeing worship as singing songs in church and begin viewing it as a weapon to battle for my freedom.

THE WALLS OF JERICHO

The very first battle is somewhat famous. Even if you haven’t been in church much, you may have heard of the Battle of Jericho. It’s this crazy story where God instructed the nation of Israel to march around Jericho for seven straight days. And on the last day, God told them to start worshiping, singing, yelling, praising God, and playing instruments.

The interesting thing is, the trumpets God instructed them to play were sometimes used as a battle cry before the battle but were most often used to celebrate after a victory. The Israelites would always fire up the worship music after they won a battle. But in this case, God told them to start worshiping, singing, yelling, and playing those instruments before they saw the victory.

Celebrate before they had anything to celebrate? Worship before they saw the outcome they wanted? That doesn’t make any sense, and yet that’s exactly what God called them to do.

And the results were mind-blowing. You can read all about it in Joshua 6. Essentially, as soon as they started worshiping, Jericho’s walls, which were securely barred, miraculously fell, and the Israelites were able to overcome the city.

The Israelites didn’t have a chance on their own strength. However, right in the middle of their confusion, fear, anxiety, depression, and (I have to believe) feelings of hopelessness, God showed up in a spectacular way. They experienced freedom and a victory they never dreamed possible. And the whole thing was put in motion with a weapon called worship.