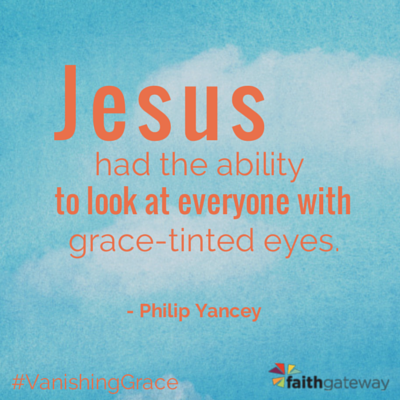 Jesus spoke several times concerning how people would feel about Christians because of our relationship with Him.

Blessed are you when people hate you, when they exclude you and insult you and reject your name as evil, because of the Son of Man. – Luke 6:22

The questions we must ask ourselves are, “Are we being despised because of Jesus, or are we being hated because of the ways we are representing Jesus. Do we truly represent Jesus by the way we live, or are we just getting in His way?” Philip Yancey explores how we are perceived by the world in the new video Bible study Vanishing Grace. We hope you are blessed by this week’s excerpt. ~ Fred Bittner, FaithGateway, Bible Studies

Most people I meet assume that Christian means very conservative, entrenched in their thinking, anti-gay, anti-choice, angry, violent, illogical, empire builders; they want to convert everyone, and they generally cannot live peacefully with anyone who doesn’t believe what they believe. —Unnamed Critic

As much as Christians may want others to know the good news of forgiveness and experience the hope of a redeemed life, the good news isn’t sounding so good to many people these days. In fact, to some “outsiders” the very word Christian arouses feelings of fear, distrust, antagonism, and hostility. It is a challenge to be salt and light to people who view Christians so negatively.

Watch the video segment for Session 1, using the following outline to take notes on anything that stands out to you.

Jesus had the uncanny ability to look at everyone with grace-tinted eyes, seeing not only the beauty of who they were but also the sacred potential of what they could become. We His followers have the same challenge: “So from now on we regard no one from a worldly point of view,” Paul told the Corinthians. Evidently we are not doing likewise since many people think of faith, especially evangelical faith, as bad news. They believe Christians view them through eyes of judgment, not eyes of grace. Somehow we need to reclaim the “goodnewsness” of the gospel. — Vanishing Grace, page 70

1. How do you respond to the research on the number of “nones” and their increasingly unfavorable impression of Christians? To what degree have you found these trends to be true in your own interaction with people, particularly among the young?

2. What do you think may be the reasons some people perceive the good news of the gospel as bad news?

3. If you asked the question “What’s the first thing that comes to your mind when I say the word Christian?” what kind of responses might you expect to receive from your acquaintances — coworkers, neighbors, people you meet at a party?

4. What insights into the minds and hearts of people who are not Christians did you discover from Gabe Lyons’s observations?

Jesus: Our Model of Grace

The issue is not whether I agree with someone but rather how I treat someone with whom I profoundly disagree. We Christians are called to use the “weapons of grace,” which means treating even our opponents with love and respect. As usual, Jesus shows the way. — Vanishing Grace, page 26

During Jesus’ day, Samaritans and Jews had much in common, but they didn’t get along. Because of their differences, the two groups became isolated and nursed grudges. The Jews even considered the Samaritans to be heretics.

Jesus, in contrast, dispensed grace everywhere He went. He sought out people who were considered to be “lost.” He told parables that emphasized the value of what had gone missing — a lost coin, a wandering lamb, a wayward son. He earnestly desired that all people have the opportunity to hear the gospel — good news about God’s love for us, God’s forgiveness offered to us, and God’s invitation to join His family.

Jesus showed us how to use the “weapons of grace” and treat even our opponents with love and respect. His interaction with the Samaritan woman at the well (John 4:1-42) demonstrates what it looks like to see others through eyes of grace.

5. The Gospels give us a hint of the intense animosity between Jews and Samaritans during Jesus’ day:

6. In stark contrast to the prevailing attitudes of religious Jews and Samaritans, consider how Jesus portrayed members of both groups by reading Luke 10:30-35.

7. John 4:1–42 lets us in on a close­up encounter between Jesus and a Samaritan woman who was keenly aware of the flash­ points between Jews and Samaritans. As you skim this passage, (1) identify the opposing perspectives revealed, (2) consider how the grace-­filled eyes of Jesus saw beyond the conflict, and (3) in each instance notice how Jesus presented the truth of the good news to address the longings of her heart.

8. What did you learn from Jesus’ encounter with the Samaritan woman about conveying what Paul calls the “incomparable riches” of God’s grace in Ephesians 2:7?

“Make every effort to live in peace with all men and to be holy; without holiness no one will see the Lord. See to it that no one misses the grace of God.” – Hebrews 12:14-15

During His conversation with the Samaritan woman, Jesus had ample opportunity to fuel animosity and create deep wounds — not just between Himself and the woman, but between Himself and her village, between the people of her village and all Jews. It would have been so easy to put up barriers that cause division. Yet Jesus chose to take down those barriers, to dispense God’s grace, to pour out His living water to anyone who was thirsty.

9. Animosity similar to that between the ancient Jews and Samaritans exists between Christians and others today .

10. Jesus has granted us, as His followers, the immense privilege of dispensing God’s grace to a thirsty world — including the groups identified in question

11. But when we ignore basic principles of relationship by making condescending judgments, proclamations that aren’t backed by compassionate action, or speaking without first listening, we fail to love — we fail to communicate grace and thus deter a thirsty world from finding the source of living water.

12. Consider ways that Christians have created deep wounds and hostility — perhaps in the name of God. What have you learned from such negative experiences that may help us to better reach out to those who have been wounded by our failure to dispense God’s grace in our world?

Come share your responses to these questions and leave your comments on our blog! We would love to hear from you!