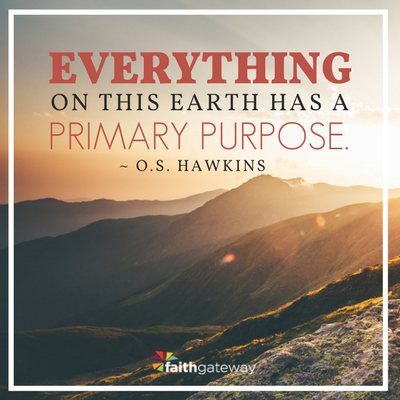 VIPs, those who influence others in life, are people of vision: they know where they are headed and how they plan to arrive at their destinations. VIPs are also people of integrity: they are guided by an inner commitment to integrity that enables them to practice on the outside what they profess to be on the inside. Finally, if we are going to influence those in our assigned sphere, we must be people who are moved and motivated by a focused purpose in life. Each of us has a job to do that we can do like no one else can. It is exciting to live according to the divine plan and the determined purpose of your life.

No one ever had the kind of impact or lasting influence upon generations through the centuries as Jesus of Nazareth. He was a person of vision, He was a person of integrity, and He lived focused on His God-given inner purpose. Consider a conversation He had with His disciples. Once, in the gospels, Jesus was determined to detour from the normal Jewish route while traveling between Galilee and Judea — He felt led to make the journey straight through the region of Samaria. But this was a route a first-century Jew in his right mind did not want to take. It is difficult, if not impossible, to describe the boiling racial and ethnic hatred that permeated the mood of personal animosity and distrust between a first-century Jew and a Samaritan. At one point on their journey, the disciples went into a town to buy food while Jesus waited for them outside the village of Sychar. When the disciples returned, Jesus responded by saying, “My food” — the thing that sustains Me and keeps Me going; My purpose in life — “is to do the will of Him who sent Me, and to finish His work” (John 4:34). Jesus lived with a driving purpose in life as He walked the ways of this world encased in human flesh. It was this purpose-driven life that led Him to the place to which He was ultimately sent — the cross of Calvary.

Jesus knew His purpose for being on this earth.

What is your primary purpose in life?

VIPs — besides being people of vision and integrity — are people with a passion to fulfill their purpose in life.

Sometimes that purpose is reflected on tombstones. I have always found it fascinating to see the epitaphs etched in stone on the graves of those who have gone before us. Those words have a way of telling something about the deceased’s personality. Winston Churchill, for instance, was a great world leader with an often caustic nature. You may have heard about the friction between him and Lady Astor, the American-born debutante who married into Britain’s upper class. To Churchill’s disdain, she became the first female member of the British Parliament. On one occasion when she was annoyed with Churchill, Lady Astor exclaimed, “Sir, if you were my husband, I would give you poison in your tea.” Churchill fired right back, saying, “If I were your husband, I would drink it!” His wit extended to his epitaph. When he died in 1965, his final request was that his own tombstone read, “I am ready to meet my Maker. Whether my Maker is prepared for the great ordeal of meeting me is another matter.”

Consider a few other revealing examples. As a young man Benjamin Franklin wrote in his diary what he wanted on his tombstone: “The Body of B. Franklin, Printer; like the Cover of an old Book, Its Contents torn out, And stripped of its Lettering and Gilding, Lies here, Food for Worms. But the Work shall not be wholly lost; for it will, as he believed, appear once more, in a new & more perfect Edition, Corrected and amended By the Author.” And then there is the epitaph of Mel Blanc, the legendary voice of dozens of Warner Bros. cartoon characters. He chose for his epitaph a signature line he often quoted when voicing Porky Pig: “That’s all, folks!”

But no better epitaph could ever be etched in stone than the one the apostle Paul gave to King David:

When David had served God’s purpose in his own generation, he fell asleep. — Acts 13:36 NIV

Anyone who has studied the life of King David has seen that he was indeed moved and motivated and, as a result, focused on a single purpose. Therefore no better words could describe his well-lived life than these: “David served God’s purpose in his own generation.” Could any better words be written on your own tombstone than these? “You served God’s purpose in the sphere of influence He assigned to you.”

What do you want to be written on your tombstone? Each of us was created by God with a job to do that we can do like no one else can. What’s your purpose? Come share with us on our blog. We want to hear from you! ~ Devotionals Daily