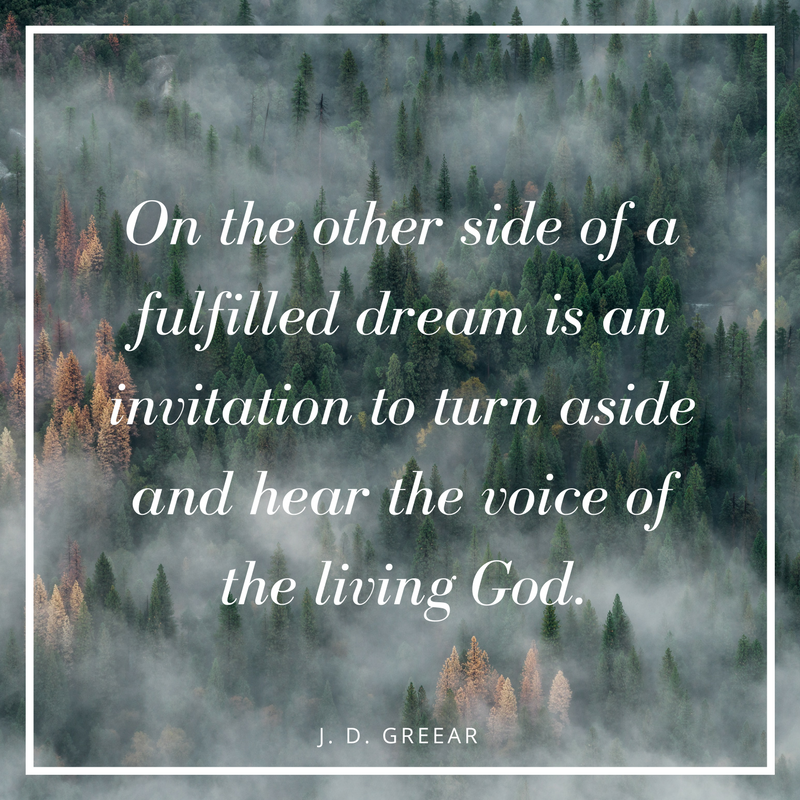 We don’t know much about Moses’s faith during the years he grew up in Pharaoh’s house or during the forty years he wandered in the wilderness after his first disastrous attempt to deliver Israel. We don’t know if Moses was even interested in God on the day that God spoke to him. We do know that Moses was a discouraged and defeated fugitive, probably in his sixties, leading a flock of his father-in-law’s sheep in the desert — which sounds to me like the ultimate life-fail. Most likely, his primary concern that day, as it was every day, was finding grass and water for his flock. But when he saw a flaming bush that wasn’t being reduced to ashes, he turned aside to see what was going on:

When the Lord saw that he turned aside to see, God called to him from out of the bush, ‘Moses! Moses!’ And he said, ‘Here I am.’ — Exodus 3:4 ESV, emphasis mine

Notice that when Moses turned aside, the voice did not explain how the fire was burning in the bush. Nor did God explain where he had been for four hundred years, a question Moses and every living Israelite wanted the answer to. The voice simply called out to Moses, “I am here, and I have something to say to you.”

After four hundred years, with no explanation, the silence was broken. The God who spoke the heavens into existence began to converse with Moses:

I’ve been watching you, Moses. I haven’t forgotten you, and I’ve seen your anguish and heard your cries. — Exodus 3:7, my paraphrase

In the same way, most people who find God don’t do so because they discern His existence as the logical conclusion of a disciplined philosophical enquiry. Most find God in a moment where they were confronted with the simple fact that God is. They are going through life unsuspectingly when suddenly — boom — God interrupts.

For many outside the church, God often does this like He did Moses, through unresolved mysteries — burning bushes. He confronts us with things we can’t explain, things that invite us to look beyond the day-to-day tasks.

For some of us, it is the simple question of where we all came from. In his late seventies, Antony Flew, one of the twentieth century’s most famous philosophers, stunned the philosophical world by announcing that he had begun to believe in God. If you are not into philosophy, you may not realize what a big deal this was. It would be like Rush Limbaugh suddenly declaring that he is a Democrat. Flew said he just didn’t see any other compelling explanation for the complexities of design in creation. For years he had tried to make peace with it, but it just couldn’t be that nothing times nobody equaled everything. It couldn’t be that the wonderful, beautiful complexity and intelligence of life emerged from a dead chaos. There had to be, as scientist Thomas Edison had previously concluded, “a captain on the bridge.”

For others, the bleakness of death prompts them to consider the possibility of something beyond the grave. Shortly before he died, Steve Jobs, the founding CEO of Apple, told an interviewer that he sometimes believed in God and sometimes didn’t. But after he was diagnosed with cancer, he found himself wanting to believe. It can’t be that when we die it all just fades to black. All the wisdom we’ve accumulated as a human race, all our accomplishments, somehow must live on. In fact, he explained, that’s why he never liked to put on/off switches on Apple devices. He didn’t like the idea of being able just to flip a switch and turn something off.1

In the same way, the experience of love and beauty are invitations to turn aside and listen. C. S. Lewis said that through beauty he experienced a yearning that compelled him to earnestly search for its source, as if he were feeling a ray of sunshine warm his face, knowing there must be some sun from which it emanates. He concluded,

I find that much more compelling than the ways people like atheist Richard Dawkins account for beauty: when you look at a certain scenery, you think it’s beautiful because your ancestors believed that there was food out there, and that particular neurological feature helped them survive and has now come down to you.3

Really? Do you find the stars and sunsets beautiful because subconsciously they remind you of Twinkies? Is your love toward your spouse, kids, or parents merely a conditioned response that enables you to propagate your DNA into society faster than your neighbors? Try putting that on a Valentine’s Day card: “On this very special day, my genes are releasing chemical compounds into my bloodstream because they have been cultivated through centuries of evolution to see you as particularly useful for the propagation of my DNA into the next generation.” If you truly believe that, I’m impressed with your intellectual consistency. But I’d advise you to downplay that perspective on Valentine’s Day.

Perhaps pain or disappointment has driven you to look upward for answers. A professional athlete once confided to me that tragedy in his life was forcing him to consider things he’d never considered before. He graduated college as an all-American, was drafted in the first round by one of the premier teams in the nation, and awarded a contract for millions of dollars. One afternoon, he joined up with some buddies for some careless fun and ended up on his back with multiple broken bones. The circumstances of his accident nullified his contract. In the space of a few seconds, everything he’d lived for was gone. With tears in his eyes, he said, “I can’t believe I threw it all away for a few seconds of carelessness! Why would God let this happen? Is He punishing me?”

I don’t think so. I think, in fact, God was rescuing him. God was trying to get him to see that he was throwing away eternity for a few seconds of fame in an athletic arena. Perhaps he needed to lose what he thought was valuable so he could gain what is truly valuable. Perhaps God put him flat on his back so he would finally look in the right direction, so that he would lean in to hear the voice calling from the burning bush. C. S. Lewis called pain God’s “megaphone to rouse a deaf world.” He said, “God whispers to us in our pleasures, speaks in our conscience, but shouts in our pains.”4

The emptiness a person sometimes feels on the other side of achieving a lifelong goal can serve as a burning bush. Years ago, I heard a successful CEO say he spent his whole life climbing the ladder of success only to find upon getting to the top that the ladder was leaning against the wrong building! He’s not alone. Many people find that the thing they worked so hard to obtain just didn’t deliver what it had promised. In the words of Bono, many people still haven’t found what they’re looking for.

The disillusionment on the other side of a fulfilled dream is an invitation to turn aside and hear the voice of the living God.

Reading the Bible may be your burning bush. It was for me. During all the years I silently struggled with my faith, I continued to pore over the Bible. The more I read and pondered, the more I became convinced that the Jesus of the Gospels was real. I didn’t understand Him. Why He did what He did, or didn’t do what He didn’t do, confused me. But it seemed clear that the God of the Bible was a living, moving being, and that He was calling out — to me. Many who have read the Bible can’t escape the idea that it’s more than a collection of ancient inspirational stories. I once heard someone describe the experience of reading the Bible like “looking through a keyhole and seeing an eye looking back at you.”5

Maybe the extraordinary life of some Christian has caused you to wonder if there is more to Jesus than fairy tales and religious chicanery. You wonder how they possess such inner peace, joy, and grace in the vicissitudes of life. I experienced that wonder through my parents. Seeing how real God was to them, how generously they treated people, how joyful they were in struggle and disappointment, and how quickly they ran to God with their problems gave me a glimpse of something I knew had to be real. Their lives made me turn aside and listen.

One of the most effective “evangelists” I’ve ever known was a young girl with cystic fibrosis, lying in a hospital room, terminally ill. Two years earlier, she had received a double lung transplant but quickly began to experience complications. A few months later, she was diagnosed with a very aggressive kind of cancer. The doctors told her that there was nothing more they could do and that she had less than a year to live. To most, her story seemed devastatingly tragic — a young girl cut down in the prime of her life. But I can’t remember ever being in the presence of another person who exuded such consistent serenity and joy. She told the doctors and nurses on her floor and anyone else who would listen that what she was going through was nothing compared to what God had prepared for her in eternity — that our lives, whether we live to be 20 or 120, are only small drops of water compared to the expansive beauty of eternity’s ocean. During her last few months, I seemed to meet new people in our church every week impacted by her testimony. Her life was a burning bush that beckoned many to turn aside.

Are you encountering one of these burning bushes now? Have you turned aside to listen?

Is there a burning bush in your life? What is it? What is God saying to you in your circumstances? Come share with us on our blog. We want to hear from you! ~ Devotionals Daily