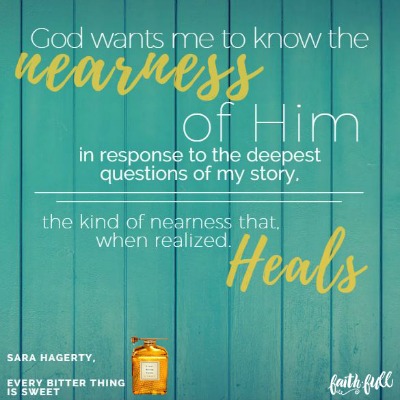 When we’d first moved from Chinquapin into our new home, I had a moment, followed by a few other moments, when God broke in. It wasn’t mystical. In fact, it felt very natural. God spoke to me not audibly but as a resounding sense in my spirit. As far as I could tell, He said to me, You will conceive a child this September.

Now, while I believe in the voice of God speaking today, I am also wary of what I know even more intimately — my flesh. I can hear things I want to hear, and my imagination, at times, might be just as clear as what I perceive to be the voice of God. So I asked Him for confirmation. Lord, if this is You, confirm it — not once but twice.

The details of His confirmation were enough for me to believe, with as much of my being as I was capable, that Nate and I would be parents the next summer, nine months following September of 2005. I thought God gracious to prepare me, one who might benefit from having more than the typically allotted time to carry a baby.

At that time, we had no idea the fertility challenges awaiting us. Like most young wives, I assumed that “trying” to have children means conceiving children. So leading up to that September, I lived confident that I would be pregnant soon. I didn’t waver in my expectation. I had no reason to. I had heard from God other times, but never this clearly. Never did a sense I had or a nudge from Him carry the grace that this message did to spur on my prayers. I wound up thanking God for what He was about to do more than even asking Him to do it. This was going to happen.

In early October, I realized that the expectation I’d held with such confidence was false. There was no baby in my womb. The disappointment that flooded me had less to do with Him and more to do with me. I didn’t doubt God, but I questioned my ability to hear. Was it time to question my sanity?

All my life I had set up camp on the side of caution, leery of anyone who “heard” from God. Interpretation was dangerous, and I was now living the fulfillment of that very danger. I’d spent three months wasting time planning on a vaporlike outcome, all based on a sense I felt I was given that something was coming.

Little did I know that one month of disappointment was a precursor to nearly a decade of tasting the same bitter flavor.

It wasn’t only one September that I didn’t conceive. It was many Septembers, Octobers, and Novembers in the years ahead. Every question I had about what I’d believed God had promised fit into a backpack I wore into every interaction I had with Him, like the memory of a marital betrayal.

Four years passed before I gained any insight into that particular exchange with God.

In March of 2009, we received our referral for two children from Ethiopia after an arduous year and a half in the hamster wheel of adoption. A pint-sized girl and her little brother. I found myself giddy at times, unable to sleep, dreaming about holding these two for whom we’d waited for so long. Months later, we prepared to get them. To cross the expanse of one segment of our waiting in the form of the Atlantic Ocean. Africa held a fulfillment — them for us, and us for them.

Weeks before we left, our case was heard in Ethiopia. Just after we passed court, we received our little girl’s birth date.

When a mother on one continent gave birth to a child, that same child was conceived for another mother, halfway around the world. One little girl’s birth was this adoptive mom’s conception. The day she was begotten on this earth, she was destined to be mine.

Months before our referral, I asked the Lord to confirm that these two children were ours.

He knew before I asked and gave me confirmation. Four years earlier. As if to say, Prepare. Wait. It will be a long gestation, but you will give birth. Your conception lies in another mother’s birth.

September no longer held a sting for me. It brought new life.

The darkness of waiting, and many of its questions, had a new name. It was no longer a tomb, but a holding place for resurrection.

My wilderness gave way to Eden.

My hand gripped the edge of the bathroom sink as I once again scrutinized the pregnancy test. Was there (maybe?) a faint line I was missing in this light? I didn’t count the number of tests I’d taken. There were no line items in our monthly budget for check, check, and double check. But maybe there should have been. Even a negative result is an indicator that hope is still alive. Every time I took a test, I believed, again, that this barrenness might end.

I ran my fingers across my midriff, the womb that had not yet known child, my body absent of the stretch marks so many women wish they didn’t have.

Even with two children in my home with whom I could not be more in love, I felt the ache of my body, broken. My barrenness remained a question mark over my life, even now that I was a mother.

How is it that adoption didn’t completely fill my mommy void? I was beginning to conclude that that void wasn’t really a mommy void at all. I wasn’t longing to have my skin stretch to hold another. I rarely felt the ache to have a child who looked like Nate and me. I hadn’t spent my young adult days dreaming about pregnancy. My continued grief, my longing, was not a sign of dissatisfaction with the children God had given me. I loved them as my own flesh.

I struggled, instead, with knowing that God could heal me, but He hadn’t.

It seemed like ages ago that I had sat in the doctor’s sterile office, which sought to be promising with its photographs of newborn babies pressed against smiling mommies whose bodies, unlike mine, were complete. His bookshelves held catchy titles that said the opposite of his words. Instead of discussing The Fastest Way to Conceive, he said, “You’re an unusual case. Your body is hardwired with a condition that many women are able to change through diet and nutrition. Though this isn’t impossible, it won’t be easy for you.”

Despite his words, I left the office full of expectation that God would trump this diagnosis. “What may take some people one year could very well take you six,” said this doctor. But when six years passed and I had watched a number of friends with this very condition conceive their first child and then their second and, some, their third, I remembered his words.

I had become that unusual case.

Standing at the bathroom sink, the suggested two-minute wait turned into four minutes, five, seven, and I dropped the plastic eight ball of a test into the trash can. I curled up on my bed and tried to think of something else, anything other than absorbing the impact of another month’s delay.

I thought about those who had watched me persist in prayer, against all odds. What will they say about You, Father?

But what I really meant to say to God was, What does my heart say about You, Daddy?

Another minute passed and I dragged the test out of the trash can.

At least the day before, I’d basked in hope. I’d made plans. I’d told the story in my head a hundred times. Expectant mother, expectant of God. He came through. I told you so, I said to those voices telling me that I was wasting time begging His ear when I could have rested in His sovereignty.

But it wasn’t to be this time. Not yet.

The props that had comforted me when a test was negative — the run for a chai, the venting session with a girlfriend, the media escape — would not be enough that day. I knew they never had been.

Fetuslike on my bed, I had only moments before little African feet would scamper across the floor and find me as their jungle gym. But He held time for me as holy pain created a crack within. This moment had a work to do, and God multiplied what little time I had to receive it.

I knew that my womb wasn’t the only thing barren. My inability to respond with trust, to lean, to rest peacefully in what God could do, but hadn’t done, exposed me. My instant response to that moment over my bathroom sink, to many moments like it, was far from eyes-on-Him. Instead of saying, Show me Yourself as Healer, I asked, Why haven’t You healed me?

My questions revealed my resistance to the vulnerability God loves. If I’d let it, weakness would continue to produce a need in me that would draw me nearer to Him.

I had surely grown since that first negative pregnancy test, but there was still much more of God to discover. Barrenness, like nothing else, reminded me how far I was from believing the truths about God that I proclaimed, how far I was from leaning against Him the way I wanted a baby to lean against me.

Yet He seemed to have ordained the emptiness every month’s not-yet created in my understanding. He seemed to be in the hunger itself.

There has to be more here, I finally breathed, forehead to knees.

I barely know You, I whispered within, loosening my grip.

Excerpted with permission from Every Bitter Thing Is Sweet by Sara Hagerty, copyright Zondervan.

May 7 is National Infertility Survival Day. Waiting and trusting God is a theme in every Christian’s life. Maybe you’ve walked Sara’s journey of barrenness waiting months or years or more for those two pink lines to appear. Maybe you’ve never known barrenness and waiting for a child to fill your arms and heart either by birth or by adoption, but you know the agony of waiting for what your heart hopes for. Maybe you’re waiting for a husband, or a job, or to be released from a season of struggle, or for healing from illness, or for the salvation of someone you’ve been praying for for years. Whatever you’re waiting for, what are your questions to God and what do they reveal about your heart toward the Lord? Come join the conversation on our blog! We would love to hear from you! ~ Laurie McClure, Faith.Full