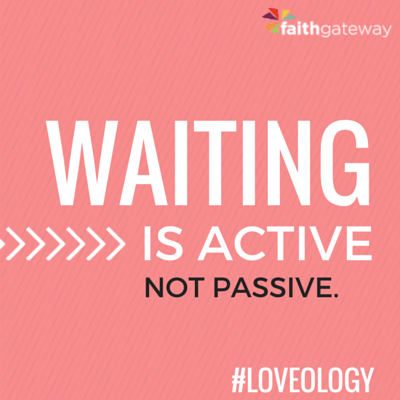 A Form of Torture Called Waiting

America is at war in Europe and in the Pacific. Millions of young men are dropping everything to go and fight. My grandfather, Bill Comer, is a senior in high school when he meets a girl named Ruth from the nearby town of Muncie, Indiana. A few months later, right after graduation, he joins the Air Force, but while he’s away at basic training, they start writing letters.

They fall in love. One letter at a time.

Ten months later she takes the train down to Alabama, where he’s in training, and they get married. Three days later he ships out for Guam. Not exactly an ideal way to start off a marriage. He’s a bomber pilot flying sorties over Japan, and she’s all alone at an Air Force base in the States.

They were nineteen and twenty.

Here’s what was crazy — that was normal! Most of that generation married right out of high school. But today, most of you will spend a decade between graduation and marriage. Tammy and I married young, but that’s so rare now that it’s weird.

For the first time in US history, there are more single people than married people. Fewer and fewer people are getting married at all.

Waiting is a part of life. Even if you marry young, like I did, you still end up waiting. There’s always something on the horizon, just out of your reach. Graduation, a job, an experience, a dream you’re working toward — the list is endless.

The trick is to learn how to wait well.

King David was no stranger to waiting. He spent thirteen years between his anointing as king and his coronation. That’s brutal.

When God has put something in you and you know it’s from the Spirit and it’s bursting to get out, but… nothing… happens. It’s torture. Waterboarding on the soul.

David spent most of that time on the run as a fugitive from his jealous rival, King Saul. He spent years hiding under rocks in the desert.

Psalm 37 was probably written during that time. At En Gedi or in some alcove tucked into a mountain. It’s a raw, unfiltered poem, one that questions if God’s ever going to come through. And if so, when? How much longer?

Do not fret because of those who are evil or be envious of those who do wrong; for like the grass they will soon wither, like green plants they will soon die away. Trust in the Lord and do good; dwell in the land and enjoy safe pasture. Take delight in the Lord, and He will give you the desires of your heart. Commit your way to the Lord; trust in Him and He will do this: He will make your righteous reward shine like the dawn, your vindication like the noonday sun.

For thousands of years, people like you and me have found solace in David’s lyrics. Because David’s story is our story. His lament is our lament. We all know what it feels like to be stuck waiting when we feel like we’re ready to move on. When “those who are evil” thrive and flourish and get ahead, and we shrivel up on the inside and fall behind and scrape by.

The truth is that God’s wisdom on love and marriage and sex and romance and the rest works as a general rule — not as a “promise from God” in every scenario, all the time, but as wisdom. As a general rule, people who follow the way of Jesus thrive, and people who buy into culture’s way don’t. But there are exceptions all over the place. And it’s the exceptions that get under our skin — that make us question why we should go through all this trouble if people who take the easy route sometimes do just fine.

David’s answer is, “Just wait”… “Like the grass they will soon wither, like green plants they will soon die away.” It’s only a matter of time until the bottom falls out. A relationship that was built on the sand will fall. It might take a year or a decade or longer, but it will fall. Of course, that’s not God’s heart — He’s all about healing and re-creation. The second you turn over your life to God, He’s right there, waiting to reset the foundation in your cracked relationship, because if you don’t get the foundation right, you’re in for disaster.

The way of Jesus is so different from the world. And Jesus’ way is good, but it’s hard. Really hard at times. Every cell in your body wants to cave in, to take matters into your own hands. To follow the crowd, not the Rabbi from Nazareth.

David says, “Just wait. Life isn’t over yet.” But waiting is hard to do. That’s why David’s call is to “wait patiently” for the Lord. Not for a man or a woman. Not for a proposal or a “yes.” Not for a ring wrapped around your finger, but for God. And don’t forget that God is with you, right now. You’re not solitary. You’re not alone.

You see, we’re not just waiting for God. We’re waiting with God.

Waiting is active, not passive. Notice the language. Trust, do good, dwell, enjoy, take delight in, commit, be still — seven staccato commands all leading up to “wait patiently” for the Lord. Each one is dripping with implications.

Trust in the Lord

To trust is to lean your weight on something. When you step out onto a bridge, you trust. You can do that with God. You lean your weight, your hopes, dreams, aspirations — all you are — on Him. He can take the weight.

Don’t let life happen to you. Do something with your life. Just do something good. Something that matters. Something that’s about God’s kingdom, not your comfort. Justice. Shalom. Partner with God for the healing of the world.

Life doesn’t start when you get married. Or when you graduate or get a job or reach a goal — or whatever it is that you’re waiting for.

You’re alive now. And life, as we all know, is evaporating. The biblical author James called it “a mist,” like your breath on a February morning. Waiting for the Lord doesn’t mean sitting around, working a dead-end job, watching TV, or hoping Mr. or Ms. Right falls into your lap. It means beginning to do good right where you’re at, and then watching your story unfold.

Dwell in the Land

Sink your roots deep. Dig in. Don’t bounce from job to job, city to city, relationship to relationship. Invest your life deeply, and be content.

What is contentment? It’s when your life is enough. When you’re satisfied with where you are, and when you are, and who you are. You don’t covet another person’s story. It’s when you’re enjoying the life God has spread out in front of you. This is hard for me. I’m always thinking about what’s next. Contentment is an elusive thing, isn’t it? Maybe that’s why the writer Paul says he learned to be content. Because it’s anything but the default setting for most of us. But you can learn to dwell. I am, and that’s saying something.

Do you enjoy your life? Or are you so focused on the future that you’re missing out on the present? So obsessed with what you don’t have that you forget what you do have? Life is a gift. Deeply enjoy every moment you can. Savor the ordinary. A cup of coffee. A meal with friends. A good night’s sleep. Laughter. Plant your feet on the ground and take it all in. Because what you’re doing now will set the stage for your future.

I know so many people who sit around dreaming about marriage, but if they met someone tomorrow, it would be years before they were ready to take that step.

Take Delight in the Lord

What a great line. Notice it’s a command — take delight in God. And when you take delight in God, when you look to Him for satisfaction, fulfillment, meaning, purpose, identity, validation — all the things you look for in love or a marriage or a career or a dream — your desires change.

This isn’t a formula to manipulate God into giving you what you want. It’s not saying that if you delight in God, then He will come through for you. No. This is about desire replacement. When you chase after God, more than any other thing, you will find that your desires for what you don’t have, what you’re waiting for, are replaced by the pleasure of what you do have, in God. When all of your heart is wrapped up in Him, your desires change.

Commit Your Way to the Lord

Whatever is in front of you, wherever you’re en route to, commit it to God. What does that mean? I think it means you make God your navigator. You pray, “God, here’s my map. Here’s where I’m going. I think this path is from you. But if I’m wrong or need a course correction, stop me, redirect me, turn me around. You lead. I’ll follow.”

Be Still Before the Lord

To be still is to slow down, take a deep breath, stop fidgeting, stop fighting, stop banging your head against the wall, and just be…

Do that right now. Take a deep breath. Then be still for a moment. See how good that feels?

Finally, after getting all that out on the table, David writes, “And wait patiently for Him.”

Notice how much is crammed into that last phrase. The imagery isn’t of a guy sitting in a waiting room, bored out of his mind, waiting for God to call his name. It’s of trusting, doing, dwelling, enjoying, cultivating, delighting, committing — it’s of a man or a woman walking with God into the future.

The reality is that there’s so much work to be done right now. Before you ever meet him or her, or get married. Before you graduate. Before you do whatever. There’s so much that has to happen in your life to shape you into the kind of man or woman who’s ready for that next step.

David wrote, “Those who wait for the Lord, they will inherit the land.” There is a land — a life rich with God’s blessing — that can be yours, but so much of it depends on waiting well.

Watch the Video for Loveology

“To be still is to slow down, take a deep breath, stop fidgeting, stop fighting, stop banging your head against the wall, and just be…” Join the conversation on the blog! We’d love to hear from you about waiting well! ~ Devotionals Daily