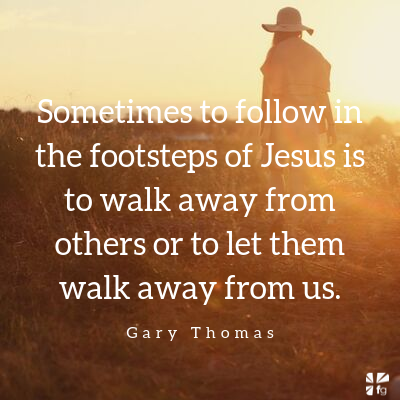 Since Jesus came from Heaven to walk among us, Christians tend to think that walking away from anyone, or letting anyone walk away from the truth, is a failure on our part.

But Jesus walked away or let others walk away… a lot.

I reread the gospels and counted every occurrence where Jesus deliberately parted ways with others. Sometimes He spoke a hard truth, after which the other person walked away. Other times, the people had been touched and begged Jesus to stay, but He had other places to go and left them. Overall, I counted forty-one such instances in all four gospels. Forty-one! Some of these references refer to the same encounter, but that still leaves more than two dozen distinct times when Jesus demonstrated walking away or letting someone else walk away.

These occurrences weren’t always rooted in conflict. Sometimes Jesus walked away from others who wanted more of Him. On still other occasions, He retreated for His own refreshment and renewal or protection. The point is that Jesus didn’t let the needs, pleas, attacks, or unresponsiveness of others distract Him from the mission given to Him by His heavenly Father.

Take, for instance, the story of the rich young ruler. Jesus discerned this young man’s heart and the core issue in his life — he loved money. When the earnest young man couldn’t walk away from his money, he chose to walk away from Jesus. Notice that our Lord didn’t run after him. Jesus didn’t say, “Wait! I know asking you to give 100 percent is a bit extreme; if you give away just 50 percent, I think we can make this work. I need followers! Let’s bargain!”

No, He turned to His disciples (reliable people1) and explained what had just happened and why it was so difficult for that rich man to join them. This is a direct example of Jesus choosing to spend time training reliable people rather than spending more time with a closed person. “Toxic” doesn’t seem to fit this young man’s profile, but the principle is clear: when truth is rejected, spend your time on those who will receive it instead of begging closed-hearted people to reconsider.

On another occasion, after giving a difficult teaching about eating his flesh and drinking His blood, Jesus lost a lot of previously enthusiastic followers:

From this time many of His disciples turned back and no longer followed Him. ‘You do not want to leave too, do you?’ Jesus asked the Twelve. — John 6:66-67

Notice the same pattern. Not just one, but many walked away. And not just casual onlookers; they’re called His “disciples.” Instead of chasing them down and begging them not to misunderstand Him and to please come back, Jesus turns to the reliable people, the Twelve, and says, “So, what about you?”

Notice the confidence that gives authority to His message. Jesus never appears desperate, manipulative, or controlling, as if when people didn’t agree with Him, His feelings would be hurt. He is mission-focused and others-centered to His deepest core.

Jesus also demonstrates the need to sometimes “verbally” walk away when dealing with a toxic person, like Herod. Instead of arguing with Herod and trying to justify himself, Jesus remained silent:

[Herod] plied Him with many questions, but Jesus gave him no answer. — Luke 23:9

Jesus adopted the same approach with Pilate and the religious leaders:

When He was accused by the chief priests and the elders, He gave no answer. Then Pilate asked Him, ‘Don’t you hear the testimony they are bringing against You?’ But Jesus made no reply, not even to a single charge — to the great amazement of the governor. — Matthew 27:12-14

Especially when you know it won’t make any difference, spend those few moments worshiping and relating to your loving heavenly Father rather than contending with a hateful assault.

A particularly vivid example of Jesus letting someone walk away occurred at the Last Supper. Jesus knew Judas was going to betray Him. He spoke about it in advance. And yet He allowed Judas to walk out of the room. He didn’t chase after him. He didn’t waste time trying to change Judas’s mind. Instead, He spent every last minute He had left investing in His faithful, reliable disciples and in prayer right up until the moment He was arrested.

The answer is, “He wouldn’t chase after them.”

Lord of His Life

Jesus didn’t just walk away from toxic people; He was also willing to walk away for purposes of ministry effectiveness and strategy. He never allowed the desire of others to dictate who He spent his time with. After a powerful time of ministry, Jesus became a rock star of sorts, and hordes of people wanted to be around Him. Jesus had gotten up early in the morning to pray, but the disciples furiously tracked Him down and said, “Everyone is looking for you!”

Just when people most wanted Him to stay, Jesus often left:

When Jesus saw the crowd around Him, He gave orders to cross to the other side of the lake. — Matthew 8:18

Jesus wasn’t moved by either standing ovations or jeering ridicule. He was truly Lord of His life. Neither should we allow the neediness of others or the toxicity of others to determine where, when, and how we spend our time. Neediness can be a subtle form of toxicity. Our spiritual radar goes way up when someone forcefully attacks us, but a passive-aggressive neediness can slip in unawares and steal our attention even more effectively than a full-frontal assault.

If someone is trying to control you, that itself is toxic.

Whether they use force or guilt, direct attack or unreasonable neediness (“You’re the only one who can help me, and you have to help me now”), it’s still all about control. Controlling someone (or letting yourself be controlled) is wrong.

As far as allowing Himself to be mistreated, though Jesus came to die the death of a martyr, He didn’t allow consistent and persistent abuse to continue throughout His life. He let Himself be tortured and crucified once, but there were many occasions before that when He “slipped away” from those who wanted to hurt Him.

Here are just three examples from the gospel of John:

At this, they picked up stones to stone him, but Jesus hid him- self, slipping away from the temple grounds. — John 8:59

Again they tried to seize Him, but He escaped their grasp. Then Jesus went back across the Jordan to the place where John had been baptizing in the early days. — John 10:39-40

So from that day on they plotted to take His life. Therefore Jesus no longer moved about publicly among the people of Judea. Instead He withdrew to a region near the wilderness, to a village called Ephraim, where He stayed with His disciples. — John 11:53-54

And here’s one from Matthew:

But the Pharisees went out and plotted how they might kill Jesus. Aware of this, Jesus withdrew from that place. — Matthew 12:14-15

Your persecution may not be physical stoning, but emotional shaming, slander, gaslighting, etc.1 Jesus once entered a ruler’s house to heal a dead girl. Notice the juxtaposition of how the people responded and what happens next:

They laughed at him. After the crowd had been put outside, He went in and took the girl by the hand, and she got up. — Matthew 9:24-25, emphasis added

Jesus didn’t argue with the crowd. He also didn’t just stand there and take it. He had the crowd “put outside.”

And then He did His work.

In the course of Kingdom work, whether you’re serving God in an office, at a soccer field, or in a school, being abused is inevitable. It seems to me that for every Christian who is bent on seeking first the Kingdom of God, there is a corresponding number of Christians bent on telling those seeking first the Kingdom of God that they are seeking the Kingdom in the wrong way. We can’t avoid this pushback without leaving this planet, but we can learn to walk away when the time is right and as God leads (which is what this book seeks to teach you). We can “put those people outside” and carry on our work.

Here’s what I’m getting at: don’t think that letting yourself be abused is always the holy choice. Proverbs 22:3 reads,

The prudent see danger and take refuge, but the simple keep going and pay the penalty. — (emphasis added)

The teacher is telling you it is supremely wise to step aside in the face of danger. If you don’t, you may pay a penalty, but not because of your “obedience.” Rather, your pain will be caused by being “simple.”

If life is about following Jesus, then at times we will follow Him as He walked away from abuse and danger. Jesus didn’t cede control of His life to anyone. He told His disciples that His death would be His choice, not His enemies’:

So then, in His words and in His practice, Jesus modeled how to let people go, how to walk away, and how to stay in charge of our schedule (and to a certain degree, not allow ourselves to be unnecessarily abused). Follow in the footsteps of Jesus by boldly walking away and finding a reliable person in whose life you can make a worthy investment.

Excerpted with permission from When to Walk Away by Gary Thomas, copyright The Center for Evangelical Spirituality.

So many of us have been taught that good little Christians do not ever cut off toxic people. But, that simply isn’t Jesus’ model. It’s time to shake off the false guilt and follow His lead. Come share your thoughts about Walkaway Jesus on our blog. We want to hear from you! ~ Devotionals Daily