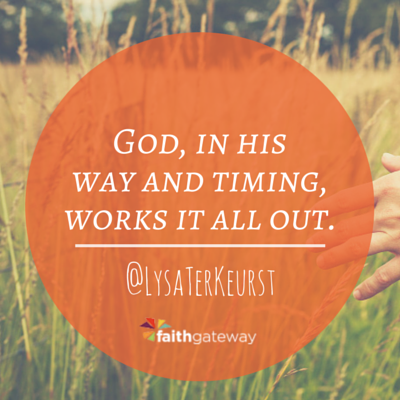 He said: “Listen, King Jehoshaphat and all who live in Judah and Jerusalem! This is what the LORD says to you: ‘Do not be afraid or discouraged because of this vast army. For the battle is not yours, but God’s.’” — 2 Chronicles 20:15

Thought for the Day: Seeking to obey God in the midst of whatever circumstance I’m facing is what positions me in the flow of God’s power.

Tucked away in the Adirondack Mountains of New York, Camp-of-the-Woods is an amazing getaway for families — great chapel preaching every morning, no TV, crystal-clear lake, campfires, fishing, putt-putt golf, shuffleboard, and more game playing than you can imagine. It’s also an incredibly beautiful place with all kinds of scenic views and walking trails. So when some exercise-loving friends suggested we join them for a moderate family hike, we thought that was a great idea.

Well, it turns out their definition of moderate came from an entirely different dictionary than mine. Actually, an entirely different planet, if I’m being completely honest. Honey, honey, honey… this was no moderate hike. I had pictured a path with a gently winding, upward slope. But what we actually experienced was more like scaling a cliff face made entirely of rocks and roots. Not kidding.

And we were at an altitude so high my lungs felt like they were stuck together and incapable of holding more than a thimbleful of breath. Lovely. And forget having any type of conversation. All I could do was mutter a few moans between my gasps for air. Up, up, up we went. And when another group of hikers passed us on their way down and cheerfully quipped, “You’re almost halfway there!” I wanted to quit. Halfway? How could we be only halfway?!

I pushed. I pulled. I strained. I huffed and puffed. And I might have even spent a few minutes pouting. But eventually, we reached the top. I bent over, holding my sides and wondering how a girl who runs four miles almost every day of her life could feel so stinkin’ out of shape!

Climbing up the mountain against the force of gravity was hard. Really, really hard. But coming down was a completely different experience. I navigated the same rocks and roots without feeling nearly as stressed. I enjoyed the journey. I noticed more of the beautiful surroundings and had enough breath to actually talk all the way down.

About halfway down the trail, it occurred to me how similar my experience of this hike was to my Christian walk. Starting at the top of the mountain and working with the force of gravity was so much easier than starting at the bottom of the mountain and working against it. Although I had to navigate the exact same path both directions, being in the flow of gravity made the journey so much better.

It’s just like when I face a hard issue in life.

Seeking to obey God in the midst of whatever circumstance I’m facing is what positions me to work in the flow of God’s power. I still have to navigate the realities of my situation, but I won’t be doing it in my own strength. My job is to be obedient to God, to apply His Word, and to walk according to His ways — not according to the world’s suggestions.

God, in His way and timing, works it all out.

That’s what happened with King Jehoshaphat in 2 Chronicles 20. He stayed in the flow of obeying God in his actions and reactions. I’m sure if he had tried to figure out how to win this battle based on his limited strength and numbers alone, he would have surely given up. Judah was outnumbered. No question. But instead of counting themselves out, the king and his army counted God in and determined to do exactly as He instructed.

I want to participate in God’s divine nature rather than wallow in my own bad attitude and insecurities.

Then I won’t have to huff and puff and pout while trying to figure everything out on my own. I stay in the flow.

Lord, help me to trust that You’ve got it all figured out and to remember that I don’t. Help me to say yes to You even when it’s hard. Help me to say no to anything that doesn’t align with Your Word. Amen.

Have you ever walked at a normal stride onto an escalator or an airport people mover that was going the opposite way? That might be fun exercise but it’s not the way we want to walk in our spiritual lives — working so much harder and wholly on our own effort! Pause and ask the Lord to show you in what area you may be living out of alignment with God’s Word and see what happens when you adjust to His way. Join the conversation on our blog! We would love to hear from you! ~ Devotionals Daily