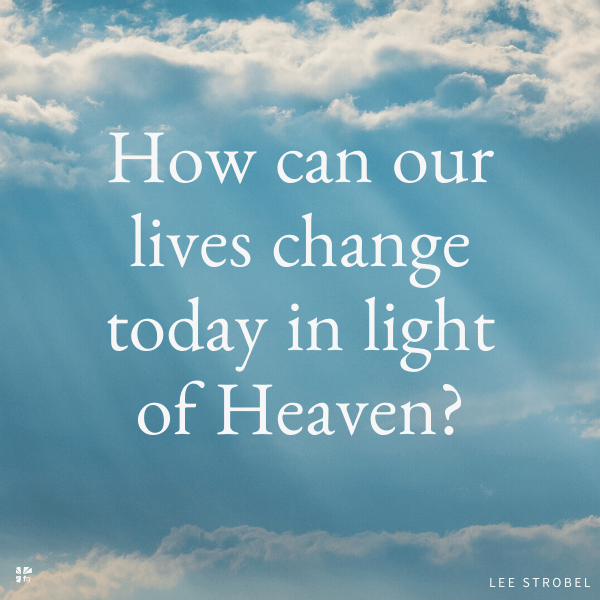 If you read history you will find that the Christians who did most for the present world were just those who thought most of the next. ~C. S. Lewis, Mere Christianity

My friend Nabeel was afflicted with stomach cancer. There I was, sitting at his hospital bedside in Houston just days before he died. His face was gaunt; his legs were thin and bony. He was wasting away at the age of 34.

Nabeel Qureshi was a devout Muslim whose investigation of the evidence for Christianity brought him to faith in Jesus. Already a medical doctor, he went on to earn two more advanced degrees and become a bestselling author and worldwide speaker. His death was a blow to all of us who called him friend.

He died in 2017. But just today, as I was preparing to mention him in this book, I saw him again — this time, through a video someone Tweeted on the third anniversary of his passing. In a speech given at some unspecified time in his ministry, here’s what Nabeel was saying:

“In our post-Enlightenment world, especially in university settings, it’s a popular belief that there is no such thing as the supernatural. What the resurrection means, then, is that this is wrong. There’s something more to this world — something that can bring people back from the dead. And if that is true, then that means if it comes to a point in your life where it seems there is no hope — where it seems like even death is inevitable and there’s no way to escape it — well, death is not the end. There’s more. There’s hope — no matter what.”

Yes, Heaven means hope — not a vapid kind of wishful thinking or a cross-your-fingers sort of blind optimism, but a confident hope. I trust I will be reunited with my friend Nabeel someday — and the persuasive evidence for the resurrection and the reality of Heaven tells me that my trust is indeed well placed.

The truth is that the resurrection is nothing less than the pivot point of history. Said N. T. Wright, “Jesus’ resurrection is the beginning of God’s new project not to snatch people away from Earth to Heaven but to colonize Earth with the life of Heaven.”

Here’s the story of Jesus that Scot McKnight told so succinctly in my interview with him: “He was the Messiah; He died unjustly at the hands of sinners; God overturned His death and raised Him; He ascended; and He’s coming back to rule.” No wonder the Bible calls this the gospel — it truly is “good news”!

And it means that for followers of Jesus, who gratefully embrace Him as their forgiver and leader, death is merely a doorway to a world of grandeur and wonder, of satisfaction and joy, of flourishing friendships and stimulating experiences, of gazing with gratitude at the face of our Savior and Lord — and yes, as Charles Spurgeon said, receiving his kisses.

Have you ever tried to imagine what forever will be like? “At our most creative moment, at our deepest thought, at our highest level, we still cannot fathom eternity,” said Max Lucado. I mentioned that to philosopher Chad Meister when I was interviewing him for The Case for Heaven, and he responded with a story.

“Imagine that one grain of sand represents your entire lifetime in this world. All the mountains upon mountains of sand on the planet — all the lifetimes that those grains represent — would just be the beginning of eternity.

“But now imagine you lived the worst possible life in this world — a lifetime of hardship and difficulties. I don’t want to diminish the suffering some people go through, but if that one grain of sand represents an entire lifetime of struggle, it would pale in comparison to the mind-boggling bounty of sand in the entire world.”

I processed that for a minute. Then I said, “That reminds me of a quote attributed to Saint Teresa of Ávila: ‘In light of Heaven, the worst suffering on earth will be seen to be no more serious than one night in an inconvenient hotel.’”

He smiled. “I don’t know about you,” said this academic superstar who was once on the verge of suicide as a spiritual skeptic, “but I find that so encouraging.”

How Should We Live Now?

If the Jesus story is encouraging to us, think about what it did for the people whose lives were intertwined with His. “Jesus was radically reconfigured and redefined by resurrection,” said Eugene Peterson. “And now they [the disciples] were being just as radically reconfigured and redefined by resurrection.”

Now they knew for sure that God was fulfilling His promise of Heaven — and that certain knowledge revolutionized their lives in this world. Their mission, their attitudes, their relationships, and their priorities were all turned upside down and inside out.

What about you and me? How can our lives change today in light of Heaven? Well, if the Jesus story is what leads us to our heavenly home, shouldn’t we delve deeper into His teachings — and commit to applying His wisdom to our everyday lives?

Knowing that we will someday inherit the riches of Heaven, shouldn’t we stop clinging to the earthly possessions that take our attention away from what’s really important? Anticipating a paradise of eternal pleasures, shouldn’t we stop our mindless pursuit of substitute indulgences that only bring fleeting enjoyment and leave lasting regret?

In the new Heaven and the new Earth, everything will be made right, so shouldn’t we start setting things right in our own relationships now? The Jesus story culminates in our clemency, so can’t we offer forgiveness to those who have offended us — and shouldn’t we seek forgiveness from those we’ve hurt?

I know how difficult it can be to set things right. A while ago, I knew I should reconcile with someone I had mistreated, but I felt too intimidated and embarrassed to do it. It was going to be hard for me to admit fault, and I was concerned he might lash out at me. I knew I would be acting in accordance with God’s will if I reached out to that friend, because the Bible says,

If it is possible, as far as it depends on you, live at peace with everyone. — Romans 12:18

So I prayed, asking God to give me the courage to follow through.

Did I immediately feel electrified by God’s power? No, I still felt apprehensive and inadequate. Nevertheless, as I walked toward the phone in obedience and forced myself to punch in the man’s number, God gave me strength as strength was needed. And sure enough, as the conversation unfolded, God emboldened and guided me through a very difficult talk — and today I’m fully reconciled with that friend.

Can you take steps toward righting a wrong in your life, with God’s help? Since Jesus’ story is all about reconciliation with God, let’s not wait until Heaven to make amends for past transgressions and to repair fractured friendships. I’ve learned that as we walk down the path of Jesus, He will unfailingly give us power along the way.

Brother Andrew, known for smuggling Bibles into closed countries, found this to be true over and over. When he sensed that God was leading him to bring Christian materials into a nation, he took concrete action in obedience, even when the door of entry seemed securely shut at first. Somehow as Brother Andrew approached the border with his books, God would always empower him to fulfill his mission.

“The door may seem closed, but it’s only closed the way a supermarket door is closed,” he said. “It stays shut when you remain at a distance, but as you deliberately move toward it, a magic eye above it sees you coming, and the door opens. God is waiting for us to walk forward in obedience so He can open the door for us to serve Him.”

Can We Trust God to Do What’s Right?

Perhaps for you, there’s still a hitch in the story about Jesus. You’re wondering if God is really fair. If Jesus holds the keys to Heaven, what’s the fate of those who never get a chance to hear His message of redemption and eternal life? This issue troubled me so deeply as a new Christian that I drove hundreds of miles to meet with a well-known scholar to get answers.

What I learned was that God hasn’t told us explicitly how He is going to deal with them.

The secret things belong to the LORD our God, but the things revealed belong to us and to our children forever,” says the Bible in Deuteronomy 29:29.

But we do know a few things to help us sort through this issue.

But both the Old and New Testaments tell us that those who wholeheartedly seek God will find Him (see Jeremiah 29:13 and Hebrews 11:6). In fact, the Bible says that the Holy Spirit is seeking us first, making it possible for us to seek Him. This suggests to me that people who respond to the understanding that they have and who earnestly seek after the one true God will find an opportunity, in some way, to receive the eternal life that God graciously provides through Jesus.

Sometimes we get a glimpse into how God accomplishes this. I remember meeting a man who had been raised by gurus in an area of India where there were no Christians. As a teenager, he concluded there were too many contradictions in Hinduism and its teachings couldn’t satisfy his soul. He called out to God for answers — and in an absolutely remarkable series of events, God brought people into his life who shared the story of Jesus with him. As a result, he became a follower of Christ.

In my book The Case for Miracles, I document example after example of how Jesus is appearing in spectacular dreams to Muslims in countries that are closed to the gospel, pointing people down the path to eternal life with him. There has been a virtual tsunami of these cases around the Middle East and beyond, including in my late friend Nabeel Qureshi’s journey toward Christ. We can be confident that whenever people — of any race, in any culture, at any time — cry out to God, He will respond, often in stunning and unexpected ways.

After all, we see in Scripture that God is scrupulously fair. The very first book of the Bible asks, “Will not the Judge of all the earth do right?” (See Genesis 18:25.) Observed one author, “When God is finished dealing with all of us, none will be able to complain that they were treated unfairly.” In other words, when history is consummated, we will each personally marvel at how absolutely perfect God’s judgment is.

Finally, we know that apart from the payment that Jesus made on the Cross, nobody has a chance of getting off death row. Exactly how much knowledge a person has to have about Jesus, or precisely where the lines of faith are drawn, only God knows. He and He alone can expose the motives of a person’s heart (see 1 Corinthians 4:5).

In the end, all we really needed to know about the matter is this: God is good, God is loving, and God is fair. When we’re confident of those foundational truths, we can thoroughly trust Him for the outcome.

Excerpted with permission from The Case for Heaven: A Journalist Investigates Evidence for Life After Death by Lee Strobel, copyright Lee Strobel.

In Christ, we have hope not just in this life, but the for the next as well. Come share your thoughts with us! We want to hear from you.