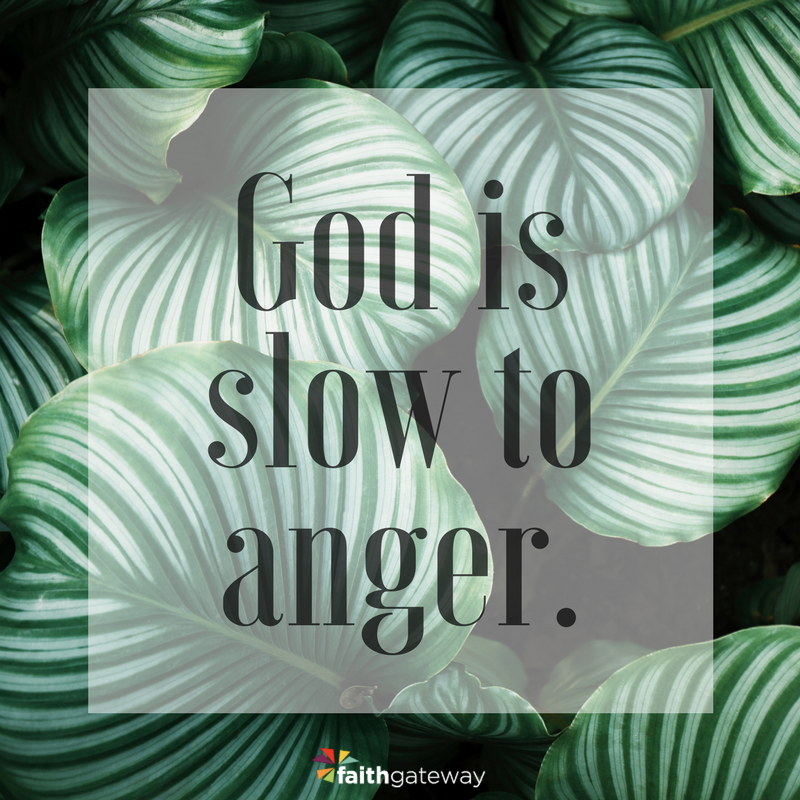 Editor’s note: Who is God? How can we relate to him? John Mark Comer takes a look at the names and descriptions of God in order to understand what is revealed about Him in Holy Scripture and to deepen our relationship with Him. Enjoy this excerpt of God Has a Name.

Next up on the list is “slow to anger.”

This is a fun one. In Hebrew, it’s erek apayim, and it literally means “long of nostrils.”

True story. Not making this up. God’s nostrils are loooong, believe you me.

Contrary to popular opinion, there is no such thing as a literal, word-for-word translation of the Bible. It’s impossible to directly translate one language into another, especially an ancient Semitic language like Hebrew into modern English.1 But “slow to anger” does a great job of capturing the meaning behind this ancient word picture.

Think about what happens when you lose your temper: your chest sucks in a gulp of air and your nostrils flare out as you verbally unload on your victim.

If you’re slow to anger, when you get mad, you shut your mouth, purse your lips, and breathe in through your nose.

This phrase is used twice in a collection of ancient Hebrew wisdom sayings called Proverbs. In each example, we learn more about this aspect of Yahweh.

Whoever is erek apayim has great understanding, but one who is quick-tempered displays folly.2

Here, the antonym of slow to anger is “quick-tempered” — you get mad quickly and easily. There’s a similar maxim in Proverbs 16:

Whoever is erek apayim is better than the mighty, and he who rules his spirit than he who takes a city.3

So here’s the basic idea:

you can make God mad, but you really have to work at it.

Now, there are two sides to this part of Yahweh’s character…

On the one hand, God is slow to anger.

Unlike the other “gods,” Yahweh doesn’t have a temper. He’s not volatile or edgy or spasmodic. He doesn’t fly off the handle or slam the door and storm out of the house in the God version of a temper tantrum.

When the Hebrew Bible was translated into Greek, the Hebrew scholars translated erek apayim with a Greek word meaning “patient.” Actually, the earliest English translations used the word long-suffering. That’s even better. It does a great job of capturing the idea.

There was another ancient translation of the Hebrew Bible called a Targum. It was a translation into Aramaic — probably the language Jesus grew up speaking. This translation was more of a paraphrase — they were free and limber with the original Hebrew. But I love how they translated Exodus 34: God is

patient, the One who makes anger distant and brings compassion near.4

In this reading from around the time of Jesus, Yahweh’s anger is far away, but His compassion is close by.

Kind of like Daniel Day Lewis. Didn’t see that coming, did you?

Anybody seen the movie Lincoln? Lewis’s performance in that film is incredible. I love the scene where the president is with his Cabinet at a late-night meeting in the White House. He wants to pass the Thirteenth Amendment and put an end to the plague of slavery, but his entire team is against him. Every single member.

He’s the solitary voice. There’s a dramatic moment where his Cabinet is yelling at each other like hormone-heavy teenagers, but Lincoln is just sitting there at the head of the table, quiet and calm. The infighting gets nasty and keeps ratcheting up until, finally, he slams his fist on the table and yells, “I can’t listen to this anymore!”

A hush falls over the room. Because anger is so far out of character for him. As you can imagine, they all shut up and listen.

I love that, because when Lincoln finally lets out his anger, it’s on purpose, deliberate, and under control. And it’s fitting. It’s the right emotional response.

I think that moment does a great job of capturing “slow to anger.”

I’m not sure how you imagine God, but if you think of Him as mercurial and ready to zap you with lightning the second you blow it, that’s just not what God is like. At all.

He does get mad. Really mad at times. This is something we don’t like to talk about, but we need to.

A lot of people today have abandoned the idea of an angry deity in the sky as a hangover from a premodern, superstitious age. But the Scriptures speak of God’s “wrath” more than six hundred times.

Here are a few samples…

In Psalms, we read:

God is a righteous judge, a God who displays His wrath every day. If He does not relent, He will sharpen His sword, He will bend and string His bow.5

God has a sword? A bow? A weapons depot? Maybe that’s why the prophet Habakkuk prays, “In wrath remember mercy.”6

You don’t want to get on God’s bad side.

King David says this about God:

You hate all who do wrong; You destroy those who tell lies. The bloodthirsty and deceitful you, Lord [Yahweh], detest.7

Or in another poem:

Yahweh examines the righteous, but the wicked, those who love violence, He hates with a passion.8

But I thought God is love.

Well, notice who God hates — the “wicked” and “those who love violence.” Imagine the terrorist in a shopping mall with bombs strapped to his chest, the con artist ripping off the elderly widow, the corrupt politician, the abusive father, the date rapist who gets off scot-free, the pedophile who gets called “uncle.”

When people say to me: I can’t believe in a God of wrath, I say: Yes, you can.

You’re right. It’s not how it’s supposed to be. It’s not God’s will. There’s no secret plan behind all the injustice in the world. It’s evil, plain and simple. “Gods” and human beings are at war with Yahweh. Yes, Yahweh has a plan to work all this mess into good, but He still feels the pain of war. Remember He’s a person, not an idea. He has feelings. And He feels anger over evil in the world.

There are times when the healthy, emotionally mature response to evil is anger.

When you think about God being angry, what comes to mind? Have you thought of Him as having a hair-trigger response to sin? Or no trigger at all? No anger. Why is the anger of God so important? Come share your thoughts with us on our blog. We want to hear from you!