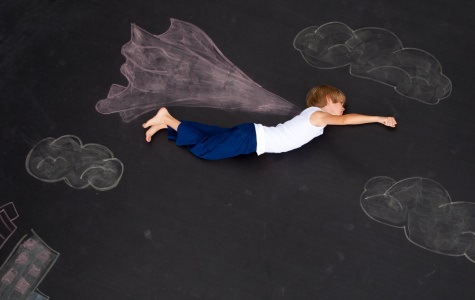 Awesome is a lot simpler than you think, because you used to know awesome quite well.

Everyone did at one point. Especially when we were kids.

I was reminded of this one night as I was walking down the hall at home. My daughters were brushing their teeth, an event that usually boils over to an international crisis. This time, though, they weren’t fighting for sink space—they were talking literature.

I heard L.E., my 9-year-old, say to her little sister, McRae, “Did you know that the guy who wrote The Twits also wrote James and the Giant Peach?”

I heard McRae respond, “I know! I love that guy. He’s got a great imagination, like me.”

What a powerful declaration.

Roald Dahl has been called the greatest storyteller of our generation. He also wrote Charlie and the Chocolate Factory. He’s sold millions and millions of books. And in McRae’s little 6-year-old mind, his imagination is on par with hers. He’s her peer.

You used to believe like that too. You used to turn sticks into swords or dirty flip-flops into glass slippers. You climbed trees and made forts and thought being a doctor wasn’t out of reach. Nothing was out of reach.

Then, somewhere along the way, you lost it.

Maybe someone who mattered to you told you that your version of awesome didn’t matter. When my friend Liz was in the eighth grade, she loved to dance. It was all she ever did. One day, her mom pulled her aside and said, “You know you’re not going to be a Rockette, right? You know that’s not in the cards for you, right?”

Do you think Liz danced a whole lot after that? Of course not. She gave up her dream of awesome that day.

As a parent, I understand the temptation to tell your kid something like that. You don’t want Simon Cowell to be the first person who introduces your daughter to the idea that she can’t sing. But there’s an inherent problem with this approach to life. When a parent, a boss, a teacher, a spouse, or a friend tells you what you can’t be, they’re predicting a future they don’t control. They don’t know what 25 or 35 or 55 looks like for you.

What if, when he didn’t make the varsity basketball team his sophomore year of high school, Michael Jordan’s dad had pulled him aside and, putting his arm around a young Michael, said, “You know you’re not going to play in the NBA, right? You know that’s not in the cards for you, don’t you?”

Maybe your mom never told you that your dream was too big, but chances are you’ve been telling yourself that for years—maybe decades. The way your brain developed certainly hasn’t helped the cause.

When you were young, your right hemisphere or “right brain” was in full force. It was the guy in charge, and it was the part of your brain that embraced curiosity and adventure and was constantly unafraid to ask Why? and Why not? Your brain was this way when you were a child because you were learning at a rapid clip. You were learning language and the laws of physics and the elements of balance. You had to be unguarded so you could absorb everything—even some pain here and there—so you would know how to thrive in this land called life-outside-the-womb.

But as you grew older, the other hemisphere, the “left brain” began to gain a voice. It began to say things like, “That’s impossible,” or, “They will laugh at you,” or, “Don’t be foolish.” Your left brain plays an important role in your thinking because it is the voice that teaches you to not touch the hot stove or jump off the top stair like you are a superhero. Unfortunately, it can also make a very logical and compelling argument that what it says is final. As we grew up, most of us came to believe the left brain’s assertions, and as a result we lost the sense that awesome was around the corner. Instead, we started to believe that awesome was not in the cards for us or that it was illogical or simply “childish.”

The good news is we can recover those childlike notions of grandeur. But it takes more than simply acting like a child again. You know some things as an adult that you couldn’t have known as a child. And you possess some skills that no child can develop. While I encourage you to think like my daughter does about the famous author—because your perception does truly fuel your reality—the best news is that now you can apply that thinking like an adult.

The road to awesome is still accessible. Now, as an adult, you have the tools to head down it immediately.

Regardless of your age or station in life, it all comes down to one simple truth: you just have to start.