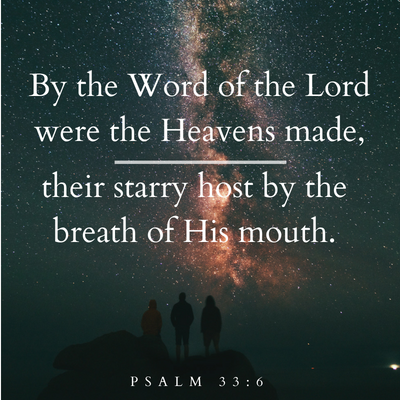 Did God Create Everything Out of Nothing?

The notion that God created everything from nothing has fallen on hard times. A surprising number of philosophers and theologians dogmatically contend that the doctrine of creation out of nothing (ex nihilo) has little scriptural support. But the opening statement in Scripture —

In the beginning God created the heavens and the earth

—points to the truth that God created everything out of nothing. Indeed, only three options exist, and only one corresponds to reality.

First is the view that in the beginning nothing existed. Neither mass, nor energy, nor the Almighty. Nothing, nothing, simply nothing. Logic, however, screams that nothing comes from nothing!

Furthermore, there is the untenable notion that something existed, but that something was an impersonal potentiality out of which every potentiality — from protein molecules to personal mind — emerged. This idea, however, hardly advances the proverbial ball. As common sense tells us, every effect must have a cause equal to or greater than itself.

By faith [not blind faith but faith grounded in evidence] we understand that the universe was formed at God’s command, so that what is seen was not made out of what was visible. – Hebrews 11:3

Did God create everything out of nothing? Absolutely!

The very first sentence of Scripture demands it. And an age of scientific enlightenment can abide nothing less.

By the Word of the Lord were the Heavens made, their starry host by the breath of His mouth. – Psalm 33:6

What is the Doctrine of Creation Out of Nothing (Creatio ex Nihilo)?

Try for a moment to think about nothing — no people, no plants, no water, no air, no matter, no energy, no time, no space, no God. Nothing. Simply nothing. The more we ponder such nothingness, the more clearly we realize that the notion of nothingness could not be further from the truth. To posit that God created everything out of nothing immediately resolves the issue. And that is precisely what the concept of creation ex nihilo does.

First and foremost, creation ex nihilo advances the doctrine that the eternally existing God created the universe out of nothing at all.

Furthermore, creation ex nihilo acknowledges that all that exists except God was created by God a finite time ago.

Finally, the doctrine of creation ex nihilo rules out the idea that such finite realities as space, time, and matter emanate from the essence of God: creation is neither divine nor a derivative of God’s essence.

Simply put, the God of all that exists freely chose to speak, and the cosmos leaped into existence.

Source (and for further study), see Paul Copan and William Lane Craig, Creation Out of Nothing: A Biblical, Philosophical, and Scientific Exploration (Grand Rapids: Baker Academic, 2004).

Can the Big Bang Be Harmonized with Genesis?

The Big Bang theory supposes that the universe began as an infinitely dense singularity and has since been expanding for billions of years. Though the Big Bang is not communicated in the Genesis account of creation, it lends scientific credibility to the scriptural contention that God created the universe ex nihilo (out of nothing).

Furthermore, if the universe had a beginning, it had to have a cause. Indeed, the cause of all space, time, matter, and energy must be nonspatial, nontemporal, immaterial, and unfathomably powerful and personal. As such, the Big Bang flies in the face of the preposterous proposition that the universe sprang into existence out of nothing and lends credence to the Genesis contention of a Creator who spoke and the universe leaped into existence.

While we must not stake our faith on Big Bang cosmology, we can be absolutely confident that, as human understanding progresses, creation will continue to point to the One who spoke the universe into existence.

What have you believed about the beginnings of the universe that doesn’t fit biblically? What in Scripture has changed your mind? Come share with us on our blog. We want to hear from you! ~ Devotionals Daily