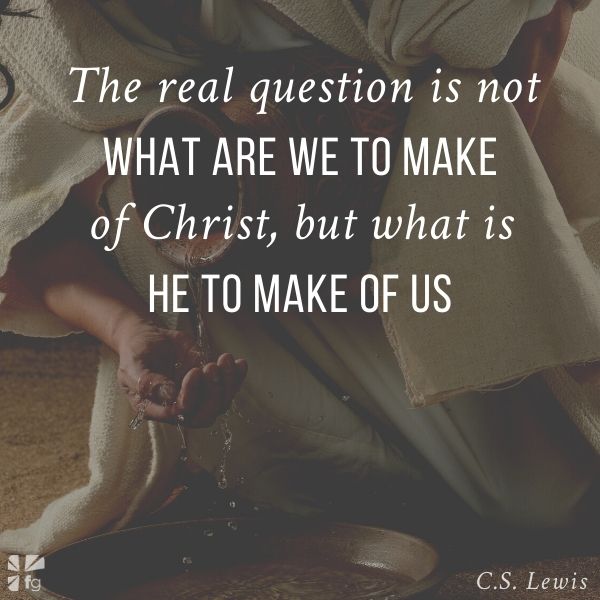 What are we to make of Jesus Christ? This is a question which has, in a sense, a frantically comic side. For the real question is not what are we to make of Christ, but what is He to make of us? The picture of a fly sitting deciding what it is going to make of an elephant has comic elements about it. But perhaps the questioner meant, what are we to make of Him in the sense of “How are we to solve the historical problem set us by the recorded sayings and acts of this Man?” This problem is to reconcile two things. On the one hand you have got the almost generally admitted depth and sanity of His moral teaching, which is not very seriously questioned, even by those who are opposed to Christianity. In fact, I find when I am arguing with very anti-God people that they rather make a point of saying, “I am entirely in favour of the moral teaching of Christianity”—and there seems to be a general agreement that in the teaching of this Man of His immediate followers, moral truth is exhibited at its purest and best.

It is not sloppy idealism, it is full of wisdom and shrewdness. The whole thing is realistic, fresh to the highest degree, the product of a sane mind. That is one phenomenon.

The other phenomenon is the quite appalling nature of this Man’s theological remarks. You all know what I mean, and I want rather to stress the point that the appalling claim which this Man seems to be making is not merely made at one moment of His career. There is, of course, the one moment which led to His execution. The moment at which the High Priest said to Him, “Who are you?” “I am the Anointed, the Son of the uncreated God, and you shall see Me appearing at the end of all history as the judge of the Universe.” But that claim, in fact, does not rest on this one dramatic moment. When you look into His conversation you will find this sort of claim running through the whole thing. For instance, He went about saying to people, “I forgive your sins.” Now it is quite natural for a man to forgive something you do to him. Thus if somebody cheats me out of £5, it is quite possible and reasonable for me to say, “Well, I forgive him, we will say no more about it.” What on earth would you say if somebody had done you out of £5 and I said, “That is all right, I forgive him?” Then there is a curious thing which seems to slip out almost by accident.

On one occasion this Man is sitting looking down on Jerusalem from the hill above it, and suddenly in comes an extraordinary remark—“I keep on sending you prophets and wise men.” Nobody comments on it. And yet, quite suddenly, almost incidentally, He is claiming to be the power that all through the centuries is sending wise men and leaders into the world. Here is another curious remark: in almost every religion there are unpleasant observances like fasting. This Man suddenly remarks one day, “No one need fast while I am here.” Who is this Man who remarks that His mere presence suspends all normal rules? Who is the person who can suddenly tell the School they can have a half-holiday? Sometimes the statements put forward the assumption that He, the Speaker, is completely without sin or fault. This is always the attitude. “You, to whom I am talking, are all sinners,” and He never remotely suggests that this same reproach can be brought against Him. He says again, “I am begotten of the One God, before Abraham was, I am,” and remember what the word “I am” were in Hebrew. They were the name of God, which must not be spoken by any human being, the name which it was death to utter.

Originally featured in God in the Dock by C.S. Lewis.

So… what do you make of Jesus Christ? And of Lewis’ insights on that very question? We’d love to hear your thoughts in the comments!