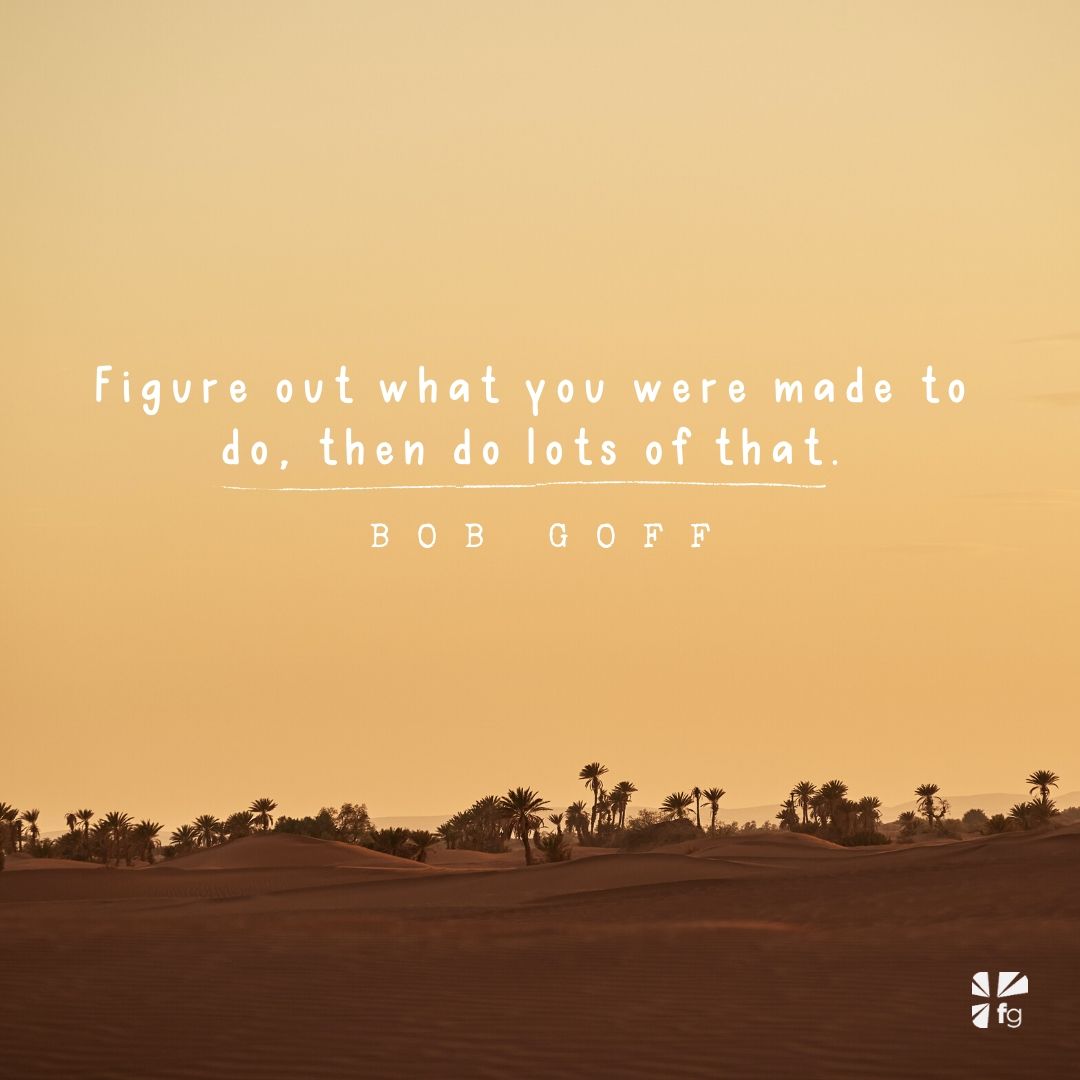 Trade what is simply available for what will truly last.

When I was in junior high school, I went with my parents to Hawaii. I was immediately smitten. Blue skies, crystal-clear water, white sand beaches, chocolate-covered macadamia nuts, and shaved ice with rainbow-colored syrup. My ambition at thirteen years old was to someday get a small place on the water in Hawaii. It seemed doable enough, right? I mean, how many puka shells could a beach house cost anyway? When I grew up, sadly, I found out how much a small place on the water in Hawaii costs: slightly more than a ship full of hundred-dollar bills.

Our dreams are birthed in childlike innocence, but as we grow up we discover more information that can be a buzzkill to our ambitions.

When I found out what a small place on the water actually cost, I wondered if I should abandon this dream. This is something we each decide at some point. We have an ambition and then face the headwinds that discouragement and reality and failure bring our way. That’s when we need to decide if our ambition is still worth it.

It turns out millions of dollars will only get you a surf shack a block from the water in Hawaii. At the time, I didn’t have ten bucks. You’ll need to decide what you’re going to do when you get some reality pushback on your dreams. If the front door is locked, you can walk away or look for a window that’s ajar to crawl through. Some of your ambitions are going to take time or a little creativity to figure out. Don’t quit on them. Wake up to new ways to get there, then do what it takes so you’re ready when your time comes.

While a small home in the Hawaiian Islands will always be out of reach for me, a small boat wasn’t. There aren’t many marinas in Hawaii, and the few that are there don’t have many slips. But get this — I found out that it was possible to rent a small boat slip for two hundred dollars a month if one became available. So I got on the waiting list at a marina in Honolulu. It’s a pretty long list. I’ve been on it for over two decades now and guess what? I’m only two dead people from the top, and I’ll have my small place on the water in Hawaii. Your ambitions are worth all the attention you’re willing to give them. Be patient. Get creative. Give it some time. If you can’t buy the house, get on the waiting list for the slip.

It’s not like you’re removing your own appendix to say it; it’s just not that hard to speak the words, and it will take less gauze. Get a starter list going. We’ll revisit it later and build it out with more focus and intention. If you want a convertible Porsche, don’t say you want world peace. Just get real about it. Wherever you are right now, just shout out as loudly as you can, “I want a Porsche!” You’re not trying out for Miss America, and nobody is going to give you a crown and a bouquet of flowers for saying you want to end world hunger if you don’t. Don’t pretend to be noble. Be real and it will be the most noble thing you’ll do all year. Trust me, heaven will be doing cartwheels if you will finally get real about what you really want.

What do you want for your life? If you’re like me, you want love, joy, happiness, meaning, purpose, and a more courageous faith. The trick to finding these things is discovering what ambitions you already have that will lead to them.

Guess what? For years you’ve already been quietly curating your life without knowing it. You know what works and what doesn’t. What lights you up and what bums you out. What lasts and what disappears. We need to figure out what you’ve come up with so far so we can figure out what to do next. Trust what you’ve learned already; let it be your Sherpa.

Once again, the best engine to drive our ambitions is a strong sense of purpose. There’s nothing really important about the vacation or the new pair of kicks or the convertible. These are things we might want for a time and might even enjoy for a while. They’re the short game though. Don’t confuse them with your ambitions. The long game is where your best ambitions reside. When you think you’ve found an ambition you want, figure out why you want it and whether you want it badly enough to do what it takes to get it.

We’re all looking for meaning, but it’s often lost behind a hedge of distractions, hurts, and disappointments. Figure out what these have been for you. Merely existing doesn’t satisfy most of us, so we pursue inputs that ultimately distract us from our lack of direction. At some point, though, even the distractions aren’t enough. Or someone else screws it up for us, and we end up wounded and lost again. The fix isn’t easy, but it’s this simple: We need to replace what we’ve settled for with what we’ve been longing for. We need to find ambitions worthy of our time and the effort it will take to pursue them.

For some, tremendous purpose will be found in a deeper expression of their faith. For others, it will be the accumulation of wealth or notoriety or adventure. Do whatever blows your hair back if you’re playing the short game. If you’re in it for the long haul and want to live a life steeped in purpose, a better long-term approach is to figure out who you want to be and let that inform what you do.

Don’t settle for what you’re simply able to do; figure out what you were made to do, then do lots of that.

As we get into the process of identifying and working toward your ambitions, don’t be too hard on yourself, okay? Going under the ice cap is hard work. It can get cold and lonely down there. Getting real is hard work too. If it were easy, you would have been there and back a dozen times already. Just ask Pinocchio. His ambition was to become less wooden and more real. It didn’t happen overnight or without a couple of setbacks and a lot of wood shavings. Rather than lie about it and have your nose grow, get real and watch your faith explode.

A long time ago, a friend told me there’s a difference between whittling and carving. One is just killing time, the other is laden with purpose. Keep carving. Engage the process; don’t stifle it. Go ahead and want the corndog and the surfboard and the date to prom. There is absolutely nothing inherently wrong with wanting those things. Just be sure they’re not the only ambitions you have. Take a look at what Jesus had on His list of ambitions and lift a few onto yours. His list wasn’t very long, but it changed the world forever. He was a master at choosing ambitions that were worth it.

Get this. His ambition was you. It was everyone else He created too. He made us with eternity in mind, sure, but also for tomorrow and the next day and the next, filled with touching lives with incredible intentionality. Identify what has captured your attention and what has distracted you. Fill your days with dozens of small, intentional acts of love. Take note of those ambitions you already have that Jesus also demonstrated and move them higher on your list.

God made us to enjoy each other and to reflect Him, and He derives tremendous joy when He sees us pursuing our unique desires with the skill sets He put in our individual tool boxes. I’m not really sure where He stands on corndogs, but I know He’s inviting us into lives that are more expansive and expressive, more loving and unselfish. He wants us to reflect His character in what we want and have these desires dwarf anything else that gets in the way. I’m certain He’s not asking you to mimic someone else’s ideas, desires, and dreams. Sure, be inspired by the lives other people are living and riff on them if it helps you get clarity, but as Sweet Maria tells me all the time (and as we’ll discuss later), keep your eyes on your own paper.

So, let me ask you again. What do you want? Jesus asked people what they wanted all the time. He didn’t have problems with the people who messed up grappling with the issues in their lives; He didn’t like it when people faked it. If you find yourself tempted to be artificial or disingenuous, find a new way to deal with your insecurity. Bite your tongue, swallow a goldfish, or shave off your eyebrows if you need to, but break the cycle. Look at Jesus. He surrounded Himself with disciples who couldn’t get the nets on the right side of the boat most of the time. At times they had desires that must have seemed superficial at best. But Jesus was kind, direct, and never mean to them.

When you’re real and authentic with Him, He won’t beat you up when you mess up because He’s embarrassed by you; He’ll embrace you because He loves you.

Remember the passage in the Bible where the blind man called out to Jesus so he could be healed? Jesus’ friends tried to help out by telling the man to stop yelling, but the blind man just yelled even louder. Maybe you should do the same if people have been trying to get you to quiet down about your ambitions. Quit whispering them to yourself and, instead, start shouting them into the world. Jesus asked the blind guy the same question He asks all of us every day. “What do you want me to do for you?” The answer must have seemed pretty obvious to the blind guy. But just like God in the garden with Adam and Eve, I don’t think Jesus needed to hear the answer. He wanted to make sure the blind guy was clear on his ambitions and knew what he wanted more than anything else. He wants the same thing from you too.

Where the story gets good is when the blind guy tells Jesus his deepest desire. “Rabbi, I want to see.” I can imagine him saying this with pleading, outstretched arms. Jesus wants the same for you — to gain more clarity on your faith, relationships, and what He uniquely made you for. He wants you to really see. Quit merely asking for thicker glasses when Jesus has invited us to climb up on His shoulders for a better view.

What do you want? As Bob would ask, what blows your hair back? Better yet, what were you made to do? Come share with us on our blog! We want to know what your deepest desires are! What would make your story good? ~ Devotionals Daily