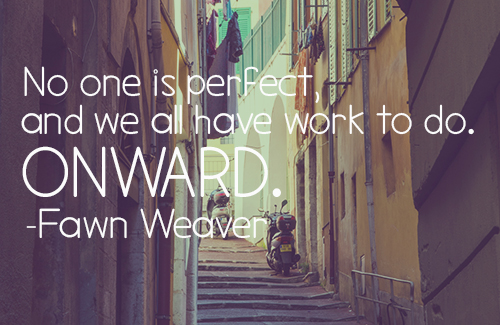 I bet you aren’t reading this book because you want to know about my personal life. At least not the part that doesn’t include marriage, so I’ll spare you the drawn-out details and give you some of the highlights. Grew up in what I’d consider a strict home. Hated rules and hated religion. Left home just shy of my sixteenth birthday. Slept on the couches of friends and in three long-term homeless shelters. Dropped out of high school. Attempted suicide twice. And all this before the age of twenty. I failed almost the entire first half of my life, and it took me years to get beyond the insecurities exacerbated by these failures. Or at least I believed I’d fully moved beyond them once things turned around and I began earnestly working on the life I most desired to live. Really, with the exception of children, the exact life I have now.

So why, in Rome, was my mind being flooded with questions about my past? Why was I reliving my youth and walking through ancient ruins in tears?

God led me into a lot of questions…

What else had prevented me from being a mother? Besides the fear of my marriage changing for the worst, was there something more? What was holding me back from being an excellent wife?

Yes, I had to admit that something felt off. That I had started the Happy Wives Club but still struggled to fully claim the ideals it stood for. As you can imagine, I was perplexed and more than a bit disappointed. However, I don’t want to suggest a pendulum swing in the other direction. I am truly a happy wife. Quite possibly the happiest I personally know. I love my marriage and my husband. I love our life together. My husband is happy, adores and cherishes me, and has a marriage beyond what he’d ever hoped or expected. He loves being married to me and tells me at least once a day (and has from the day we said, “I do”). But I had to come clean with myself — I was holding something back, either consciously or subconsciously.

Part of me knew this in my gut, but another part was purely factual. Weeks before I left on my journey, I had asked Keith a question I highly recommend every woman ask her husband. (That is, if you are able to accept the answer without making your spouse regret his honesty.)

As great as that felt, that wasn’t my question.

“I only want you to compare me against me. The wife I am now compared to the wife I have the potential to be.”

You know when someone doesn’t immediately answer a question but has to craft a response in his head first? Not a good sign, right? Keith stood for several moments scanning the ceiling. “Hmm… well…” He paused and looked me in the eye. “I’d give you a 7.”

There was no malice or ill will in his answer. In fact, I don’t think he considered 7 such a bad rating. But I was taken aback.

Not because of him but because of myself. Like any woman, I wanted to know that my husband thought I was flawless. And though Keith loves me unconditionally, he is also completely honest. He had given a score to something that I knew to be true deep down: as a wife, I still have a ways to go before I’m the best spouse I can be for my husband.

One of my greatest dreams early in life was to be an excellent wife and an excellent mother. At that moment, it turned out I was neither. The latter by default because I have no children. But the former, I had some influence over that, so what was holding me back?

You might be thinking, Geez, Fawn, go easy on yourself. A 7 isn’t so bad. For me, it’s a total failure, which is partly due to my professional past as a general manager for an internationally known hotel brand. When I managed the hotel, and we were rated by our guests on several aspects of their experience, I learned that the corporate headquarters had a policy. Any score of 8 or below is equivalent to 0. Everything below a 9 was unacceptable.

So, even if Keith had given me a solid 7, it computed to a 0 in my heart. While I acknowledge that’s not very logical, who ever said the human heart is? Keith’s number stuck with me for weeks and was leading the charge of my soul-searching as God guided me to a deeper understanding of myself.

The thing is, I wasn’t mad at Keith for unintentionally hurting my feelings. I just wanted to be the best wife I could be. So instead of groveling or licking my wounds, I took some action. I asked Keith if he would send me a list of six things I could improve to be a better wife. If our relationship wasn’t so strong, I’m sure he would have felt as if I were laying a trap for him. But it wasn’t like that. It took him a couple days, but he finally got the list to me.

I had to applaud him. He knows how to wrap constructive criticism in some disarming disclaimers. Here’s the list:

I read his list and immediately thought, Houston, we have a problem. While Keith was compiling his list, I had been compiling my own. I partly wanted to see how a self-assessment would stack up with his list, whether they’d match. Well, only one goal on his list matched one of the twelve goals I’d identified for myself. So not only was I not self-aware of the areas in which I required growth, but what I thought was important to my husband didn’t even make his top six list. On the one hand, I was disappointed that I even had deficiencies as a wife. On the other hand, I was ecstatic that some of the goals I’d identified on my list (especially the ones I found extremely tough) were not on his list. His goals were all doable. I could start working on them even before I’d return home.

I was determined to tackle everything on his list. But this was only addressing symptoms of a larger problem.

There was nothing on Keith’s list that we hadn’t talked about before. As a matter of fact, there was nothing he hadn’t shared with me at least ten times before. So, what was holding me back from improving myself as a wife?

What was keeping me from giving my all to this marriage, like all the happy wives I’d interviewed over the past two years? If being an excellent wife, mother, and person is what I believe to be the most important tasks of my lifetime, why has succeeding in business always taken such a large role in my life? This was the question I heard being asked over and over throughout my soul-searching “interview.” And the answer was something I knew in my heart but had never allowed to be said audibly. The reason I’d worked so hard to succeed, going to college in the evenings while working twelve-hour days for most of my adult life, was a fear of failure.

Oddly enough, I’ve never been risk-averse when it comes to business. I would give something all I’ve got, and if it didn’t work out, I’d move on to the next thing. I’m the same way with stocks and investments. I make calculated risks, but nonetheless, they’re risks. But maybe that’s because I never truly cared about being a successful businesswoman.

What I always cared most about was being a wonderful mom. One whose children consider her one of their best friends. Someone they could come to and be open with about anything and know they will not be judged, only loved unconditionally. I desired to be a mom and wife whose children and husband knew, every day of their lives, that no one was more important to me than them.

I jumped in with both feet in my marriage, and it has been an amazing journey and blessing in my life. But children seemed like a much greater risk because they not only jeopardized happiness in my marriage, I thought, but they also represented what could turn out to be my greatest failure.

My fear of failure, my fear of motherhood, my borderline workaholism, it seemed they were all interconnected. God had to take me to one to discover the other. I told myself there were two things I needed to do. First, become a better wife to my husband and a better friend and family member to those around me. Second, leave my fear of failing as a mother on the cobblestoned streets of Rome.

I typically don’t shy away from a fight, but it turns out that changing the very makeup of who you are is harder than most fights.

Still, though, I decided that I couldn’t ignore those revelations or I’d be living in delusion. The only choice I had, as far as I could see, was wading through the jumbled mess of my past and how it manifested in my present — in my work, marriage, family, and just about everything else I’ll spare you from reading about here.

The rest of my time in Rome, I still kept an open mind about meeting someone on the fly to interview. I spent a few extra minutes at restaurants or sitting in cafés, trying to get a read on whoever walked in the door. Honestly, I didn’t expect all that you just read, so I felt some pressure to stick with the teleprompter and give you the marriage secrets you’re looking for. But no one came.

Even as my plane departed, I looked at all the happy couples sitting within a few seats of me, to sense whether I could strike up a conversation. But then it occurred to me that I was just pushing, as I always have, to not fail at writing a great book.

Maybe I didn’t get a new, verifiable “secret,” but I did uncover the secret to take my own marriage from wonderful to extraordinary.

By the way, after Keith gave me a 7, I asked if he’d like his own score. He was rightfully nervous considering he’d just watched the blood drain out of my face with his off-the-cuff rating.

No one is perfect, and we all have work to do. Onward.

Are you brave enough to ask “If you were to grade me as a wife on a scale of 1 to 10, with 10 being highest, what would I score?” and ready to make changes to improve your marriage? Come join the conversation on our blog! We’d love to hear from you! 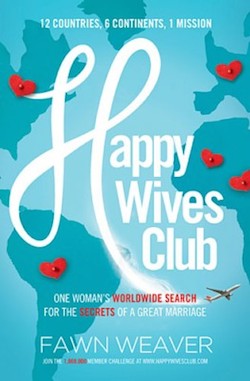