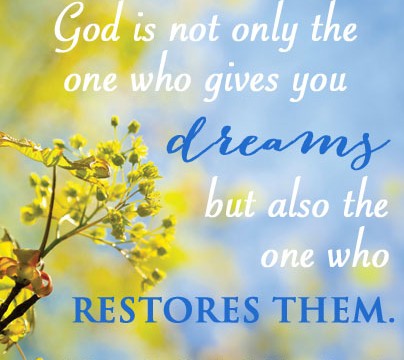 Editor’s Note: Pastor Matthew Barnett of the Dream Center in Los Angeles, CA, the first of 150 Dream Centers launched around the world, shares true stories and testimonies of people whose lives hit rock bottom in the new book God’s Dream for You. Through the guidance and direction at the Dream Center, millions have learned about the power and love of Jesus; these brave souls broke free from their bondage and now live brand-new lives. This book is a great resource of hope and inspiration for those who, whatever their situation, want to discover God’s dream for their life.

Most of the time, when a homeless family arrives on our Los Angeles campus, they’ve lost just about everything. They have their car, whatever they’ve been able to cram into it, and nothing much else except the clothes on their backs.

Someone on our staff takes them into a room and sits down with them. They’re expecting all of the usual questions they’d get from most social workers. Here we go again. Another person with another pen and another clipboard. I know the drill: “Name? Marital status? Children? Ages of children? Previous address? Previous employer? Previous occupation? Health status?” Etc., etc.

But we don’t do that kind of intake here. We have a different first question, and it almost always takes people by surprise.

What is your dream?

The question stuns them. Confuses them. Then often their eyes narrow a little with a flash of suspicion.

Is this a joke? Is this sarcasm? Is this person mocking me when I’m down? What is my dream? Are you kidding me? Coming here isn’t about dreaming! It’s about surviving. It’s about staying alive and keeping body and soul together. I didn’t show up on the front porch of a place like this because I’m chasing my dream. I’ve ended up here because I don’t have anywhere else to go. I want to keep my family together. I want to keep my marriage together. I want my hungry kids to be fed. I want to get off the streets! I don’t want to end up in prison like some people I know. I don’t want to live with abuse or threats. And I don’t have the energy any longer to fight the alcoholism, drug abuse, and the prostitution that are all around me.

But “What is your dream?” is no idle question. It pertains to life and death.

In Proverbs 29:18 we read: “Where there is no revelation [or vision], the people cast off restraint.”

In other words, without a dream, people don’t exercise self-control. When men and women have nothing to live for, they “cast off restraint.”

And we answer: “But what if we took survival off the table? While you’re here, you won’t have to worry about that. This is a safe, clean place, and we will give you the food and shelter you need. So let’s start thinking about your potential.”

The fact is, when you’ve been disappointed again and again, you become afraid to dream. After all, how could you bear another disappointment?

But in the power of Christ, you can begin to dream again.

Even in marriages, there comes a point where people lose hope. A husband and wife may be committed to staying together for the rest of their lives, but as they imagine the years ahead, it looks to them more like running an endurance test or slogging along on an endless marathon under gray, rainy skies. Life looks more like grim survival than anything else. The idea that they could ever thrive in their marriage seems so far out there that it doesn’t even seem real.

Asking people “What is your dream?” is almost like lifting them to a whole different plane. We’ve found that most people really do have something in their heart they would love to do or pursue, but they have suppressed that dream for so long that it doesn’t seem like a possibility at all. Maybe the dream is getting free of addiction. Maybe it’s finishing high school or going to college. Maybe it’s being trained for a certain occupation or specific career. The desire is still there, but it’s buried so deeply beneath their setbacks, pain, and loss that they’ve forgotten they ever had any aspirations.

But once we hear their dream, we tell them, “We’re going to help you get to your dream” — and they can hardly believe their ears. Maybe they expected to have to prove themselves first or completely clean up their life before we would start talking to them about their future.

This “What is your dream?” interaction is based on a concept that the Lord has impressed on us through the years as we’ve worked with people in crisis. We call it “belong and believe.”

In the Gospels, Jesus said to a number of men, “Come and follow Me,” and at that point these men were in no way ready to be disciples of Christ. They were just regular guys. Some of them fished for a living. Matthew had been a tax collector for the Romans, a traitor hated and resented by virtually everyone. But Jesus called each one of them, inviting them to be close to Him, to walk with Him, to get to know Him better, and to serve Him.

That’s what Jesus did, but that’s not what religion usually does. Instead religion will say, “When you believe what we believe, then we’ll let you belong and be involved in what we’re doing.” But Jesus allowed people to belong first, to see what He was doing, find themselves drawn to Him, and then believe.

I love how the apostle John captured this order of events in his gospel:

The next day John [the Baptist] was there again with two of his disciples. When he saw Jesus passing by, he said, “Look, the Lamb of God!” When the two disciples heard him say this, they followed Jesus. Turning around, Jesus saw them following and asked, “What do you want?” They said, “Rabbi” (which means “Teacher”), “where are you staying?” “Come,” he replied, “and you will see.” So they went and saw where he was staying, and they spent that day with him. It was about four in the afternoon. (John 1:35–39)

Jesus allowed people to belong first, before they believed.

Then, as they walked with Him, they began to believe. For some of them, coming to faith in Jesus took a long time. Two disciples didn’t believe until after the resurrection when Jesus directly confronted them and said, “How foolish you are, and how slow to believe all that the prophets have spoken!” (Luke 24:25). He didn’t justify their lack of belief or make excuses for their behavior while they were learning, but He allowed them to belong in order to believe.

They didn’t have to clean up their lives first.

And then, maybe sooner, maybe later, as men and women see Christ and His followers up close, they realize that God Himself has a dream for their lives. Belonging encourages believing.

That’s why people in crisis who come through our doors are so surprised to have us ask them, “What is your dream?” Their dreams have been overshadowed by their disappointments and sorrows for so long that they may have forgotten they ever had any.

But the Lord doesn’t forget anything. As you ask God to reveal His dream for your life, He may first have to roll up His sleeves and help you work through some interwoven layers of heartbreak that have hidden His desire and purpose for your life.

Starting on September 8th and ending on September 9th 2013, Matthew Barnett will embark on a 24-hour day of service event called #serve24. During this event, 19 Dream Centers nationwide will join him in serving others for 24-hours straight in order to exemplify the message in Matthew’s new book, God’s Dream for You:  when we give to others and serve those around us, we become vessels for God to reveal His ultimate dream for our lives. Learn how you can get involved…

What about you? What is your dream? Maybe because of your circumstances you don’t even know you have a dream. Or maybe you’ve forgotten it in a small, dark corner of your heart . Maybe you’ve worried that reencountering your hidden pain would be too much for you. Or that it just isn’t relevant anymore. Maybe you’re just surviving. As Matthew suggested, take time to to ask God to show you His dream for you. In the power of Christ, you can begin to dream again! We would love to hear from you. Please share with us by commenting on our blog! ~ Devotionals Daily 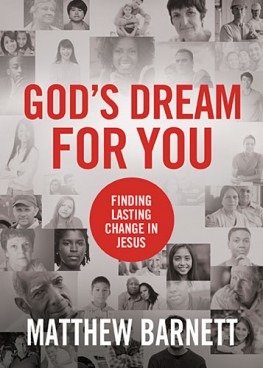