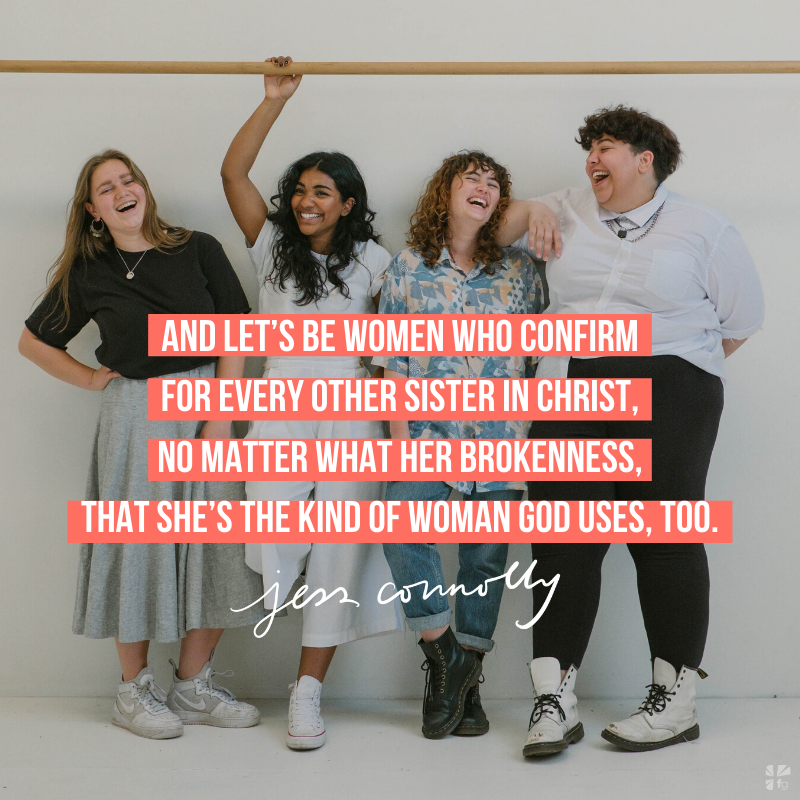 Editor’s note: The following excerpt is from one of our favorite books of this past year. It is powerfully insightful, it is fun and inspirational, and it is filled with heart-pumping Hope. You Are the Girl for the Job by Jess Connolly will spur you on in the belief of the most foundational truth – you are who God says you are. The title is not an empty catchphrase, and it’s not even a statement about your capacity, but rather His.

If you’ve been around the church for a while or read the Bible, this probably doesn’t surprise you. Maybe you’ve grown used to Jesus picking the least likely, or maybe even His radical grace has grown stale in your heart. You know that this is what He does: makes broken things beautiful again and again and again. Takes the weak and makes them strong, blah blah blah. Sister, can you go take a lap around your house or do a headstand or something? I need you to shake it up and remember that this is not normal.

In our churches and faith communities today, we can’t relate to this. The most busted and broken people of the group do not get chosen to lead the whole shebang. Most of us have lost the strength to believe He can actually heal the messiest stories. The woman in our church who just might have seven demons messing with her? For most of our churches, she’s too disruptive. We draw boundaries with her and don’t invite her to our coffee dates. We certainly don’t ask her to lead.

Maybe we need a quick shake in order to remember that when the transformative power of Jesus Christ meets painfully dark and heavy brokenness, He doesn’t just slightly clean it up. He doesn’t merely do some tidying. He doesn’t sweep the grossest stuff under the rug. And He never, ever passes by brokenness in order to play with the more manageable kids on the playground.

This is an important moment, as we’re beginning to believe and apply the truth that Jesus has called us to be the girls for the job. Can we pause and check whether or not we believe that truth applies to those who are most entrenched in sin, affliction, suffering — who are the most downtrodden amongst us? Do we believe that when His grace and glory meet their neediness, they are also the girls for the job? And will we be the ones to tell them that?

Now, for those of you who feel like Mary before Jesus got his hands on those demons, I’ve got a word.

First: there is no doubt in my mind that you’re the girl for the job. There is no doubt in my mind that you’ve gotten this book on purpose. I believe someone prayed it into your hands or gave it to you intentionally. No matter when in the future you’re reading this, I am praying right now as I write that the God of the Universe will orchestrate you having it on the day you most need it, the day you least believe that He loves you and wants to use you.

I want you to know that I’ve been the girl who can’t stop crying in the back row at church. I’ve been the one ostracized for being honest about what afflicts me. I’ve had leaders of small groups call my husband and say, “I know you’re going through a rough time, but if Jessi can’t stop crying during group, it might be better if she doesn’t come. It’s bringing the group down, and it’s reflecting poorly on you as a husband.” I’ve been the one grieving, the one struggling with depression. I’ve been the one with the sick kid, the one with the autoimmune disease that will never leave. And I might not know your exact situation — what keeps you feeling like you’re too much for humans and too broken for God to use you — but I know that His capacity plus our willingness always equals abundance. I do not think you’re the exception….

But I do know the kind of woman Mary was, and I do know the kind of women Jesus loves to use for His glory and their good, and I know where our power comes from. Can we pause now and ask God for a new way, a new strength, a new system to be energized for what’s ahead? One that isn’t based on our accolades or empowering phrases that pump us up? Can we ask God for real, unending, Spirit- filled power from on high that comes only when we let His light invade our darkness over and over and over again? Can we trust our friend Jesus, and let Him see where we’re coming from and what we’re working with — even the parts of our hearts and lives that we’ve hidden from the rest of the world?

Let’s confirm, aided by the Word of God and the Spirit of Truth, that we’re the kind of women God uses because we’re open and eager to have His healing meet our brokenness. Let’s confirm, once again, that we are the girls for the job, not because of the successes of our past but because of the strength of His saving grace. And let’s be women who confirm for every other sister in Christ, no matter what her brokenness, that she’s the kind of woman God uses, too.

Excerpted with permission from You Are the Girl for the Job by Jess Connolly, copyright Jessica Ashleigh Connolly

Mary Magdalene’s life and relationship to Jesus is an excellent example of just how powerful His grace is. The lengths it will go. Everything we can’t understand about His limitless capacity to love and forgive us. And, honestly, the mind-boggling fact that He is proud to be seen with us. When thinking about what lies ahead for the world or for you as a Christian, how are you asking Him to help prepare you to move forward?