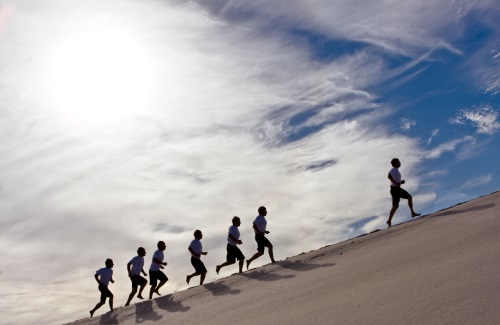 What makes a leader?

Is leadership automatically bestowed by a box on the organizational chart? Where do position and power figure into the formula for leadership? And what is the ideal model for leaders? Is it the corporate CEO? The military commander? The head of state?

Jesus answered all those questions in a few words. His views on leadership are conspicuously out of step with the conventional wisdom of our age:

You know that the rulers of the Gentiles lord it over them, and those who are great exercise authority over them. Yet it shall not be so among you; but whoever desires to become great among you, let him be your servant. And whoever desires to be first among you, let him be your slave— just as the Son of Man did not come to be served, but to serve, and to give His life a ransom for many (Matthew 20:25–28).

According to Christ, then, the truest kind of leadership demands service, sacrifice, and selflessness. A proud and self-promoting person is not a good leader by Christ’s standard, regardless of how much clout he or she might wield. Leaders who look to Christ as their Leader and their supreme model of leadership will have servants’ hearts. They will exemplify sacrifice.

I realize those are not characteristics most people associate with leadership, but they are essential qualities of a biblical approach to leadership, which is the only kind I’m interested in.

There’s a crucial reason for this: Leadership for the Christian always has a spiritual dimension. The duty of leading people carries with it certain spiritual obligations. That is as true for the Christian president of a secular company as it is for the stay-at-home mom whose sphere of leadership might extend no further than her own children.

All Christians in every kind of leadership are called to be spiritual leaders. Every leader who is also a Christian—including the manager of the widget factory, the football coach, and the public-school kindergarten teacher—needs to remember that the leadership role is a spiritual responsibility, and the people we lead are a stewardship from God, for which we will one day be called to give an account (Matthew 25:14–30).

If you truly understand your accountability before God as a leader, you can begin to see why Christ portrayed the leader as a servant. He was not suggesting, as many have supposed, that lowliness alone is the essence of leadership. There are plenty of humble, meek, tenderhearted, servantminded people who are not leaders. A true leader inspires followers.

Someone who has no followers can hardly be called a leader.

To put it simply, leadership is influence. The ideal leader is someone whose life and character motivate people to follow. The best kind of leadership derives its authority first from the force of a righteous example, and not merely from the power of prestige, personality, or position. By contrast, much of the world’s “leadership” is nothing but manipulation of people by threats and rewards. That is not true leadership; it’s exploitation. Real leadership seeks to motivate people from the inside, by an appeal to the heart, not by external pressure and coercion.

Paul was a dynamic leader, even when being carried about in chains. He influenced people primarily through the force of his words. Evidently, his physical appearance was anything but powerful (2 Corinthians 10:1).

All were men of action, and all used their diverse gifts in markedly different ways. Their leadership styles were varied and diverse. But all were true leaders.

Again, I think it’s a serious mistake for Christians in leadership to pass over these biblical examples of leadership and turn instead to secular models of leadership in pursuit of style-obsessed formulae they think will make them better leaders. Yet entire organizations now exist to train church leaders with leadership techniques and management styles gleaned from worldly “experts.”

… Is authentic leadership merely a matter of technique? Can this approach of mimicking whatever is currently fashionable in secular management theory possibly be reconciled with Jesus’ statement that His kingdom operates by a markedly different style of leadership from “the rulers of the Gentiles”?

Of course it can’t. It is a serious mistake for Christians in positions of leadership to be more concerned with what is currently popular in the corporate world than with what our Lord taught about leadership. I’m convinced that the leadership principles He taught are essential to authentic success in both spiritual and secular realms.

And just because a leadership technique seems to “work” effectively in a corporate or political environment doesn’t mean it ought to be embraced uncritically by Christians.

In other words, you don’t become a spiritual leader by studying the techniques of corporate CEOs. You can’t exemplify biblical leadership and follow the trends of Madison Avenue at the same time.

There’s much more to Christlike leadership than modus operandi. Again, true spiritual leadership is all about character, not style.