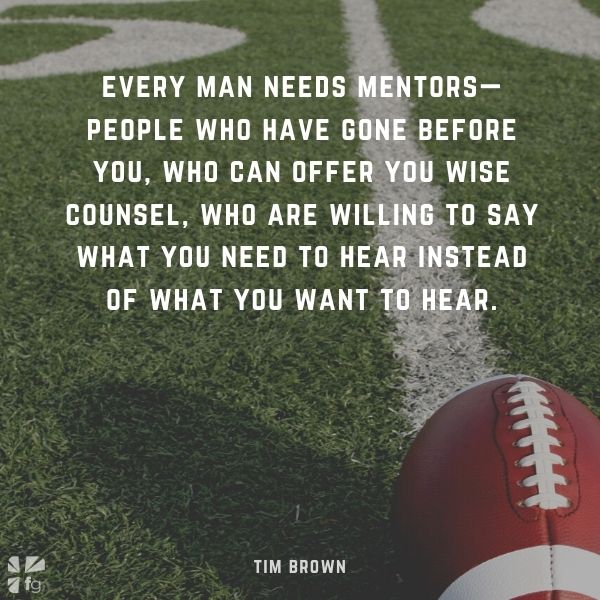 Editor’s note: Tim Brown was a star wide receiver for the Oakland Raiders in the NFL. He stood against the trials and temptations of life as a star athlete and came out the other side with his integrity intact. In his book and small group Bible study, The Making of a Man: How Men and Boys Honor God and Live with Integrity, he shares his testimony and establishes several principles for what it takes to lead in the home and workplace as a godly man. We hope you enjoy watching this free session 1 introduction to the study.

The Making of a Man

How do you make a man?

You could say that I’ve been trying to answer that question all my life.  Every young boy dreams about growing up and becoming his vision of a man. To a boy, a man is probably a leader and a hero. He might be an astronaut, a cowboy, a soldier, a firefighter, or yes, a football player. He might also be a husband and father.

When I was a boy, I imagined myself standing in a pulpit, delivering a stirring message as a preacher. That’s not every young boy’s idea of a man, but it was mine. But what is manhood, really? How do us guys get there – and how do we know when we’ve arrived?

Watch the Session 1 Video of The Making of a Man

Watch the video for session one. Use the outline provided to not any thoughts or concepts that stand out to you.

Tim Brown points out that we men are on a journey to understand what we need to do to make ourselves into the men that God wants each of us to be. Our search for understanding manhood begins early in life. As boys, we received ideas from a variety of sources: television, movies, books, sports figures, and, of course, our dads. Sometimes, we learned what we didn’t want to become by watching men. Most of us can identify a man—in real-life or someone whom we learned about — who stood out, who impressed us, and whom we wanted to be like.

Because we are all human and made in God’s image, we all have a longing for fulfillment and to find a purpose that can carry us through the ups and downs of life. We all want love and respect and to be treated fairly by others. We all feel emotions: sadness when something valuable is lost; angry when we are blocked from some- thing we want; fearful when threatened; and happy when good things come our way. We also all have faculties of reason to help us solve problems and make good decisions. The same God who made us to have so much in common also made us to have differences. Other than twins, no two people have ever had the same genetic code; and even identical twins are never exactly alike in temperament, interests, and abilities. These differences among us don’t make one person better than another — in fact, quite the contrary, for they make us interdependent. When we recognize our differences as being God-given, it instills a sense of respect and of valuing one another.

Why is accurately knowing and faithfully using your God-given talents so important?

In what ways do you think your view of God affects how you use — or don’t use — your gifts? What makes a man a godly man? Come join the conversation on our blog! We would love to hear your comments!