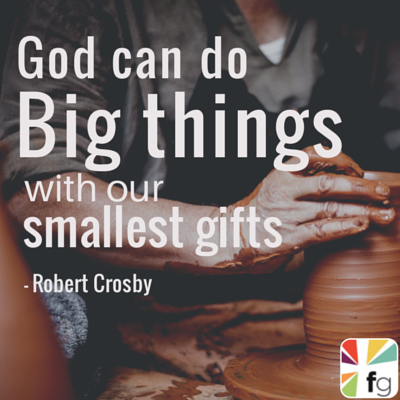 Amid a windfall of miracles and supernatural events among the Five Thousand, Jesus’ disciples seemed worried. While blinded eyes opened, lame legs walked, and deaf ears heard, the Twelve were concerned about another need: getting hungry.

Philip answered… “It would take more than half a year’s wages to buy enough bread for each one to have a bite!” Another of His disciples, Andrew, Simon Peter’s brother, spoke up, “Here is a boy with five small barley loaves and two small fish, but how far will they go among so many?” Jesus said, “Have the people sit down.” There was plenty of grass in that place, and they sat down (about five thousand men were there). Jesus then took the loaves, gave thanks, and distributed to those who were seated as much as they wanted.  – John 6:7-11

He did the same with the fish. The boy with the sack lunch during the feeding of the Five Thousand learned a secret almost everyone else in the group most certainly missed. The secret of surrender.

The moment this boy extended his hand and offered his lunch to Jesus, he took a step out of his own agenda and a step into Christ’s; his focus went from his selfish interests to Kingdom work.

While it appeared that he was giving something he needed most in that hour – namely, food – he was just about to gain something much greater. Here they were: the Five Thousand, freshly touched by God’s presence. Each one of them who had been sick was now healed. At that moment, they must have been the healthiest pack of people in Palestine. But there was one problem: now they were really hungry. And to make matters worse, they were way out in the wilderness. The nearest food markets were days away.

Imagine you were in that desperate place, feeling healthy but hungry. And you have something no one else in the Five Thousand has – lunch. Somehow among all the mothers in Palestine, yours had the foresight to prepare a sack lunch for you. What would you do? I know what I would have done. I would have probably slipped off to a private spot long enough to enjoy it. Or, at the most, shared it with my immediate family, making sure I had a bigger piece than did any of my siblings. Not this lad. He caught something before Jesus ever taught it, with words, that is. He learned the secret of surrender. This young man, like all the rest of the Five Thousand, had received from God. Maybe he was healed, as many of the rest of them were. As a matter of fact, I think that may be what motivated him to give his lunch to Jesus. It is doubtful that when he placed it in Jesus’ hands, he had any idea of what the Lord intended to do. For all he knew, he was offering Jesus one meal for himself. The Lord had ministered to (and probably healed) him. Now the least he could do was minister to (or serve) Jesus in some way.

That young man had the same thing you have to offer – what God has already given you, what He has placed in your hands – that and nothing more.

John’s telling of this story adds a bit to it. It shows that the challenge of feeding the Five Thousand was a big problem: “One of [Jesus’] disciples, Andrew, Simon Peter’s brother, said to Him, ‘There is a boy here who has five barley loaves and two fish, but what are they for so many?’ ” (John 6:8-9).

What’s in Your Hands?

When Moses in the Old Testament was at a loss over how he was going to serve God, God asked him a question: “What is that in your hand?” (Exodus 4:2). And what was in his hand was a staff, a simple walking stick. I am sure there was nothing especially appealing to the eye about that staff of Moses’. After all it was just a stick.

Before he placed it in God’s hands, he had used it through countless journeys in the desert, to prod off predators, to clear the path, and to steady his steps on rugged terrain. After Moses took his hands off it and gave it to God, it was used to lead Moses off his path and back onto God’s, to fight and devour the serpents of sorcerers, to lead God’s people out of bondage, to part and pave a pathway through an ocean, and to draw water out of a rock. As Moses’ stick, it was ordinary; as the rod of God, it was truly extraordinary. It is interesting to me the Lord chose to use that young lad’s lunch.

We know from reading the Bible that God can make something out of nothing.

He made the Heavens and the earth by the power of His words. Whipping up a banquet for this bunch seems like child’s play compared to that. However, he chose not to make it out of nothing or even to speak it into existence. No, He wanted to take what was in this young man’s hands and bless it, even multiply it.

What about you? What do you have in your hands? What has God given you to use for His glory? Give it back to Him. Present it to Him intentionally. Place it in His hands even now and you will no longer just have a possession. You will have a ministry. You may say, “But I don’t think I have anything that can be used for a ministry.” Are you sure? Consider this:

When we use our time, talents, gifts, skills, and interests to serve others, God has a way of multiplying the impact and influence of these things many times over.

And when we use them they draw us farther out of the Crowds and alongside Jesus to serve the Crowds and individuals yet waiting to encounter God’s love. Remember… in the Five Thousand, we find God can do big things even with our smallest gifts.

Watch The One Jesus Loves Video

Excerpted with permission from The One Jesus Loves by Robert Crosby, copyright Thomas Nelson, 2014.

Today, let’s step into sack lunch spirituality! What do you have in your hands? What gifts and talents has God given you? Maybe you feel like the things that you are good at or interested in are small, insignificant, or that they don’t matter, or couldn’t matter for the Kingdom of God. Surrender them anyway! Let God use whatever you’ve got and watch Him multiply it beyond your wildest imagination! Come join the conversation on our blog! We would love to hear from you! ~ Devotionals Daily