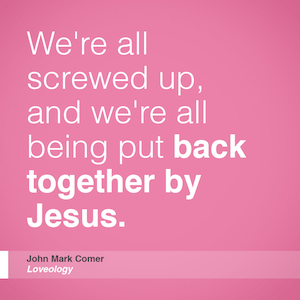 Genesis 2 ends with, “Adam and his wife were both naked, and they felt no shame.”

Two humans, wrapped up in a relationship for life, centered around friendship, gardening, sexuality, and family. It was beautiful. And short-lived.

Oh, how I wish Genesis 2 were the end of the story. Life would be so much easier. But there’s no getting around Genesis 3.

In the following story, Eve is tempted by the serpent. She’s called to rule over the creation, but instead she’s ruled by the creation. It’s a sad turn of events — an upending of the created order.

The first place sin wreaks havoc is in Adam and Eve’s relationship.

God says to Adam, “Have you eaten from the tree that I commanded you not to eat from?”

Adam fires back, “The woman you put here with me — she gave me some fruit from the tree.” Nice. Not only does he sound like a six-year-old, but he blames it all on his wife.

Eve goes on the defensive. “The serpent deceived me.”

And just like that, the first marriage is infected by the disease.

And we are the sons of Adam and the daughters of Eve. We live in the wake of our first parents’ misstep. Because we are just as screwed up as they were, all marriages face tension. Some more than others, but nobody is immune. We all suffer from the garden tragedy.

But there’s good news. Jesus’ agenda is to fix it. All of it.

The New Testament is filled with language that echoes Genesis 1 and 2. Take The Gospel of John. The opening line is, “In the beginning was the Word… Through him all things were made.” John is retelling the story of creation. He’s saying that a new creation is coming to birth in and through “the Word” — his name for Jesus. To John, the gospel is about the re-creation. Of what? Everything.

I think of Paul’s letter to the church in Colossae. “God was pleased to have all his fullness dwell in him [Jesus], and through him to reconcile to himself all things, whether things on earth or things in heaven, by making peace through his blood, shed on the cross.” Wow. I need to catch my breath after reading that.

God is going to put the whole cosmos back into the shape He intended “in the beginning,” and here’s the salient point — He’s starting with you and me.

There’s a line in Paul’s letter to the Jesus followers in Corinth in which he writes, “If anyone is in Christ, the new creation has come: The old has gone, the new is here!”

If you’re a follower of Jesus, then you are a new creation.

You don’t live in the garden anymore, true. You were made in the image of God, and sin fractured that image, but it’s still there. Latent in your humanity. And the Spirit of Jesus is at work in your life. He’s re-creating you from the ground up.

But keep in mind that creation is a process, not an item on a to-do list. And the creative process takes time. A lot of time. What you and I call “the creative process,” theologians call “sanctification.” Don’t get scared off by the technical jargon. To be sanctified means “to be set apart” from the ugly, distorted human you used to be and remade into the real you.

Get that. The real you.

To God, your identity — what makes you you — isn’t rooted in the past (who you were) or in the present (who you are), but in the future — in who you are becoming.

That’s why Paul can say things like, “You are holy.” In fact, the New Testament writings call you by all kinds of lofty language — holy, dearly loved, pure, blameless, chosen, children of God, co-heirs with Messiah Jesus, etc.

In theology this is called “eschatological realism,” which is a way of saying you are in the process of becoming who you really are.

You are “holy,” and you are in the process of becoming holy.

You are “pure,” and you are in the process of becoming pure.

You are “blameless” (or without defect), and you are in the process of becoming blameless.

God starts with the end in mind and works backward, kind of like reverse engineering. I think of Paul’s language to the church in Ephesus. “Live a life worthy of the calling you have received.” Put another way, “This is who you are. Now live up to it.”

What does this have to do with marriage? A lot.

For starters, it blows up the idea of “the one.” The long-standing urban legend that there is a mythical creature out there somewhere (probably next to a unicorn) who was made to “complete” you. Your “missing half.” Is that true? Let’s put this question to bed once and for all.

This idea doesn’t come from the Scriptures, not even close. It comes from Greek mythology, specifically from an ancient writing by Plato called the Symposium.

According to Plato, humans were originally androgynous, each one with four arms, four legs, two sets of genitalia (male and female), and one head made up of two faces.

Picture that. Sounds like something out of a film by Guillermo del Toro.

In reality, marriage is two broken people coming together to find healing in Jesus.

And one broken person plus another broken person does not equal bliss! The math adds up in the opposite direction — twice as much brokenness.

And guess what? That’s a good thing. Because the friction in a marriage exposes all the places where God is still at work in us. That’s a gift. Not only that, but in the wake of the fall, that’s one of the reasons for marriage — re-creation.

Don’t get married because you think he or she is “the one.” Trust me, they’re not. There’s no such thing! But do get married when you see who God is making somebody to be, and it lights you up. When you want to be a part of that story of transformation. That journey to the future. When you are well aware it will be a long and bumpy ride, but you don’t want to miss one mile. Because you believe in God’s calling on them, and you want in.

Marriage is humbling. I thought I was a pretty decent guy — and then I got married.

Turns out I’m kind of a toolshed. It’s easy to be a decent guy when you live in a bubble. But when you step into marriage, your true colors bleed out. It’s like squeezing a sponge. Whatever is on the inside comes out, for better or for worse.

If there are serious problems in your life, don’t expect them to go away when you get married. Usually they get worse.

My wife Tammy sees the real me. The future me, the John Mark I am becoming. And she, like my community, and like my God, calls me forward into that reality. And I’d like to think I do the same for her. Because I believe in her, and in who God is making her to be.

We help each other become our real, true selves.

Tammy is a guardrail, a yellow line in the middle of my windshield, a signpost pointing forward to my destination. It’s not a smooth or straight road, but there’s no way I’m going back.

Well, that’s the gist of it.

That’s why you get married. That’s why God created marriage. And in the wake of the fall, a fifth reason is added — re-creation.

Does this post strike a nerve for you as it does for me? Blame shifting. Obstinate hearts. Anger. Distance. Regret. No more Eden. If you’re married, you undoubtedly relate with the comment that marriage is two broken people coming together to find healing in Jesus. If you’re a single person, have you been waiting for “the one”? What’s your response to the biblical understanding that there is no particular “one” for you? Come join the conversation on our blog! We would love to hear your story of being in the process of being fixed by Jesus! ~ Devotionals Daily 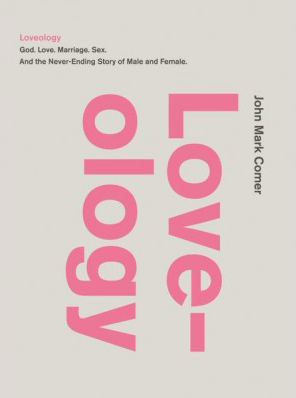