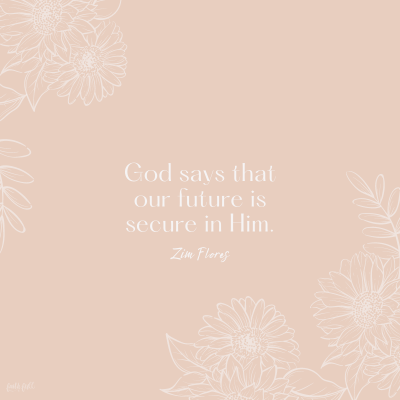 Many are the afflictions of the righteous, but the Lord delivers him out of them all. — Psalm 34:19

The sun peered between the trees and slowly emerged from behind the mountains. It was a cool, silent morning, and I was alone. The mist, suspended over the open valley below, was a nagging reminder of the weighty burden I carried. While the setting was idyllic, I was in deep turmoil. No amount of time in the wilderness seemed to help. I ran to the farthest corners of the earth to run away from life as I knew it — again. Even as grief enveloped me within the walls of a small, twelfth-century monastery in Umbria, Italy, a cold stone bench near my room’s window became my refuge. Umbria, centrally located along Tuscany’s border, was where I folded open the pages of the Bible, rummaging for comfort between the lines, begging for God to meet me in the middle of my mess. I rose early every morning in search of hope. I slept when my thoughts overwhelmed me.

A few days earlier, I had boarded a one-way flight to Rome in the hopes of escaping my new reality. And just before that? I made a decision that would change the trajectory of my life for- ever, and everything that I had worked toward building had suddenly shifted when crisis came knocking.

I had grown comfortable in my role as the founder of a fast-growing travel startup. We were the darlings of the travel industry, having built an unconventional movement by focusing on an unsuspecting audience: Black travelers.

But over the course of one summer, my life grew more and more unrecognizable. My then-boyfriend (now my husband) and I had taken a seven-week break to consecrate ourselves to the Lord.

I experienced one of the worst business launches in the history of my company.

And eventually I stopped leaving my apartment.

It all culminated in a bold decision — a ball that God threw in my court. It was time to let my company go. I spent hours with my pastors trying to make sense of what was happening I had wildly vivid dreams. Yet everything in my life that could break began to crumble as I experienced spiritual formation.

When God brought me to this inflection point, I didn’t know how much my destiny would depend on my next critical decision.

And let me just say, I’ve been crippled by decision-making throughout my life. In fact, if I could ban it into the galaxy somewhere, and my only decision would be whether I wanted milk in my tea or not, I would. I would rather not make any decision at all, let alone a tough one.

But when a crisis came knocking, I had a decision to make. It was time to trust God and lean in to the spiritual formation. And so I left home to spend time in a monastery, allowing myself to be broken open.

Have you ever considered that God wants more for you than you want for yourself?

I want to introduce you to a woman named Abigail. By all modern standards, Abigail was successful. Her husband Nabal was a wealthy sheepherder in Judah, housing thousands of sheep and goats. One could assume that aside from the fact that Nabal was a particularly rude man, Abigail lived a comfortable life. It may even have been a life that many other wives throughout the region would have pictured as the epitome of success — at least from the outside looking in.

David, born a shepherd and anointed to be the future king of Israel, had been on the run from King Saul with a vagabond crew. When David found out that Nabal had sheared his own sheep, he sent ten of his young men to ask for a gift to not only mark the occasion of the time but also because David’s presence in the area meant that Nabal’s flocks were protected.

However, instead of offering a grateful welcome, Nabal flung insult after insult at them — an offense so great that David decided to repay it with blood. When Abigail discovered David’s plan for her husband, she quietly sent ahead food and drinks, effectively thwarting a potential massacre. When it came time to act, Abigail didn’t bury her identity in the life she lived; she nailed it to the promise of a greater future.

When crisis comes knocking, we have two options: we can either shrink in fear, afraid that we’ll lose, or we can make the crucial decision that will propel us into the future.

Making a decision during a time of deep turmoil or grief can feel excruciating. On top of learning to function in the midst of a challenging time, making a life-altering decision adds to the pressure. Should I stay? Should I leave? Should I hold on? Should I let go?

Abigail made a decision. She chose her future. When her husband died roughly ten days later, she went from living a financially comfortable life to one on the run as David’s new bride. I wonder what would have happened if she chose to stay.

Like Abigail, we can do powerful things in Christ when we take on His identity at the crossroad. As difficult as it may be, we can always trust that His plans are greater than our crises. Why? When a crisis comes, it can rob us of our joy, our plans, and we often think that it can rob us of our future. But I’ve got good news:

God says that our future is secure in Him.

Maybe you’ve lost your job or know you need to leave one. Maybe you received a bleak diagnosis. Perhaps you’ve been betrayed by friends. Or maybe you’re experiencing a deep divide within your family.

Has a crisis taken your life on an unexpected turn? Did your comfortable path turn into something unrecognizable? Are you struggling to see how God could allow this to happen to you?

Because He is an omniscient God, His version of better is superior to ours. He sees the bigger picture and the complete plan. He holds our todays and tomorrows in the palm of His hand, constantly guiding us toward truth. I may be limited in how I perceive the world, but God isn’t. When we truly rest in His sovereignty, we allow the indecision of the crossroad to melt away.

We can do powerful things in Christ when we take on His identity in the middle of a crisis. The comfort we seek is found once we acknowledge that the same God who brought us to this very moment will equip us with the boldness to make it to the other side.

Zimism ~ Success by our standards rarely aligns with God’s measure of success.

Excerpted with permission from Dare to Bloom by Zim Flores, copyright Zimuzor Flores.

Looking at the questions above, I’m betting that most of us faced a crises or two in 2020, right? Did you make it through? Did God change your direction? Are you still in it? Come share with us. We want to hear how you are doing! ~ Laurie McClure, Faith.Full