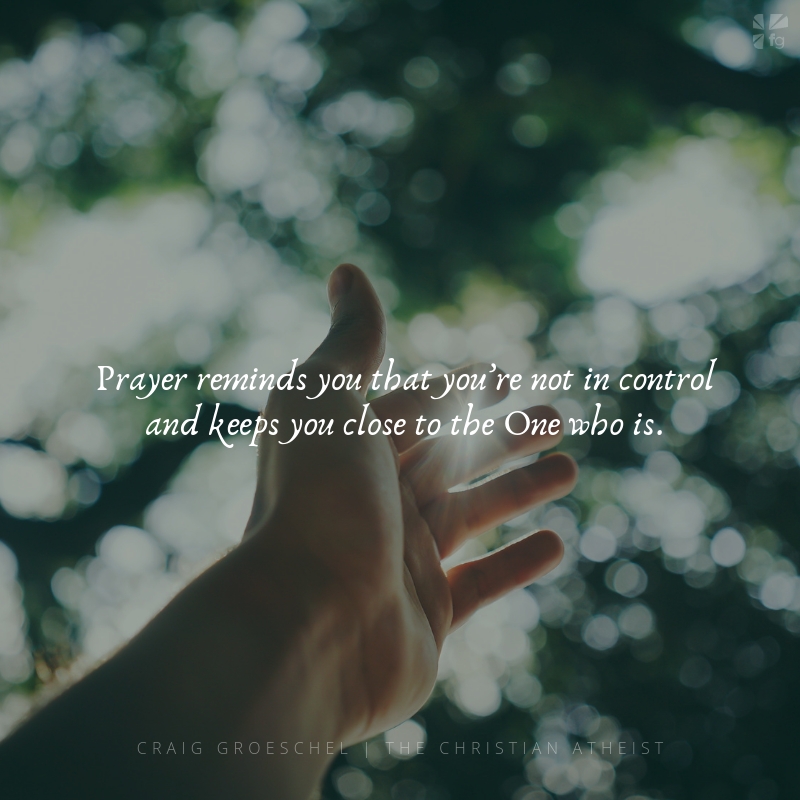 A pastor once asked his church to pray that God would shut down a neighborhood bar. The whole church gathered for an evening prayer meeting, pleading with God to rid the neighborhood of the evils of this bar. A few weeks later, lightning struck the bar and it burned to the ground.

Having heard about the church’s prayer crusade, the bar owner promptly sued the church. When the court date finally arrived, the bar owner passionately argued that God struck his bar with lightning because of the church members’ prayers. The pastor backtracked, brushing off the accusations. He admitted the church prayed, but he also affirmed that no one in his congregation really expected anything to happen.

The judge leaned back in his chair, a mix of amusement and perplexity on his face. Finally he spoke: “I can’t believe what I’m hearing. Right in front of me is a bar owner who believes in the power of prayer and a pastor who doesn’t.”

The truth is some Christian Atheists believe in God, but they don’t believe in prayer.

They might claim to believe prayer works, but their actions say otherwise. Some rarely pray, and when they do, they don’t expect anything to change.

For years, that described me.

My admission might surprise you, since I’m a pastor, but I’ve never been good at praying. Prayer has always intimidated me, and prayer meetings used to rank just above septic tank maintenance on my list of least favorite responsibilities. I can trace my aversion to prayer meetings all the way back to college. My roommate Todd loved to pray… and pray… and pray. For Todd, the longer the prayers, the better.

Several nights a week, Todd would invite people over for his infamously long prayer meetings. Everyone who really loved God came, of course, while those who didn’t kept their distance. I was caught in the middle: I loved God, but I despised those marathon prayer meetings. Without fail, the faithful would sit cross-legged in a circle and pray. For hours. Sometimes I’d get so bored I’d doze off. (Good thing I had those amens stored up.)

The people who prayed were nice enough, but the whole hand-holding thing drove me crazy. When the petitions and pleas would gain momentum, and the meeting started to heat up, some spiritual warriors displayed their fervor by tightening their grip, tighter — Amen, Lord! — and tighter — Hallelujah! — and tighter. Many times it was my hand that was getting squeezed, and if I had forgotten to take off my sweet 1980s gold-nugget ring, it would dig into my other fingers and leave nugget-shaped craters. (You’d whine too if you’d gotten the squeeze.) Once when I asked a guy not to squeeze my hand so hard, he reminded me that Jesus suffered for me, so I shouldn’t complain.

Hand-squeezers bothered me a lot, but not nearly as much as sweaters. No, I’m not talking about cardigans and pullovers. I mean people who sweat. A lot. There’s just something wrong about seeking God while holding a slimy hand that wants to slip out of your grip like a slippery fish.

So you can see why I was never that into prayer. I’ve always felt insecure praying out loud. I’ve never thought my prayers were long enough, eloquent enough, or powerful enough. While some people’s prayers — like my roommate Todd’s prayers — sound fluid and effortless, mine sound more like a first grader praying for a sick hamster. If prayer were a sport and we were picking teams, let’s just say I’d be the last guy picked.

I know I’m not the only one who wasn’t into prayer. Many Christian Atheists create long lists of reasons not to pray, from feeling we’re not good enough at it, to being bored when we do pray; from not wanting to bother God with our small requests, to not thinking our prayers can actually make a difference. While these may seem like giant hurdles we can’t get over, we can. I’ve personally stared each of these prayer obstacles in the face. And one by one, over time, God has changed my heart and my attitude toward prayer. Rather than viewing prayer as a mostly boring, often ineffective ritual, prayer has become the heartbeat of all I do. It can for you too.

If you’re not there yet, don’t worry. We have to start somewhere. Many of us fear that we aren’t good enough, eloquent enough, or passionate enough. Instead of trying and failing, we don’t try at all. We forget that God loves the prayers of imperfect people, people who know they’ve done wrong, who know they are helpless on their own, who reach out to God, who know they need him.

Or sometimes prayer simply bores us. Our minds wander. In the middle of a conversation with the Creator of the universe, I sometimes remember that I haven’t shaved the back of my neck in over a week or that we’re running low on toilet paper. Once I’m bored and distracted, I feel so guilty I don’t want to keep praying.

Admittedly, when prayer becomes an empty, meaningless ritual, it is boring. But when you remember who you’re talking to — when you acknowledge that the God of the universe is honestly, truly excited to hear from you — that truth alone will change your attitude toward prayer. Move the focus from yourself onto God. That’s the beginning of making prayer fresh and exciting. Even fun. Then prayer is like talking to a close friend with whom you can share your heart, your fears, and your dreams. Then, suddenly, instead of a lifeless one-way conversation, prayer with the Father becomes exhilarating.

One more excuse for avoiding prayer — and this is the deal-breaker for most of us Christian Atheists — is that we just aren’t sure our prayers will make a difference. We’ve tried praying before and nothing seemed to happen.

After several failed attempts, praying seems at best ineffective and at worse a waste of time.

But God is moved by your prayers. When you pray and God specifically answers your prayers, you will never be the same again. I know my kids won’t after what God did. For years, my kids begged me for a dog. After their cute faces and adorable voices finally wore me down, I agreed that if God wanted us to have a dog, he could show us a good dog that needed a home, and I’d arrange it. That night, all six of my children prayed for the perfect dog. The next day as I arrived at our home in the country, my kids were jumping up and down celebrating. Evidently someone had dumped a puppy nearby, and she had wandered up to our house. God heard the prayers of a few children, about something as small as a puppy. (Which has now grown into a very large and adorable dog that recently ate my patio furniture.)

Pray about whatever is on your mind.

When you find out your grandfather has cancer, pray that God would heal him.

If your boss drives you crazy, talk to God about her.

If you have headaches, tell God when it hurts.

If your marriage is in bad shape, ask God to help.

If you are considering replacing an older car, ask God for wisdom.

Before starting on your term paper, pray for direction.

And if you don’t want a puppy, don’t let your kids pray.

But even when you don’t see the results of your prayers around you, you may still sense God’s loving presence as you grow to know Him. I’ve learned that any genuine communication to God may or may not change what God does, but your prayer will often change your heart or perspective.

Prayer reminds you that you’re not in control and keeps you close to the One who is.

Have you ever felt like not praying? Or that prayer was intimidating? Or boring? Or pointless? If not, you’re in the rare! If so, then we can have compassion on those who do feel that way now and pray for them! Let’s pray today and expect and believe! Come share your thoughts with us on our blog. We want to hear from you about keeping close to the One who is in control.