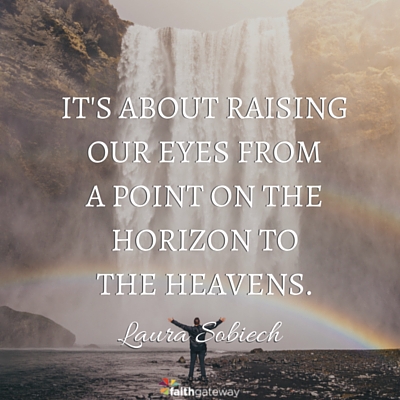 The house where I grew up was situated just a few yards from the railroad tracks that ran through my hometown. The loud rumbling and the click, clack of the racing train made the whole house shake. I remember waking up to the blaring horn and the deep rumble that reached all the way through my body as the six o’clock train would roll by.

In the days that followed the devastating news that Zach was terminal, I would wake up in the morning and, for a few seconds, feel the peace and contentment of our home. But it didn’t take long for the rumbling to start. I would first feel it in my chest, then it gradually made its way to my fingertips and toes. It felt like the six o’clock train from my childhood. The rumbling would gradually change over to tension as the nightmare I was waking up to would slowly enter back into my consciousness.

I relished those few moments at the beginning of each day, when sleep hadn’t quite given way to the new day, before I remembered what it was we would have to face. The moments before the rumbling would start.

I’d been through this kind of thing before, at different points in Zach’s battle. When we would get disappointing results, it was like being shoved from behind by a bully who lurked around the corner. We never knew which scan would hold bad news, and it always seemed to catch me a little off guard, and I’d have to pick myself back up from the blow.

I began to get used to it after a while, recovering from the enormous stress of the horrifically bad news. But there was always a physical response that faith and prayer couldn’t head off or take away. When bad things happen, your body responds: your heart rate goes up, your mouth tastes like metal, and you get very tired but have a hard time falling asleep. That’s just the way it is; you simply don’t have much control over it.

I remember early on in our battle, I had posted a message on our CaringBridge site about feeling this stress before going in for a thoracotomy. I noted that Zach was pretty nonchalant; he’d had the surgery before and knew what to expect and knew he could manage the pain. “Thoracotomies. Meh. They’re no big deal,” he would say.

But his sixteen-year-old-invincible-boy way of thinking didn’t allow him to see the bigger picture. He didn’t see the war, only the battle. I was more concerned about the results than the actual surgery. Was the new chemo working? Was it killing the cancer? If it wasn’t, then we were running out of ammunition, and that meant losing the war.

A woman who had read the post made a comment in our CaringBridge guest book implying that because I was feeling the stress of the situation, my faith was inferior and less genuine than Zach’s. I was furious! How dare she make that implication? I didn’t disagree that Zach was strong in his faith, but to suggest that mine was weak because I was stressed about my child dying seemed utterly ridiculous, and cruel. For Pete’s sake, Jesus was more than a little stressed when He was faced with death. Was my response that much different?

But her message caused me to reflect. Not so much on my faith — I had lived most of my life believing in a loving God who sent His Son to redeem us and show us the way to heaven — but on where to place my hope.

I had gotten messages from people through CaringBridge and from family and friends that they were fervently praying Zach would be cured. They had their hearts set on a miraculous healing that would glorify God, and they prayed daily for it. Their hope lay in the healing power of God.

I wasn’t so certain.

I knew God wanted us to pray for what our hearts desired, but I had witnessed others who had walked a similar path to ours and had placed all their hope in a physical cure. They spent all their energy praying for a miracle, and when their loved one still died, it left them with their faith shaken. They had been so convinced that if they had enough faith, they could move God to conform to their will.

I wanted desperately for Zach to be cured. I wanted him to have a future where he would graduate from high school, go to college, marry, and have children. But I struggled with praying for a miracle of physical healing because I wasn’t sure that was God’s plan for Zach. I believed that a person’s suffering is a powerful thing when it is united with Christ’s, and that it can become a powerful channel of God’s grace into the world. I knew God must have allowed cancer into our lives for a reason, though I wasn’t certain what it was.

I wrestled with what to pray for, and I wrestled with where to place my hope. I knew God was asking me to trust Him, but that meant giving up Zach. How could I do that? In my soul I still had to choose. Let God do it His way, or beg Him to do it my way.

Trust God or not. Place my hope in something higher. Or not.

So, there I was, at that moment in time. We had run out of chemotherapy. There was nothing left. Without a miracle, Zach would die within a year.

I sat, gliding slowly back and forth in the comfort of my favorite rocking chair. I had lulled babies to sleep and dreamed of their bright futures in this chair, and now I had to contemplate what it would be like to lose one. All the memories of years filled by the spirit of that beautiful boy swam in my mind and left my heart to ache like arms that clutched a weighty treasure for a long time. How could I let go of this son who brought so much joy into our lives and into our home?

How could God ask this sacrifice of Zach, who loved Him more and better in his short life than most who are given a lifetime? And how could He take Zach from Rob and me? We had done things the right way; we had done our best to live faithful lives by serving Him. Wasn’t that enough?

My heart was raw from the struggle.

I was tired and broken with tears streaming down my face.

And then, a scene I had contemplated hundreds of times as I had prayed the rosary over the years filled my mind. It was a vivid image of Jesus in the Garden of Gethsemane. He was kneeling and in agony. He turned His face to heaven and opened His mouth and prayed,

Father, if You are willing, remove this cup from Me. Nevertheless, not My will, but Yours, be done. — Luke 22:42

That’s when it hit me. Christ, in His most extreme suffering, had given us the perfect prayer.

The most loving and perfect being to walk the earth, God’s own Son, wrestled with God’s will, just as I had. He saw what was coming and asked to be spared. But He knew His Father’s will was greater than His own, and He surrendered His will to the Father.

So I took that prayer, and with all that was in me, every part of my being and from the very depths of my soul, I made it my own. As I sat there alone, I spoke to God.

At that moment, my soul was freed. I wasn’t in charge of this thing, and in the depths of my being, I truly understood the meaning of hope.

Hope is something much bigger than anything physical we may desire. It is about raising our eyes from a point on the horizon to the heavens and into eternity. And it’s about relying on God’s grace to do it, no matter what the cost.

Watch the Video for Fly a Little Higher

Excerpted with permission from Fly a Little Higher: How God Answered One Mom’s Prayer in a Big Way by Laura Sobiech, copyright Laura Ann Sobiech.

Psalm 147:11 says, “The LORD delights in those who fear Him, who put their hope in His unfailing love.” Have you wrestled with God about hope, wondered what that hope should produce, or struggled with the answers He gives that are so much different that we would have wanted? Come join the conversation on our blog. We want to hear from you about learning to surrender as Jesus did in the Garden on Gethsemane. ~ Devotionals Daily