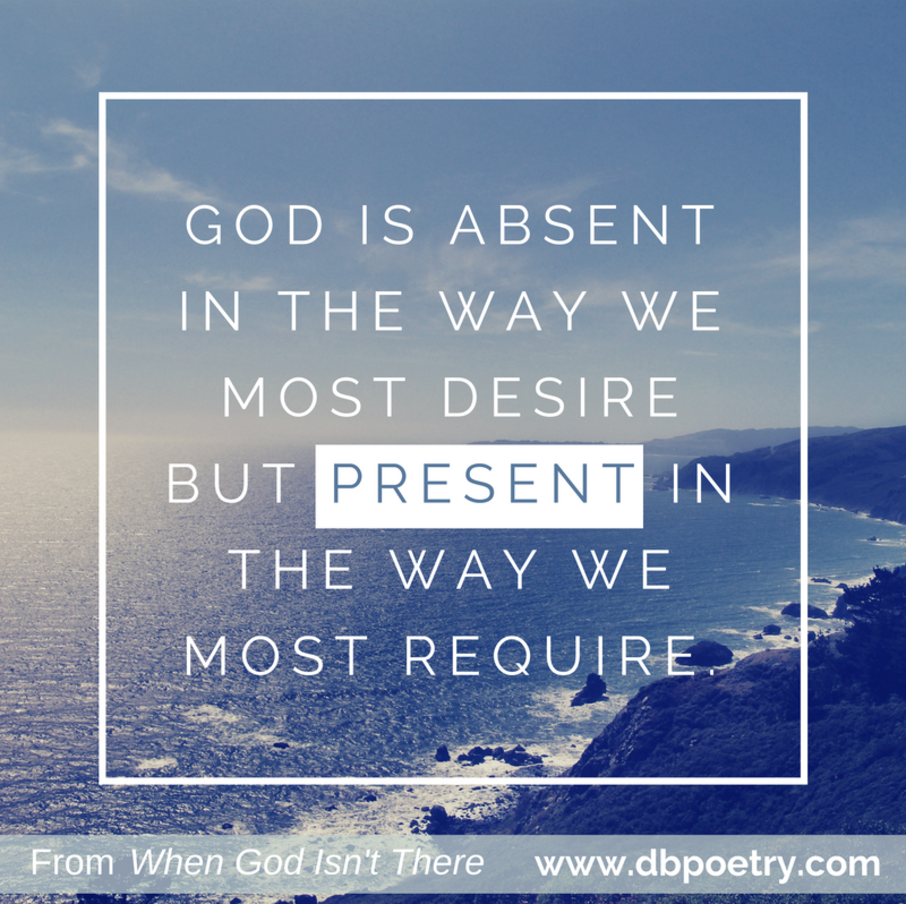 You have wrapped yourself with a cloud so that no prayer can pass through. — Lamentations 3:44

“I call, I cling, I want — and there is no One to answer… Where I try to raise my thoughts to Heaven — there is such convicting emptiness that those very thoughts return like sharp knives & hurt my very soul. — Love — the word — it brings nothing. — I am told God loves me — and yet the reality of darkness & coldness & emptiness is so great that nothing touches my soul.”1

These are the words of Mother Teresa.

Mother Teresa, originally named Gonxha Agnes Bojaxhiu, was born in 1910 and raised in a pious Catholic home in Macedonia. At eighteen, she joined the Sisters of Loreto and was given the name Sister Mary Teresa. The Dublin-based order of Loreto ran missions in India, and that is where Teresa was sent.

While on a train from Calcutta to Darjeeling, Mother Teresa said she heard the voice of Jesus telling her to leave her own religious order for the sake of serving the poor. So she moved to Calcutta. She helped the poor and the sick and was known for helping the terminally ill die with dignity, joy, and comfort.

But it was not just good deeds that drew the world’s attention to the poor Catholic nun — a nun serving the poor doesn’t usually make headlines. Mother Teresa garnered a special audience because of her way with words. She has been called the “poet laureate of the soul” and the “sound-bite saint.” Her writings have encouraged millions into a more radical service of Jesus.

So it was no surprise that some of her letters were released following her death in 1997. However, the world was shocked to discover the extreme struggle with doubt her letters revealed. For nearly fifty years, from 1948 till her death, Mother Teresa wrote privately as one in spiritual anguish, with only one month of relief in 1958.

Listen to a few of her other laments:

“I did not know that love could make one suffer so much… of pain human but caused by divine.”2

“The more I want Him — the less I am wanted. — I want to love Him as He has not been loved — and yet there is that separation —  that terrible emptiness, that feeling of absence of God.”3

Mother Teresa experienced the same desire as Moses — more wanted more. She was so in love with God that the absence of His actual and immediate presence was insufferable to her. A distance lay between her and God that some may see as closeness. But to a lover, even an inch of distance can seem like an infinite gap. An inch can feel like absence.

The more Mother Teresa loved God, the farther she felt from Him.

There is a great story of what it feels like to be far from God in the life of the prophet Jonah. As she told it, Mother Teresa was on a train when God spoke to her, but Scripture does not reveal what Jonah was doing when God came and audibly spoke to him.4 We can assume he was going about his normal life. However, this presence of God was far from normal. God revealed the presence of His voice to Jonah.

The prophet was chosen by God to take a message of repentance to the people of Nineveh, who were known for their violence and wickedness. Though a mighty call was now on his life, Jonah was fearful for his own safety and bitter that God would be willing to save such a wicked people. Nineveh, after all, was a horribly violent town — nicknamed “the city of blood.”5 Jonah wanted nothing to do with this call.

So Jonah did his best to flee from God. He quickly made his way to the sea, where he hired a boat bound in the opposite direction of God’s call. Jonah was now bound for a port city called Tarshish. He thought that putting distance between himself and the location where God showed up would put distance between his responsibility and the command of the Lord. Jonah was not only trying to escape the presence of God. He was trying to flee from the will of God.

The presence and will of God are inescapable.

This was Jonah’s first lesson regarding the presence and absence of God: we don’t get to decide when God is absent and when He is present. Only God can do that. When Jonah tried to run away from the location of God’s presence, he found his escape attempt as futile as trying to outrun the air. You may think that you have put too much distance between yourself and God over the years, but that is impossible. There is nowhere you can flee where God is not already present.6

Neither the presence nor the command of God can be escaped by any swiftness of the legs, any distance of the sea, or in any depth of the earth. When God sets His choice upon an individual, His chase is fiercer than any gale. Like a seasoned hunting dog after its prey, when the scent of our souls is placed in his nostrils, no escape can prove successful.

Francis Thompson, author of the famous poem “The Hound of Heaven,” captured God’s chase of us with visceral imagery:

I fled Him, down the labyrinthine ways
Of my own mind; and in the mist of tears

I hid from Him, and under running laughter. Up vistaed hopes I sped;
And shot, precipitated,

Adown Titanic glooms of chasmed fears,
From those strong Feet that followed, followed after.

But with unhurrying chase,

They beat — and a Voice beat

More instant than the Feet —
“All things betray thee, who betrayest Me.”7

Your flight from God and His demand on your life is just as vain as Jonah’s flight to the ships sailing far from Nineveh. All your Christian life you may have thought it was you who was pursuing God, but all along it has been God pursuing you. So no matter how long it has been since you have looked toward the Father, no matter how absent you believe God is, neither the steps of your feet nor the sin of your life can move you one inch away from God’s love if you are in Christ Jesus. It may feel like absence now, but Presence is hot on your trail — even though it may come upon you like a storm.

Excerpted with permission from When God Isn’t There by David Bowden, copyright David Bowden.

If you feel God’s absence, do you remember once feeling His Presence? Is your love and longing for Him growing? If you have a loved one who is running from Jesus, be encouraged that they cannot run from heaven’s hound. Jesus is after His kids even if you see no evidence of it. Come share your thoughts with us on our blog. We would love to hear from you! ~ Devotionals Daily