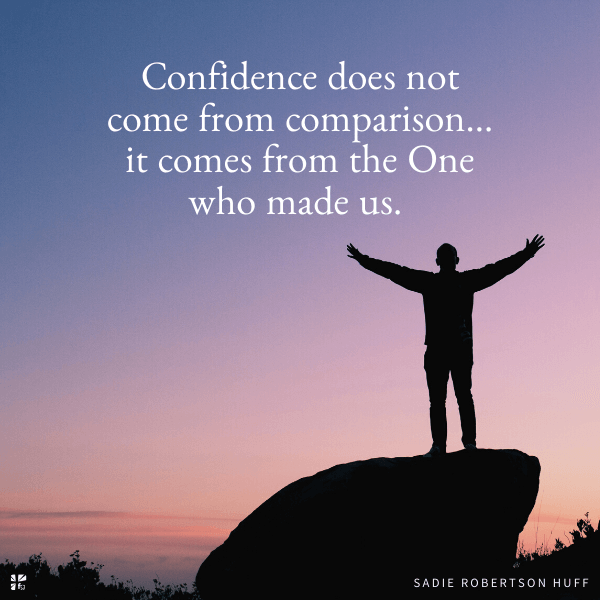 When we compare ourselves or compete with one another, it works against what God intends for us. We are designed for relationship — to be interdependent and supported by each other. We are truly better together. ~ Christine Caine1

My makeup was flawless, hair perfect. I was wearing a beautiful gown and high heels, about to walk the runway in New York Fashion Week — and I was probably the most insecure I’d ever felt in my life. Not long before then, I’d been at a photoshoot for the Sherri Hill line of dresses that had my name on them, and the photographer had said to me, “If you would lose ten pounds, you’d look like a real model.”

So on this day at Fashion Week I felt like a fake. I looked around at all the “real models” as I ate M&M’s from the food table in the dressing room. I quickly realized no one else was eating. They had their black coffee, and it seemed like that food table was just for looks, with an invisible Do Not Touch sign that everyone but me could see. My dress was a size 2 (how messed up is it that I was told I needed to lose weight when I was a size 2?!) while the other models’ dresses had to be taken in even in a size 0. My dress was the only one they did not have to alter to a smaller size, yet I was the one who felt the need to alter myself to look better.

Perfection is just so unrelatable, and honestly it is quite an illusion.

I can tell you from personal experience that it doesn’t matter how far in life you go or what achievements you attain — even walking the runway of New York Fashion Week — you can still hold on to insecurity from things spoken over you or things you speak over yourself. I looked around at those beautiful girls and am ashamed to say that comparison crept in. I caught myself noticing not only the flaws in me but the flaws in them. I took note of who had bad skin, crooked teeth, or thin hair.

Comparison is never pretty and can easily lead to criticism. We’re so in tune with our own flaws and insecurities, and then we fixate on others’ flaws in order to feel better about ourselves. But I want you to know something important I’ve learned: you can become confident in who you are without having to tear down someone else in your mind.

You might be shocked to read about my struggles. You might think that walking in New York Fashion Week was the moment I felt most beautiful. But I will tell you again,

I’ve known for years that I am fearfully and wonderfully made. I grew up with the nickname The Original and pasted Bible verses in my bathroom about confidence. I even got to live the life most girls dreamed of. But ultimately, it doesn’t matter what privileges, successes, or positive experiences you’ve had. What really matters is where your security comes from, and it has to come from something bigger than yourself. Take it from me: if you keep on looking around you and comparing yourself to others, you’ll keep on feeling insecure.

Since the Beginning of Time

I think there’s no question that social media is amplifying the comparison problem. Comparison, however, has been around since the beginning of time. Cain and Abel, the very first brothers we read about in the Bible, tell a tragic story of comparison that ended in murder. Cain was so jealous of Abel because God was pleased with Abel’s offering that he killed Abel (Genesis 4).

Then, not too many pages later, Abraham’s wife Sarah was so jealous of the slave Hagar’s ability to conceive a child by Abraham that she treated Hagar harshly — so Hagar fled to the wilderness (Genesis 16).

King Saul was jealous of David because the people said,

Saul has killed his thousands, and David his ten thousands. — 1 Samuel 18:7 NLV

This is kind of like someone in 2020 saying, “This guy has a thousand views on TikTok and that guy has millions.” As Saul kept stewing in his anger,

a bad spirit sent from God came upon [him] with power. He acted like a crazy man in his house, while David was playing the harp. Saul had a spear in his hand, and he threw the spear, thinking, ‘I will nail David to the wall.’ But David jumped out of his way twice. — 1 Samuel 18:10-11 NLV

You probably have never thrown a spear at someone, but you may have thrown invisible darts with your eyes when the spirit of jealousy took over.

I have a verse for you I bet you haven’t put in your Instagram bio: Do not take your wife’s sister as a rival wife and have sexual relations with her while your wife is living” (Leviticus 18:18). It is believed that this verse and law was written because of the story of Rachel and Leah from the book of Genesis in the Old Testament. Leah and Rachel found themselves in major competition for a man’s attention, both of them feeling stuck in an unfulfilling relationship.

Long story short, Jacob worked for seven years to marry Rachel, whom he loved and thought was beautiful. But on the day of the wedding, Rachel’s father, Laban, manipulated the situation to make her sister, Leah, Jacob’s wife instead. The problem was, Jacob did not find Leah beautiful nor did he love Leah like he loved Rachel. We can see that he definitely had true love for Rachel because he was willing to go through so much to marry her. It went beyond her looks or more superficial qualities. He worked for seven years, and then, when he was tricked into marrying Leah, he was willing to work another seven years to marry Rachel.

In the meantime, God saw that Leah was less loved than Rachel and gave her children. Genesis is clear about Leah’s hopes as she had her children. She said, “Now my husband will love me”; after a couple more babies, “Now this time my husband will be attached to me” (Genesis 29:32, Genesis 29:34 ESV). She was always thinking that if she had just one more child, then maybe her husband would love her. She faced a constant battle of finding her worth in what Jacob thought of her.

We may not find ourselves in this exact scenario, but I believe many of us have felt this way. Have you ever thought, If I could filter my pictures better to look like ______, then maybe he will love me? Or wondered, If I had this work done to follow the new trend in ______, then maybe they will see me? Perhaps you’ve considered, If I got the promotion at work that would put me on the same level as ______, then people would acknowledge me. Or, If I had a large following on social media like ______, then I would know that people like me.

Too often we find our worth in what people think about us and in how we line up with others, and we spend a lot of time and energy wondering how we can better ourselves enough for people to like us. We think that if we just do this or look like that, all our problems will be solved. But thinking this way moves us away from experiencing love. Why? Because we’re moving away from who we truly are. It’s like we’ve said before: we have to be known to be loved.

Let’s go back to the love triangle in Genesis. Rachel had Jacob’s love and affection — but still, she was deeply unhappy. She hadn’t had any children, and she compared herself to Leah, who had her own brood.

When Rachel saw that she was not bearing Jacob any children, she became jealous of her sister. So she said to Jacob, ‘Give me children, or I’ll die!’ — Genesis 30:1

But let’s be real — we get dramatic, too, when it comes to comparison and not having what someone else has or what we think will fulfill us. If I don’t get that or if I don’t look like her, then I’m worth nothing. We’ve all had a similar thought process. Allowing others to dictate our value can steal so much from our lives.

Here are a few examples of how this tends to play out:

You could have love and not experience love because of the insecurity in your heart.

You could have beauty and never feel beautiful because of the insecurity in your heart.

You could have everything and experience nothing because of the insecurity in your heart.

Looking back, there have been many times in my life when I had what I thought I needed, but I felt empty because it wasn’t what I truly needed.

I did not need to be skinnier to know that I was beautiful. I needed to trust that God made me how I am for a reason.

I did not need to be in a relationship to not feel lonely. I needed to believe that God was with me.

I did not need comments from people to know that I was liked. I needed to know that God loved me despite what I had been through.

What does insecurity in your heart keep you from experiencing or feeling? If there are some things you think you need in life right now (for example, to lose weight, get married, receive compliments), how might growing closer to God meet a truer, deeper need in your heart?

Does comparison cause you insecurity? It’s never worth it to look around and compare. Time and time again God’s Word shows us that comparing only causes pain and anger! Look to God for your worth and value. He is the only One who paid for you with His own life! Come share your thoughts. We want to hear from you. ~ Devotionals Daily