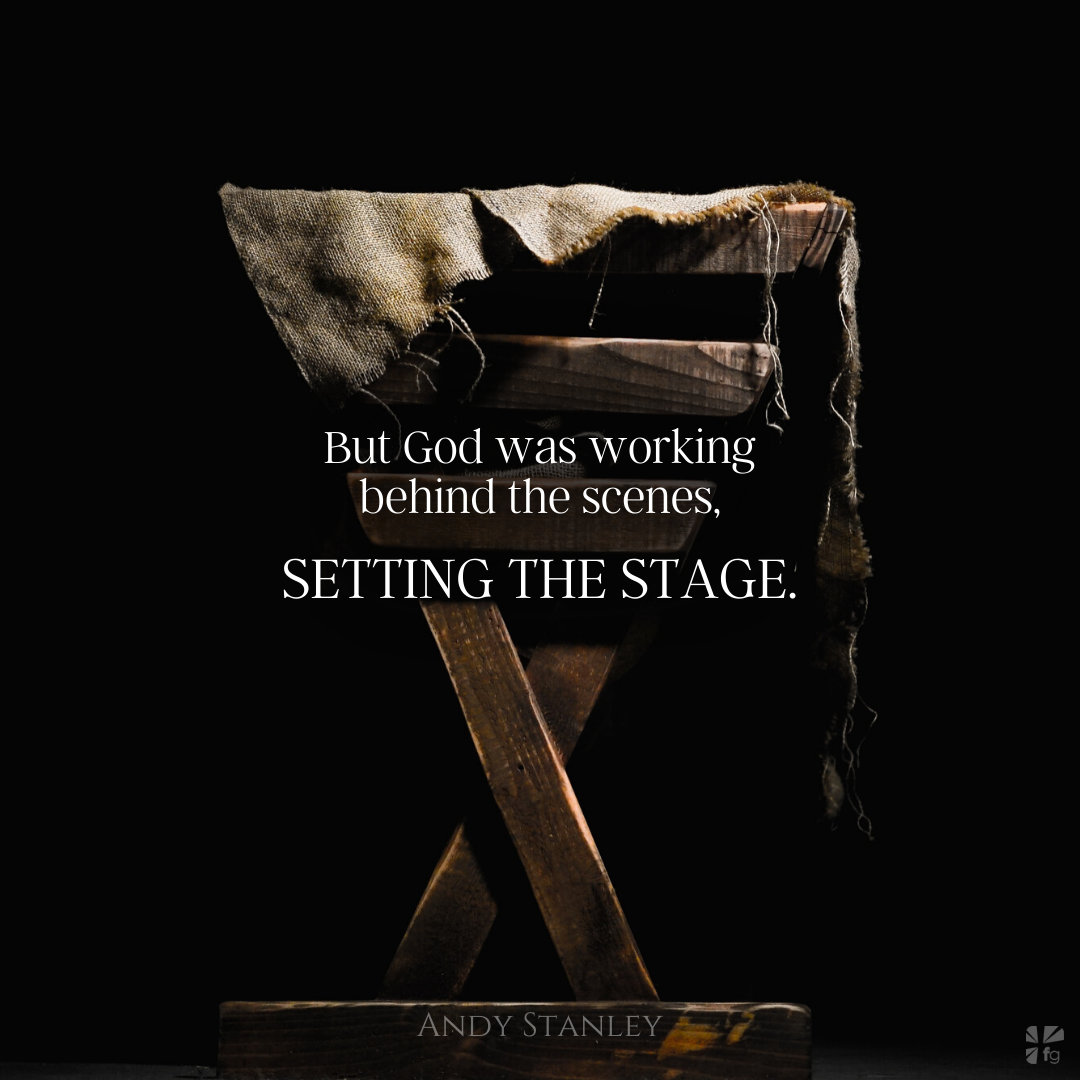 Two thousand years before Jesus was born, God made a promise to a man named Abram, who we would eventually know as Abraham. It wasn’t just any promise. It was an unbelievable, incoherent, impossible promise. And yet it set up the events around Christmas.

The Lord had said to Abram, “Go from your country, your people and your father’s household to the land I will show you. I will make you into a great nation, and I will bless you; I will make your name great, and you will be a blessing. I will bless those who bless you, and whoever curses you I will curse; and all peoples on earth will be blessed through you. — Genesis 12:1-3

At this point, Abram was about 75 years old with no children. It’s an understatement to say that it looked impossible that his descendants would ever become a nation, let alone that they would bless all the people on earth. But the author of Genesis tells us that Abraham believed the unbelievable. He made a choice that, no matter how improbable God’s promises seemed given his current circumstances, he could trust them.

Then what happened? Abraham eventually had a son named Isaac. Isaac had a son named Jacob, and Jacob had twelve sons. One of them, Joseph, was sold into slavery in Egypt by 10 of his brothers. But he rose to a position of influence with the Pharaoh and saved his family and the Egyptians from famine. Within a few generations, Abraham’s offspring had grown into a nation — but they were a nation of slaves inside Egypt. They didn’t feel blessed. And they certainly didn’t seem to be in a position to bless all the people on earth.

Hundreds of years later, God sent Moses to deliver His people from slavery. By the time Moses was done, no one in Egypt was feeling blessed by Abraham’s descendants. God led His people into the Promised Land, but that created conflict with those already living there. Again, few people were feeling blessed by Abraham’s descendants.

It can be challenging for us to read about all of the violence and war in the Old Testament. That doesn’t seem like something a loving God would allow. But it was commonplace in the ancient world, and it has been commonplace throughout most of human history.

We only find it offensive because we live on the other side of Christmas. We see the world in a completely different way, but this was part of the journey. And that journey produced the kingdom of Israel, ruled most famously by David and his son Solomon. It was a kingdom that had the power and wealth to bless people across the earth… but it didn’t.

Instead, Israel was split in two. Eventually, the Assyrians overran the Southern Kingdom, and the Babylonians took the Northern Kingdom into exile. Hundreds of years went by and the fulfillment of God’s promises to Abraham seemed more impossible than ever.

There was no reason for the people of Israel to believe God’s promises. But here’s what God said to the nation during this difficult time through the prophet Malachi:

My Name will be great among the nations, from where the sun rises to where it sets. — Malachi 1:11

To the people of Israel, this must have seemed ridiculous. God’s Name was being mocked among the nations. His name was a joke. No one from the surrounding nations was looking at the fate of Israel and thinking, I want to worship their God. Israel couldn’t feed or protect itself. It looked like a nation on its last legs.

Then, in 63 BC, Rome sent Pompey the Great to the area of Judah in Galilee. He conquered town after town until he was outside the walls of Jerusalem, the capital of Israel. And so began the Roman occupation of what came to be called the Holy Land. For 400 years, God’s promises to Abraham seemed to be null and void.

But then an extraordinary thing happened. Looking back on it years later, trying to put the whole story together, the apostle Paul wrote:

But when the set time had fully come, God sent His Son, born of a woman, born under the law… — Galatians 4:4

When nobody was expecting it, God sent the angel Gabriel to Nazareth, a town in Galilee, to a virgin pledged to be married to a man named Joseph, a descendant of King David.

The virgin’s name was Mary. The angel went to her and said,

Greetings, you who are highly favored! The Lord is with you.

Mary was greatly troubled at his words and wondered what kind of greeting this might be. But the angel said to her, “Do not be afraid, Mary; you have found favor with God. You will conceive and give birth to a Son, and you are to call Him Jesus. He will be great and will be called the Son of the Most High. The Lord God will give Him the throne of His father David, and He will reign over Jacob’s descendants forever; His kingdom will never end. — Luke 1:27-33

But God was working behind the scenes, setting the stage. The Christmas story began 2,000 years before the first Christmas. And it continues to unfold 2,000 years later.

So, who needs Christmas? God decided the world needed Christmas.

Christmas reminds us in the most remarkable way that God is active even when He feels distant or absent. Even when God is silent, He is not still. Through this remarkable story, we are reminded on a personal level that God cares about us. He doesn’t just think in terms of nations; He knows us as individuals.

God didn’t just send His Son to be the Savior of the world. He sent Jesus to be your Savior in your world.

The Christmas story means that despite challenging circumstances, we can trust God. Even when it seems like God can’t possibly care about us, He is present, He is listening, and He keeps His promises.

BEFORE THE NEXT SESSION

During the week, spend some time each day reading the following passages in your Bible: Matthew 1:18-25, Romans 5:1-11.

Come share your thoughts on Who Needs Christmas! We want to hear from you!