Have you ever wondered why allowances don’t work?

We don’t believe in paying a child simply for being part of a family. We’ve seen too many grown kids who received paychecks from a family business, not because of their diligent efforts, but simply because of their relationship with the owner of the company. The result was overindulged, entitled kids who did little work and created great distraction and frustration for other employees.

Entitlement “earnings,” whether in a business, a government, or a family, have been proven over and over again to be detrimental to initiative, creativity, and productive labor. Basically, entitlements are a total failure.

An allowance is not a “real world” method for teaching kids to be responsible with money. Unfortunately, this left our son (John) with a very inconsistent source of income. The only money he would accumulate was from an occasional special chore he did, items he sold at our garage sales, or gifts from relatives on his birthday and Christmas.

Initially we had John put all of his money in a small piggy bank. But once we actively started searching for a system, we tried a couple of other things: three Styrofoam cups labeled Give, Save, and Spend; and multipart banks—similar to My Giving Bank, the ABC Learning Bank, or the Money Savvy Pig bank. All of these offer young children the ability to segment their money into multiple categories and are a wonderful way to take the first steps toward budgeting. John enjoyed using his My Giving Bank for about two years.

But as John grew older and accumulated more money, the bank became harder to use. It was difficult to get specific amounts of money out of it when we wanted to go shopping, and the bank became increasingly heavy. Plus, it was hard to calculate, on a regular basis, just how much money John had, or keep track of what he had spent on a particular purchase. In spite of a three-part bank’s shortcomings, we still believe that it is valuable for teaching younger children basic money-management skills.

Why Allowances Don’t Work & Other Advice

A System Discovered – Alternatives to Allowances

About two years later, in 1995, Steve discovered several more components for our system from the book Three Steps to a Strong Family by Richard and Linda Eyre. The Eyres discussed Family Traditions (we had some), Family Laws (we had those also), and a Family Economy (that’s what we were missing)!

In the Family Economy, their kids earned points each day for accomplishing four predetermined tasks or objectives. Once parental approval was received, the kids marked their accomplishments on a wooden peg board. Four points each day, six days per week, for a total of twenty-four points. The kids earned a set amount of money for each point based on their age, with a bonus if they reached a specific point threshold. Afterward, they were required to divide their earnings into predetermined budget categories.

Steve created a daily paper “time card,” one for each kid to record daily points on. He printed sixteen time cards on a sheet of paper, in a word processing program, and then cut the sheet into smaller rectangles. Our older kids received one small time card each day (Abbey and Joe were too young). Every morning at breakfast, Steve would review the points on each time card and sign off on what they had earned. Since Steve was away from home most days, Annette was often called on to corroborate the points that were earned. The time cards were then put into a little wooden bank with a post-office-box lock on the front, giving the system an air of value and security.

Each Sunday we would pull out all of the small sheets of paper, organize them by day and child, and total the points.

The system was taking shape and the kids loved it, but there were still flaws. With three kids actively participating in the program, it was hard to keep track of eighteen little sheets of paper. Inevitably one of the kids would misplace a time card and we’d all try to either locate it or re-create it. Eventually Steve created a single-page time card for all of the kids to use each week. One large 81⁄2 x 11–inch sheet of colored paper, with one column for each child, was much easier to keep track of. Each column consisted of six days—Monday through Saturday—and within each day there were lines for the daily points.

We started using the system in 1995 and have fine-tuned and utilized it for our kids from that day on.

Have you discovered why allowances don’t work? Leave a comment below – we’d love to hear your thoughts on this topic? We agree that teaching your kids to be MoneySmart can be one of the most challenging parts of parenthood! 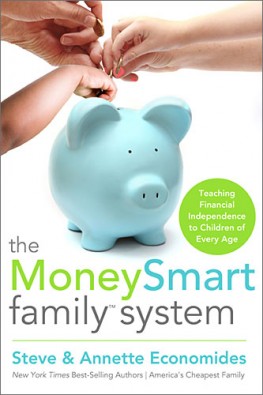