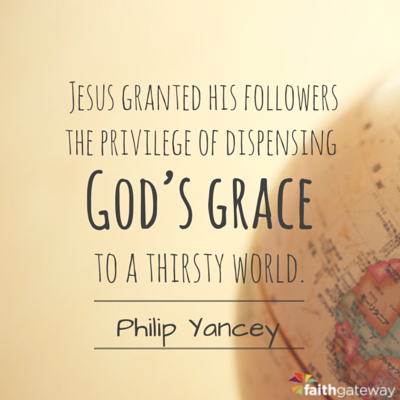 Last week, the CNN website led with this headline: Millennials Leaving Church in Droves, Study Finds. “We’ve known that the religiously unaffiliated has been growing for decades,” said the lead researcher on the new Pew Research Center report. “But the pace at which they’ve continued to grow is really astounding.”

Why the sudden shift?  And what can we do about it?  These are the questions addressed in Philip Yancey’s most recent book Vanishing Grace: What Ever Happened to the Good News?  An excerpt follows.

The United States is undergoing a marked change in its attitude toward religion, and Christians here face new challenges. When a blogger named Marc Yoder wrote about “10 Surprising Reasons Our Kids Leave Church,” based on interviews in Texas (a comparatively religious state) his post went viral. Instead of a hundred or so hits, his website got more than half a million. “There’s no easy way to say this,” wrote Yoder, in words that struck a nerve:

“The American Evangelical church has lost, is losing and will almost certainly continue to lose our youth.”

According to Barna surveys,

61 percent of today’s youth had been churched at one point during their teen years but are now spiritually disengaged.

If we don’t adapt we will end up talking to ourselves in ever-dwindling numbers. What lies behind the downward trend? I got some insight from a friend of mine in Chicago who once worked on the staff of Willow Creek Community Church, one of the nation’s largest churches. Daniel Hill took a side job as a barista at a local Starbucks where, he now realizes, his pastoral education truly began.

One of his customers said, when the conversation turned to religion, “When Christians talk to you, they act as if you are a robot. They have an agenda to promote, and if you don’t agree with them, they’re done with you.” Often Hill heard an anything goes attitude: “I don’t personally follow Christianity, but I figure whatever makes you happy, do it.” As one person told him, “Look, we all know that ‘God’ is out there at some level, but no one has a right to tell another person what ‘God’ looks like for them. Each person is free to express that however they want, but they should keep their opinions to themselves.”

During his time at the coffee shop Hill heard two distinct approaches to the faith. “Pre-Christians” seemed open and receptive when the topic of religion came up. They had no real hostility and could imagine themselves connecting with a church someday. In contrast, “post-Christians” harbored bad feelings. Some carried memories of past wounds: a church split, a domineering parent, a youth director or priest guilty of sexual abuse, a nasty divorce which the church handled clumsily. Others had simply absorbed the media’s negative stereotypes of rabid fundamentalists and scandal-prone television evangelists.

Listening to Hill’s stories, I thought back to C. S. Lewis’s analogy of communicating faith in secular Britain. It’s the difference between courting a divorcée and a virgin, Lewis told a friend in a letter. A divorcée won’t easily fall for sweet nothings from a suitor — she’s heard them all before — and has a basic distrust of romance.

In modern America, Hill estimates, around three-quarters of young “outsiders” qualify as post-Christian, the divorcées of faith.

Not everyone falls into a neat category, of course, but I found Daniel Hill’s perspective helpful. I began to think through my own contacts with people who have no faith commitment. Having lived in Hill’s home city of Chicago, I must agree with his assessment of young urban dwellers. No one else in our six-unit condominium went to church, and most of them viewed Christians with suspicion. Some of my book group friends in Colorado also fit the post-Christian category.

On the other hand, large portions of the American South and Midwest remain open to faith and qualify as “pre-Christian.” I grew up in the religion-soaked South, and on return visits I’m always struck by the difference in attitudes toward religion there. The Bible Belt largely accepts the framework of the gospel. There is a God (don’t our coins affirm “In God We Trust”?); we have sinned (country music spells out the salacious details); and Jesus provides a way to forgive those sins (you can still see “Repent” or “Jesus Saves” slogans on some Southern barns and billboards). Hit the radio’s Scan button while driving in the South and there’s a good chance you’ll hear a testimony from someone recounting their once-wayward life, now transformed by a born-again conversion experience.

On my travels to other places too — Africa, Latin America, parts of Asia — I see the continuing appeal of the basic Christian message. People there associate Christians with missionaries who came to them as pastors, teachers, doctors and nurses, agricultural experts, and relief workers. The gospel answers questions of meaning, holds out the promise of an afterlife, and provides a community of support for those in need. To many in the world it still sounds like good news, a Godspell to break the dark spell that shadows so much of life on earth.

When I return from those trips it comes as a shock when people in my home country speak of Christians more sinisterly. Post-Christians hear the same music as if distorted through cracked speakers. Evangelists who speak of sin come across as shrewish and hectoring: What gives them the right to judge my behavior, especially when so many of them mess up their own lives? Doctrines such as the Trinity, the Atonement, Original Sin, and Hell seem baffling, even incomprehensible, and who can legitimately claim truth anyway? People who live in prosperous countries, intent on enjoying this life, pay little heed to the idea of an afterlife. And a string of New Atheists upbraid all religion as bad news, a primary source of fanaticism and wars — one called the atrocities of 9/11 “a faith-based initiative” — and long for the day when the human species will finally outgrow its need for religion.

In Europe, the seat of Christian faith for most of its history, many do not give it a thought. Barely a third of French and British respondents even believe that God exists. While visiting France I spoke to a Campus Crusade worker who had practiced evangelism in Florida before moving to Europe. Carrying a clipboard, he would walk up to strangers and ask, “If you died and God asked why you should be allowed into heaven, what would you say?” That approach got mixed results in Florida, but in France he was met with blank stares; he might as well have been speaking Urdu. Now he leads with the question, “Do you believe in God?” and the typical French response goes something like this: “What a fascinating question! Let me think. I’ve never really considered it before.”

As I travel internationally I feel like a commuter between post-Christian and pre-Christian societies.

The cultural divide stands out sharply in the U.S., where Christians remain a force to be reckoned with.

Some Christians respond to the divide by making harsh judgments about the people they disagree with — one of the main reasons evangelicals have an unsavory reputation. I cringe when I hear such words, and respond by keeping mostly quiet about my faith.

Neither approach is healthy.

Jesus granted His followers the immense privilege of dispensing God’s grace to a thirsty world. [tweet this]

As one who has drunk deeply of that grace, I want to offer it to a world adrift. How can we communicate truly good news to a culture running away from it?

It’s the pervasive question in America today — What gives them the right to judge my behavior, especially when so many of them mess up their own lives? — in response to any expression of the tenets of the Christian faith. How can we respond in love and grace to the masses of post-Christian divorcées of faith? Join the conversation on our blog! We want to hear from you!