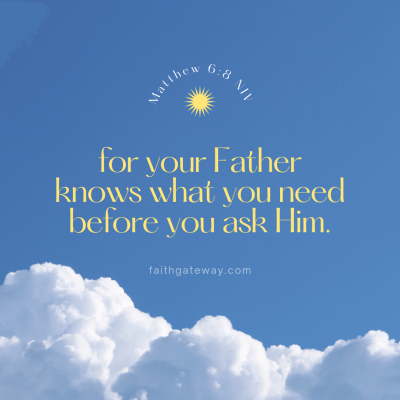 I look first to Jesus for clues to the mysteries of faith, and regarding prayer He did not seem to share some of my biggest struggles. He never wondered whether God exists, whether anyone is truly listening. He never questioned the importance of prayer; indeed, He would flee a crowd of needy people in order to spend time alone with God and sometimes devote all night to the task. The way Jesus talked, prayer made everything else possible.

Jesus seemed fully at ease with the Father and at unease with the world. For Him, prayer provided a refreshing reminder of cosmic reality, the “view from above” so often obscured on planet earth. Sometimes Jesus reminisced about that hidden realm: praying at supper the night of His arrest He recalled “the glory I had with you before the world began.” Occasionally He felt such frustration with conditions on earth that He would let loose with a sigh: “O unbelieving generation… how long shall I put up with you?” Jesus came from a place where God’s command met no opposition; He knew exactly what He was asking when He instructed us to pray: “Your will be done on earth as it is in Heaven.”

Just as Jesus reminisced about His suspended identity, in a few rare instances the Father brought it tenderly to mind. “You are my Son, whom I love; with You I am well pleased,” God said as Jesus emerged from the water at His baptism. He heard a similar word of reinforcement at the Mount of Transfiguration — a close encounter that left His disciples face-down on the ground, terrified — and yet another at a melancholy moment shortly before His death. Each time, bystanders heard the voice and were startled by the phenomenon. Jesus, a refugee from Heaven, felt comfort, not astonishment.

From His thirty-something years on earth, we have only these three glimpses of a supernatural boost. The rest of the time, for spiritual nourishment Jesus relied on the very thing we rely on: prayer. Jesus counted on prayer as a source of strength that equipped Him to carry out a partnership with God the Father on earth. Jesus freely admitted His dependence: “the Son can do nothing by Himself; He can do only what He sees His Father doing.”

In a telling comment Jesus also said, “Your Father knows what you need before you ask Him.” He could not mean that prayer is unnecessary, for His own life belied that. He could only mean that we need not strive to convince God to care; the Father already cares, more than we can know. Prayer is not a matter of giving God new information. Instead of presenting requests as if God may not know them, it might be more appropriate to say, “God, You know I need this!”

And that is how Tim Stafford found a sort of resolution to his questions about prayer:

Here, I believe, is the key to understanding what is most personal in prayer. We do not pray to tell God what He does not know, nor to remind Him of things He has forgotten. He already cares for the things we pray about…. He has simply been waiting for us to care about them with Him. When we pray, we stand by God and look with Him toward those people and problems. When we lift our eyes from them toward Him, we do so with loving praise, just as we look toward our oldest and dearest friends and tell them how we care for them, though they already know it…. We speak to Him as we speak to our most intimate friends — so that we can commune together in love.

I am writing away from home, sequestered in the mountains in the middle of winter. At the end of each day I talk with my wife, Janet, about the events of the day. I tell her how many words I wrote and what obstacles I met in the process, what Nordic ski or snowshoe trails I explored (exercise serves as either cure or surrender to writer’s block), which prepackaged frozen food I ate for dinner. She tells me about the progress of her nagging cold, the mail that has been accumulating in my absence, the neighbors she has encountered walking their dogs to the mailboxes down the road. We discuss the weather, current events, news from relatives, upcoming social engagements. In essence we meditate on the day with each other, in the process bringing its details into a new light.

What I have just described bears a striking resemblance to prayer, too. Prayer, according to one ancient definition, is “keeping company with God.” I like that notion. It encompasses the epiphanies that happen during my day: turning a corner on a ski trail and seeing a gray fox skitter away, watching the pink alpenglow on the mountains as the sun sets, meeting an old friend at the grocery store. By incorporating those experiences into my prayers, I prolong and savor them so that they do not fall too quickly into my memory bank, or out of it.

“To pray is to make the most of our moments of perception,” says Alan Ecclestone. “You pause on the thing that has happened, you turn it over and over like a person examining a gift, you set it in the context of past and future, you mentally draw out its possibilities, you give the moment time to reveal what is embedded in it.” Janet, after all, shared my experiences vicariously as I described them to her whereas God was present all along.

On the other hand, keeping company with God also includes expressing the times of trial and frustration. In Fiddler on the Roof, Tevye keeps up a running dialogue with God, giving credit for the good things but also lamenting all that goes wrong. In one scene he sits dejected by the side of the road with his lame horse. “I can understand it,” he says to God, “when You punish me when I am bad; or my wife because she talks too much; or my daughter when she wants to go off and marry a Gentile, but… What have You got against my horse?!”

Jesus set the pattern for prayer as a continuous mode of friendship. The Old Testament contains many beautiful and magnificent prayers, usually led by a king or a prophet, and the Jews tended to view prayers as formal recitations led by someone else. Even the psalms contain notations for use in group worship rather than private meditation. Some scholars suggest that Jesus virtually invented private prayer. No one in the Old Testament directly addressed God as “Father,” whereas Jesus did so 170 times. The model prayer He gave deals with the stuff of daily life — God’s will, food, debts, forgiveness, temptation — and His own prayers showed a spontaneous communion with the Father that had no precedent. His disciples, no novices at prayer themselves, marveled at the difference. “Teach us to pray,” they asked.

As every follower of Jesus learns, however, prayer does not come as naturally to the rest of us as it did to the original prayer revolutionary. I find prayer hard work, not the rejuvenating refuge it meant to Jesus. I struggle to see prayer as a dialogue, not a monologue. How can I commune with a God who tends not to use audible words in response? When I review the day with my wife on the telephone, she responds with laughter and empathy. God does not, at least not in any measurable way.

As a training ground, I read the psalms. I read Jesus’ prayers, and the prayers of His followers. In the process I learn some of God’s mysterious ways: an odd preference for ornery and even rebellious characters (this gives me comfort), a propensity for tests of faith, a baffling tolerance of human freedom, a slowness to act, a shyness. I learn that God and I have a different view of the use of power and a different time line. God has no need to prove anything.

In prayer I speak haltingly at first, “slow of speech and tongue” like Moses. I open my soul, exposing by will what God already knows by wisdom. The psalms tell of panting with an open mouth, of thirsting for the living God, of longing for God as parched earth longs for water. They sound like letters from a heartsick lover, and at the core that’s what we seekers are. I tell myself that God is inclining an ear to my prayer, and over time I learn to believe it. I see that God, like most of us, cares mainly about being loved, believed, trusted, honored.

As I persist at prayer, I recognize an answering Partner who takes up the other side of the dialogue, a kind of internal alter ego representing God’s point of view. When I want revenge, this partner reminds me of forgiveness; when obsessed with my own selfish needs, I am struck with the needs of others. Suddenly I realize I am not talking to myself in this inner dialogue. The Spirit of God is praying within me, communicating the will of the Father.

“My secret is a very simple one: I pray,” wrote Mother Teresa of Calcutta, a modern master of the skill:

Prayer is simply talking to God.

He speaks to us: we listen.

We speak to Him: He listens.

Learning to dialogue with God will never end because we are unequal partners, God and I. Admitting that, bowing before it, helps open my ears. Pursuing God despite the differences helps open my mouth, and then my heart.

Excerpted with permission from Prayer: Does it Make Any Difference? By Phillip Yancy, copyright Philip D. Yancey.

What is a common struggle in your day-to-day prayer life? How are you trying to grow in this area? Come share on our blog!