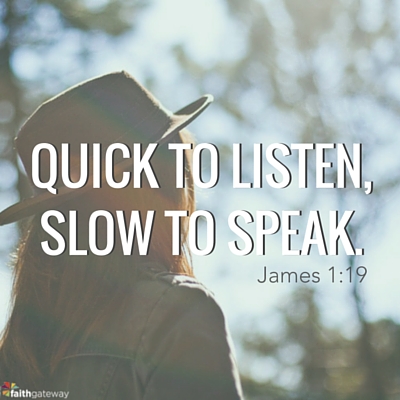 My dear brothers and sisters, take note of this: Everyone should be quick to listen, slow to speak and slow to become angry. — James 1:19

This culture we live in, this generation I’m a part of, is teetering on the fence between unending apathy and an explosion of frustration. As a result of money’s power and influence in our political system, our own ability to influence change at the political level is shrinking.

Our voices are being drowned out by the constant chatter and vitriol found on the twenty-four-hour news networks and on the Internet. We’re being defined by the sarcasm and wit of Jon Stewart. Most of all, we’re being sold the lie that our differences are more important than what we have in common.

I am so tired of the puffed-up, heated rhetoric that’s full of empty promises and over-generalizations. Those of us in the millennial generation have the potential to rise above the apathy we’ve been labeled with.

Change will start with us.

It starts over coffee, asking a neighbor what her childhood was like.

It starts with knowing the homeless man’s name – the one who stands on the corner by your apartment every afternoon – and then asking how you can help.

It starts with getting out from behind a screen and picking up the phone to call a friend you haven’t heard from in a while.

It starts in our homes, in our families.

It starts with teaching our kids to listen before speaking.

It starts with turning off the constant chatter of the talking heads on CNN.

It starts with us.

It starts with knowing and sharing our own stories.

It starts when, after listening, we decide to speak.

It starts with understanding our own history and how we arrived at the opinions we hold today.

What has shaped you the most over the years? Is it your relationship with your parents, or the lack thereof? Or maybe you were moved by that series your pastor preached a few years back. Was your worldview impacted when your high school friend went to get that abortion? Perhaps it was sitting with your friend after her son was diagnosed with cancer – and you knew she didn’t have health insurance.

Real people stand behind the issues that face our culture and government, but their faces are fading into gray. We’re losing sight of them. The only way to bring them back into the forefront of the conversation is to know their stories and be brave enough to tell them. Their stories matter.

I’ve come to believe that government or institutions aren’t going to fix all the problems of the world. And as a believer in Jesus Christ, my allegiance lies with His kingdom first – not with a political party, platform, or ideology. As His follower, I’ve been instructed to be in this world but not of it. So I live in this torrential tension, which won’t fully resolve until He comes back to make all things new.

I can see Jesus’ kingdom breaking in, in big and small ways, right here, right now. And part of that transformation is looking past the issue and into the heart of the person.

Can stories really change the game? Yes, they can. But only if we’re brave enough to listen – then speak.

Change starts with us. We don’t have to be swept up in the strong, current culture of speaking before listening, drowning others out with argumentative, sarcastic talk, and not slowing down enough or caring enough to really hear someone. Jesus listened to people and heard their hearts. How can you use courageous self-control and listen before speaking today? Whose story do you need to hear? Join the conversation on our blog! We’d love to hear from you about influencing change with the power of listening!