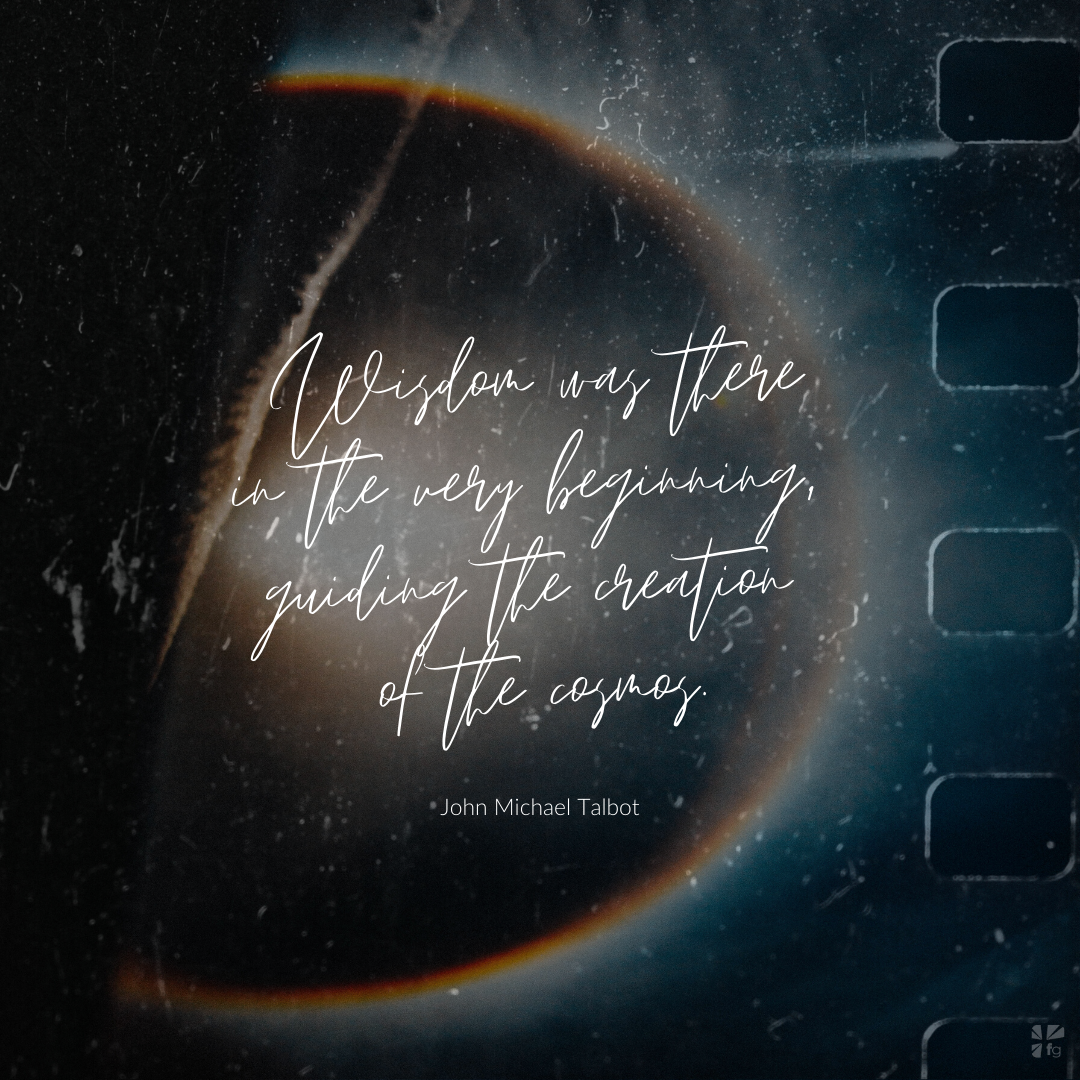 Wisdom was there in the very beginning, guiding the creation of the cosmos.

Wisdom revealed the one true God to the Jewish people, and spoke truth through their prophets and teachers.

Wisdom gave herself to King Solomon, a man who sought her with his whole heart and would become world renowned for sharing her with the world.

Wisdom filled Jesus, the Son of God who worked miracles and taught people about the Kingdom of Heaven through parables.

The Holy Spirit gave a special gift of wisdom to Jesus’ disciples. This gift would guide and empower them as they proclaimed His Gospel and created the first churches.

The Spirit has been sharing this powerful gift with believers ever since. History shows that at times people have sought and used this gift to serve God and love their neighbors, while at other times we’ve neglected it, preferring to rely on our own understanding.

And wisdom will be there to the very end, as it is one of the divine characteristics that angels cite as they encircle God’s throne and sing his praises:

“Amen! Praise and glory and wisdom and thanks and honor and power and strength be to our God for ever and ever. Amen!” — Revelation 7:12

If the Psalms were Israel’s hymnbook, Proverbs provided a handbook for practical living.

Modern readers may see Proverbs as a random collection of unrelated aphorisms, something like an ancient version of Benjamin Franklin’s Poor Richard’s Almanac. But the book is actually a guide prepared by ancient Jewish leaders to help people succeed in every area of life: relationships, family, work, business, ethics, government, and community.

The form of wisdom offered in Proverbs is extremely practical and earthy, not mystical, esoteric, or otherworldly.

These proverbs from numerous authors were collected and organized over centuries before being included in Scripture. Many are attributed to King Solomon, the son of King David, who reportedly spoke some three thousand wise sayings.

Solomon’s story is told in the Old Testament book of 1 Kings, which describes how he received divine wisdom.

God appeared to Solomon one night in a dream and made a stunning offer: “Ask for whatever you want me to give you.” Solomon requested the gift he prized above all:

Give Your servant a discerning heart to govern Your people and to distinguish between right and wrong.

Suppose you won the lottery, and now you had millions of dollars to spend on whatever possessions you wanted. Solomon faced a similar opportunity. He could have had whatever he wanted. He chose wisdom, and that choice should be a model for all of us. Too often, it seems, we seek other things that provide less payback than wisdom gives us.

God fulfilled His promises to make Solomon wise and wealthy, giving him “very great insight, and a breadth of understanding as measureless as the sand on the seashore. Solomon’s wisdom was greater than the wisdom of all the people of the East, and greater than all the wisdom of Egypt…. And his fame spread to all the surrounding nations…. From all nations people came to listen to Solomon’s wisdom, sent by all the kings of the world, who had heard of his wisdom” (1 Kings 4:29-34).

To see Solomon’s wisdom in action, read about his most celebrated decision, a case where two women claimed the same child in 1 Kings 3:16-28.

Some people say Christians are gullible goofballs who believe and do the silliest things.

They believe in a God who submitted to punishment on a cross, died, came back from the dead, and now answers billions of prayers.

They engage in cultish rituals like eating flesh and drinking blood.

They forgive cold-blooded murderers who entered their sacred assemblies and gunned down innocent worshippers and loved ones. What fools!

For the message of the cross is foolishness to those who are perishing, but to us who are being saved it is the power of God. — 1 Corinthians 1:18

Paul’s message was the inspiration for my song “The Cross Is Foolishness”:

But we preach only Jesus crucified

It seems absurdity, it seems so foolish

But to us it is the wisdom of God

Welcome to the paradox of wisdom. A paradox is an apparent contradiction that somehow reveals a deeper, intuitive truth.

Likewise, wise men and women seek God. They hunger for the Spirit’s gift of wisdom. James told us how to ask:

If any of you lacks wisdom, you should ask God, who gives generously to all without finding fault, and it will be given to you. — James 1:5

As you continue asking God for the gift of wisdom, make sure you do what James suggested in an earlier verse:

Let perseverance finish its work so that you may be mature and complete, not lacking anything. — James 1:4

You can start by digging more deeply into some of the biblical wisdom books we explored in this chapter.

Wisdom may not be something you’ve ever thought about asking God for. It may be the last thing on your list of prayer requests right now, but maybe it’s time for a change. Adopting a rhythm of asking for wisdom is likely to bear fruit you’ve never seen before. Do you ask God for wisdom often? Is wisdom something you need to work into your prayer life more? Come share on our blog!