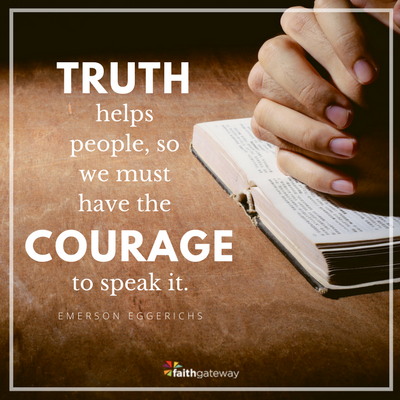 Our trustworthiness rests on our truthfulness. When Teddy Roosevelt was a cattle rancher, he and a new cowboy were riding across a section of his land when they came across a maverick, an unbranded yearling from a neighboring ranch. It had wandered onto Teddy’s land, and he instructed the cowboy to brand it with his neighbor’s brand, as was the custom. Roosevelt recounted that the man replied, “‘All right, Boss; I know my business.’ ‘Hold on a minute,’ I said; ‘you are putting on my brand.’ He said, ‘I always put on the Boss’s brand.’ And then I said, ‘Oh! all right; go back and get your time.’ He said, ‘What’s that for?’ And I said, ‘My friend, if you will steal for me, you will steal from me.’”1

Roosevelt had learned a sad but true reality. One who steals for you is a thief, and thieves will steal from you when the occasion enables it.

The same holds true with the person who lies. The one who lies for you will lie to you.

Do we lie at work? Once others at our place of employment suspect us of being untruthful, the whispering behind our backs begins. When we compromise the truth, our credibility sinks speedily. People can’t stand liars. Actually, they fear the liar could lie about them or lie to them.

Lying feels dark to people. Satan himself is referred to as a liar.

For certain, once we are viewed as one who lies, will we be believed when telling the truth? Unlikely. If we wish to be trustworthy, we must be truthful. As Michael Josephson said, “Honesty doesn’t always pay, but dishonesty always costs.”2

Truth helps people, so we must have the courage to speak it.

Because I pastored in a college town, many young couples requested that I do their weddings. Before I would agree, they needed to participate in our church’s six-week premarital course, which included testing. The leadership of the church made this mandatory, making it clear that if any red flags appeared, they reserved the right to say no to doing the ceremony on our premises. The couples knew this ahead of time. Every so often we had to say no. It was never easy. The bride and groom were hurt. However, I recall one set of parents profusely thanking us for refusing to do the wedding since they saw red flags all over the place but felt they could not say anything. They were forever grateful that we cared enough to confront.

Telling the truth based on our premarital assessment tools was not joyful, but we knew this was the right thing to do. Our motives were pure. Our counseling was free. We desired to help these couples succeed in their marriages. We knew the best predictor of future behavior was past behavior, and because these couples had serious behavioral issues from the past, there was no reason to believe anything would change unless they changed first. We needed to humbly but candidly tell them the truth. This took courage.

Though many couples were unhappy with our assessments, there were others we counseled to postpone their marriages until these past issues were addressed who humbly responded, “Please tell us what we need to do.” More than three decades later some of these couples, who later married, are some of our best friends. The truth helped them immeasurably.

We must not let fear keep us from telling the truth. Plato said, “I shall assume that your silence gives consent.”3 A most significant point of this book is this:

If what we think is true, kind, necessary, and clear, we need to have the courage to hit send.

This isn’t about refraining from speaking; this is about speaking. Please hear me. Hit send! God never lies, and He calls us to imitate Him. Many of us are aware of certain Bible verses, such as,

Then we read in Ephesians 5:1,

Therefore be imitators of God, as beloved children

to which most of us react, “Well, I can’t be perfect. I can’t be like God and never, ever lie.”

But if that is so, then why does God call us to lay “aside falsehood” and “speak truth” (Ephesians 4:25)? He does not favor those who love and practice lying (Revelation 22:15).

Because God loves us, He will not ignore our lying. Jesus revealed,

But I tell you that every careless word that people speak, they shall give an accounting for it in the day of judgment. — Matthew 12:36

Each one of us will give an account of himself to God.

Is this a fear tactic designed by biblical writers, and even Jesus, to scare people into conformity? Should this notion of a judgment be rejected since some create a caricature of God as a cosmic Killjoy ready to pounce on us for fibbing? Each of us must decide what he or she believes. For me, I take seriously what Jesus said. I would prefer not to believe it, but I must. I have chosen to trust Christ both for His promises and His warnings.

“But, Emerson, God will forgive us of all sins, including our lies. Christ died on the cross to pay the penalty for all of my sins, including my lies.” Yes, but there are two things you and I cannot halt. One, God’s loving discipline of us on earth for lying. Read Hebrews 12 about the love of God prompting His fatherly discipline of us as His children. In other words, He loves us too much to turn a deaf ear to our falsehoods. As an earthly father rebukes and corrects a son who lies, God does the same with us. Second, though eternal life is a gift based on our faith in Christ, who paid the penalty for all of our sins, God provides an add-on called “rewards.”

Once in heaven, which we cannot earn, there are rewards given to the forgiven! God rewards us for what we have done.

These rewards are important because God says they are important. Some believers at the judgment will receive no rewards. I am supposing that the careless words to which Jesus referred (Matthew 12:36), and about which we must give account, will be a contributing factor to never receiving His rewards and can cause us to lose the rewards we had gained, according to the apostle John (2 John 1:8)! Those who live their lives in the kingdom of this world, advancing the lies of their worldly associations, will one day realize they built their houses on sand (Matthew 7:26) instead of on the words of Jesus in imitation of Him. For the true believer, this matters more than what can be gained by the lie — infinitely more.

Truth is easier to remember than the truth plus lies.

As I said earlier, many of us have decided to be truth-tellers for less than noble reasons. We realize we aren’t smart enough to remember both the truths and the lies, and we are bound to get caught in a lie. This is why during cross-examination the lawyer asks the same question, varied this and that way, six or eight times over a two-hour deposition. If the interrogated person is lying, he cannot keep track of all the details that he fabricated earlier.

Telling the truth is so much easier.

The story goes that in court one day the prosecuting attorney raised his voice at a boy who had spent the last twenty minutes on the witness stand and exclaimed, “Be honest, son. Your dad told you what to say in court, didn’t he?” The boy replied, “Yes sir, he did.” The lawyer gleefully thought he had snared the kid. “Okay, son, what did he tell you to say?” Humbly, the boy said, “He told me, ‘Son, just tell the truth, and you need only say the same thing over and over when questioned.’”

I love that story. Mark Twain wrote, “If you tell the truth you don’t have to remember anything.”4

Show me a person who is a truthful communicator in e-mails, tweets, phone calls, lunch meetings, and at family gatherings and so forth, and I will show you a person who has concluded, “Lies are too wearisome and worrisome.”

Are you a committed truth-teller? Or has your life gotten very complicated with all the different stories you’ve told different people? Jesus called Himself “the Truth” and He modeled radical truth-telling, so let’s be imitators of Him! Come share your thoughts with us on our blog. We would love to hear from you! ~ Devotionals Daily