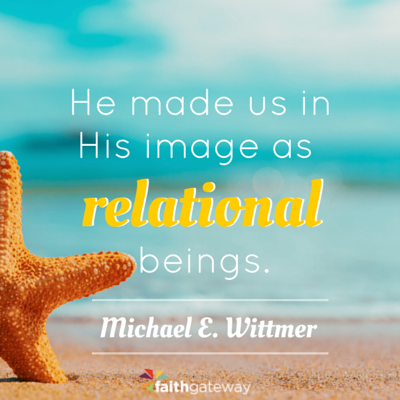 How can you tell if you’re winning the game of life? The standard scoreboard looks something like this:

Success: What have you done?

Stuff: What do you have?

Status: What do other people think about you?

What if the way we keep score is not the way God keeps score? What if most people are kicking their ball at the wrong goal? Then it will happen, as Jesus said, that

Our primary purpose is to know and love God, and before we leave the first page of Scripture, we learn a little more. Genesis 1:27 says:

Notice that the first two lines say the same thing, in reverse order, while the last one replaces the term “image” with an explanatory tag. What does it mean to be made in the image of God? It means we are made “male and female.” Why is that significant? Because of who God is.

The doctrine of the Trinity — that God is a loving Father, his beloved Son, and the Spirit who unites them in his bond of love — is a Christian distinctive. It is also a huge advantage.

If God were merely a single person, as Jews and Muslims believe, He would be entirely self-centered.

How could such a God love? He would have existed from eternity past all by Himself, with literally no one and nothing else around.

Why would this singular person create something else to exist? Perhaps He was lonely, a single God, nonsmoker, looking for companions to enjoy long walks in a garden that He would provide. This God would inevitably sound desperate, as He had been waiting an eternity in what amounts to solitary confinement. He would be too needy to ever love truly.

A singular divine person might also create to show off His glory. Perhaps He grew tired of appreciating His awesomeness and wanted someone else to adore Him. This God would be just as needy as the lonely God, but with a need for respect rather than a need for love. His quest for glory might seem less desperate than the longing for love, but He would be equally dependent on creation to supply what He could not give to Himself.

Only our triune God can be entirely satisfied within Himself.

Our God is one, meaning He has no competitors. The Shema declares,

Our God is holy and high above us. He is on the back of beyond, and everything exists for His glory alone. Our God is equally three. If God were merely one, then we might think He was self-absorbed. It might even be a sin for Him not to be selfish, seeing how He is the most valuable being in the universe. But if God is eternally three, a community of self-giving lovers, then it isn’t possible for Him to be selfish. God has always loved the other within the Godhead. His very essence is love (1 John 4:8).

The closest we ever come in this life to imitating this divine interpenetration is in the act of sex. There is a reason, beyond the physical, why ecstatic participants say they “tasted the divine” or felt they “were knocking on heaven’s door.” When a man and a woman join bodies, they inevitably unite their souls, and their oneness is a reflection of the God who made them in His image. This sexual activity requires both partners to be unreservedly committed to each other. Any sex outside of the ironclad covenant of marriage is bound to hurt, for the wounded partners have ravaged what it means to be made in the image of God. They have treated the climax of their human identity as if it — and they — is nothing special. How can this not leave a mark?

The perichoretic unity of God is also why, after our basic needs for food and shelter are met, all other needs are essentially relational. The scoreboard of life may include success and stuff, but both of these depend heavily on our status. What others think about our success often determines how we evaluate what we accomplished. Have you ever completed a project and found few people cared? Maybe you put together a 4,000-piece jigsaw puzzle, wrote a book, or won the Most Eligible Bachelor Award at your local Comic-Con. You may have excitedly shared your success with family and friends, but if they merely shrugged, you gathered that what you did was not terribly important.

Relationships are also essential for enjoying our stuff. I once spent a lonely couple of days on Italy’s Amalfi Coast. Its hairpin turns and ancient villages clinging to the mountainside are achingly beautiful, but I didn’t enjoy them because I was missing my family and yearning to go home. A fine restaurant on an Italian beach isn’t much fun when you’re dining alone. A Hawaiian luau is even worse. I once made the mistake of going to one by myself, and I spent the entire night trying to disappear into clumps of people. I was in paradise, and I couldn’t enjoy it because I had no one to share it with.

The Grant Study attempted to define the good life by tracking the lives of nearly three hundred Harvard men. The study began in 1937, when the men were sophomores, and it followed them for more than seventy years through war, career, marriage, divorce, parenting, grand-parenting, retirement, and old age. George Valliant directed the study for four decades, and when asked, “What have you learned from the Grant Study men?” he replied, “That the only thing that really matters in life are your relationships to other people.”

A poor man surrounded by friends has wealth beyond measure, while a rich man with no one to call is pitifully poor. Why? Because God is triune, and He made us in His image as relational beings.

It’s so easy to slip into line with the world and keep score according to the world’s definitions of success! Usually, we introduce ourselves to new acquaintances with our name and our occupation. Often the conversation continues to where we live, where we went to school, and where our kids go to school. Michael Wittmer asked the question What if we’re kicking the ball at the wrong goal? Who are your key relationships? Who knows you and knows your story, the good and the bad? If you’re lonely and longing for relationships, may we encourage you to join a small group or Bible study and build relationships there. Loneliness doesn’t indicate anything bad or shameful within you. It’s a reflection of who God is and what you need in order to life a full, happy life! Join the conversation on our blog today. ~ Devotionals Daily