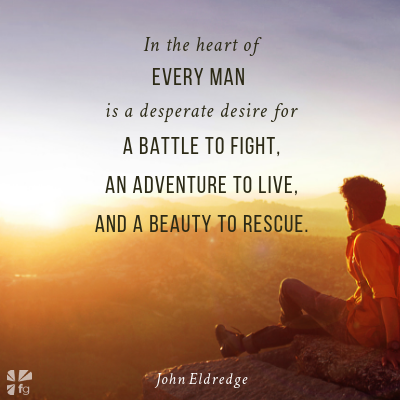 Adventure, with all its requisite danger and wildness, is a deeply spiritual longing written into the soul of man. The masculine heart needs a place where nothing is prefabricated, modular, nonfat, zip lock, franchised, on-line, microwavable. Where there are no deadlines, cell phones, or committee meetings. Where there is room for the soul. Where, finally, the geography around us corresponds to the geography of our heart.

Look at the heroes of the biblical text: Moses does not encounter the living God at the mall. He finds him (or is found by him) somewhere out in the deserts of Sinai, a long way from the comforts of Egypt. The same is true of Jacob, who has his wrestling match with God not on the living room sofa but in a wadi somewhere east of the Jabbok, in Mesopotamia. Where did the great prophet Elijah go to recover his strength? To the wild. As did John the Baptist, and his cousin, Jesus, who is led by the Spirit into the wilderness.

Whatever else those explorers were after, they were also searching for themselves. Deep in a man’s heart are some fundamental questions that simply cannot be answered at the kitchen table.

It is fear that keeps a man at home where things are neat and orderly and under his control. But the answers to his deepest questions are not to be found on television or in the refrigerator. Out there on the burning desert sands, lost in a trackless waste, Moses received his life’s mission and purpose. He is called out, called up into something much bigger than he ever imagined, much more serious than CEO or “prince of Egypt.” Under foreign stars, in the dead of night, Jacob received a new name, his real name. No longer is he a shrewd business negotiator, but now he is one who wrestles with God. The wilderness trial of Christ is, at its core, a test of His identity. “If you are who you think you are…” If a man is ever to find out who he is and what he’s here for, he has got to take that journey for himself.

He has got to get his heart back.

Westward Expansion Against the Soul

The way a man’s life unfolds nowadays tends to drive his heart into remote regions of the soul. Endless hours at a computer screen; selling shoes at the mall; meetings, memos, phone calls. The business world — where the majority of American men live and die — requires a man to be efficient and punctual. Corporate policies and procedures are designed with one aim: to harness a man to the plow and make him produce. But the soul refuses to be harnessed; it knows nothing of Day Timers and deadlines and P&L statements. The soul longs for passion, for freedom, for life.

As D. H. Lawrence said, “I am not a mechanism.” A man needs to feel the rhythms of the earth; he needs to have in hand something real — the tiller of a boat, a set of reins, the roughness of rope, or simply a shovel. Can a man live all his days to keep his fingernails clean and trim? Is that what a boy dreams of?

Society at large can’t make up its mind about men. Having spent the last thirty years redefining masculinity into something more sensitive, safe, manageable and, well, feminine, it now berates men for not being men. Boys will be boys, they sigh. As though if a man were to truly grow up he would forsake wilderness and wanderlust and settle down, be at home forever in Aunt Polly’s parlor. “Where are all the real men?” is regular fare for talk shows and new books. You asked them to be women, I want to say. The result is a gender confusion never experienced at such a wide level in the history of the world.

How can a man know he is one when his highest aim is minding his manners?

And then, alas, there is the church. Christianity, as it currently exists, has done damage to masculinity. When all is said and done, I think most men in the church believe that God put them on the earth to be a good boy. The problem with men, we are told, is that they don’t know how to keep their promises, be spiritual leaders, talk to their wives, or raise their children. But, if they will try real hard they can reach the lofty summit of becoming… a nice guy. That’s what we hold up as models of Christian maturity: Really Nice Guys. We don’t smoke, drink, or swear; that’s what makes us men.

Now let me ask my male readers: in all your boyhood dreams growing up, did you ever dream of becoming a Nice Guy? (Ladies, was the prince of your dreams dashing… or merely nice?)

Really now — do I overstate my case? Walk into most churches in America, have a look around, and ask yourself this question: What is a Christian man? Don’t listen to what is said, look at what you find there. There is no doubt about it. You’d have to admit a Christian man is… bored. At a recent church retreat I was talking with a guy in his fifties, listening really, about his own journey as a man. “I’ve pretty much tried for the last twenty years to be a good man as the church defines it.” Intrigued, I asked him to say what he thought that was. He paused for a long moment. “Dutiful,” he said. “And separated from his heart.” A perfect description, I thought. Sadly right on the mark.

As Robert Bly laments in Iron John, “Some women want a passive man if they want a man at all; the church wants a tamed man — they are called priests; the university wants a domesticated man—they are called tenure-track people; the corporation wants a… sanitized, hairless, shallow man.” It all comes together as a sort of westward expansion against the masculine soul. And thus the heart of a man is driven into the high country, into remote places, like a wounded animal looking for cover. Women know this, and lament that they have no access to their man’s heart. Men know it, too, but are often unable to explain why their heart is missing. They know their heart is on the run, but they often do not know where to pick up the trail. The church wags its head and wonders why it can’t get more men to sign up for its programs. The answer is simply this: we have not invited a man to know and live from his deep heart.

But God made the masculine heart, set it within every man, and thereby offers him an invitation:

Come, and live out what I meant you to be.

Permit me to bypass the entire nature vs. nurture “is gender really built-in?” debate with one simple observation: men and women are made in the image of God as men or as women.

So God created man in His own image, in the image of God He created Him; male and female He created them. — Genesis 1:27

Male and female. Now, we know God doesn’t have a body, so the uniqueness can’t be physical. Gender simply must be at the level of the soul, in the deep and everlasting places within us. God doesn’t make generic people; He makes something very distinct — a man or a woman. In other words, there is a masculine heart and a feminine heart, which in their own ways reflect or portray to the world God’s heart.

God meant something when He meant man, and if we are to ever find ourselves we must find that. What has He set in the masculine heart? Instead of asking what you think you ought to do to become a better man (or woman, for my female readers), I want to ask, What makes you come alive? What stirs your heart? The journey we face now is into a land foreign to most of us. We must head into country that has no clear trail. This charter for exploration takes us into our own hearts, into our deepest desires.

There are three desires I find written so deeply into my heart I know now I can no longer disregard them without losing my soul. They are core to who and what I am and yearn to be. I gaze into boyhood, I search the pages of Scripture, of literature, I listen carefully to many, many men, and I am convinced these desires are universal, a clue into masculinity itself. They may be misplaced, forgotten, or misdirected, but in the heart of every man is a desperate desire for a battle to fight, an adventure to live, and a beauty to rescue.

Excerpted with permission from Wild at Heart: Discovering the Secret of a Man’s Soul by John Eldredge, copyright Thomas Nelson.

Come share what makes you come alive on our blog! We want to hear from you. ~ Devotionals Daily