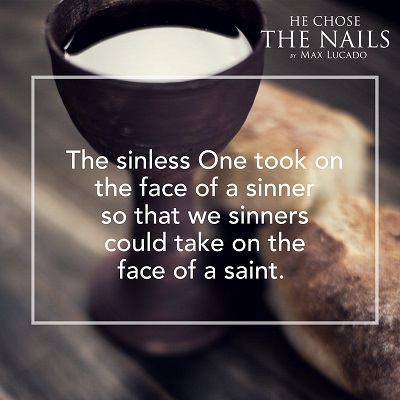 Editor’s Note: Wednesday, March 6th marked the beginning of Lent in the Christian Calendar. Lent is a period of forty days (not counting Sundays which are set aside as mini-Easters of rejoicing in the Resurrection) beginning on Ash Wednesday and ending on Holy Saturday, the day before Easter. It is a season of repentance, fasting, self-examination, and preparation for Easter that reflects back to Jesus’ temptation by Satan and tempering for His earthly ministry in the wilderness. During Lent Christians often practice fasting something and give their time, resources, and energy to others in remembrance of Jesus’ sacrifice for us.

But Christ without guilt… took upon Himself our punishment, in order that He might thus expiate our guilt, and do away with our punishment. — Augustine

For Christ died for sins once for all, the righteous for the unrighteous, to bring you to God. — 1 Peter 3:18 NIV

This is the mystery of the riches of divine grace for sinners; for by a wonderful exchange our sins are now not ours but Christ’s, and Christ’s righteousness is not Christ’s but ours. — Martin Luther

The maître d’ wouldn’t change his mind. He didn’t care that this was our honeymoon. It didn’t matter that the evening at the classy country club restaurant was a wedding gift. He couldn’t have cared less that Denalyn and I had gone without lunch to save room for dinner. All of this was immaterial in comparison to the looming problem.

I wasn’t wearing a jacket.

Didn’t know I needed one. I thought a sport shirt was sufficient. It was clean and tucked in. But Mr. Black-Tie with the French accent was unimpressed. He seated everyone else. Mr. and Mrs. Debonair were given a table. Mr. and Mrs. Classier-Than-You were seated. But Mr. and Mrs. Didn’t-Wear-a-Jacket?

If I’d had another option, I wouldn’t have begged. But I didn’t. The hour was late. Other restaurants were closed or booked, and we were hungry. “There’s got to be something you can do,” I pleaded. He looked and me, then at Denalyn, and let out a long sigh that puffed his cheeks.

He disappeared into the cloakroom and emerged with a jacket. “Put this on.” I did. The sleeves were too short. The shoulders were too tight. And the color was lime green. But I didn’t complain. I had a jacket, and we were taken to a table. (Don’t tell anyone, but I took it off when the food came.)

For all the inconvenience of the evening, we ended up with a great dinner and an even greater parable.

I needed a jacket, but all I had was a prayer. The fellow was too kind to turn me away but too loyal to lower the standard. So the very one who required a jacket gave me a jacket, and we were given a table.

Isn’t this what happened at the cross? Seats at God’s table are not available to the sloppy. But who among us is anything but? Unkempt morality. Untidy with truth. Careless with people. Our moral clothing is in disarray. Yes, the standard for sitting at God’s table is high, but the love of God for His children is higher. So He offers a gift.

Not a lime-colored jacket but a robe. A seamless robe. Not a garment pulled out of a cloakroom but a robe worn by His Son, Jesus.

One reference to Jesus’ garments is noteworthy.

They divided His clothes among the four of them. They also took His robe, but it was seamless, woven in one piece from the top. So they said, ‘Let’s not tear it but throw dice to see who gets it’. — John 19:23-24 NLT

It must have been Jesus’ finest possession. Jewish tradition called for a mother to make such a robe and present it to her son as a departure gift when he left home. Had Mary done this for Jesus? We don’t know. But we do know the tunic was without seam, woven from top to bottom. Why is this significant?

Scripture often describes our behavior as the clothes we wear. Peter urges us to be “clothed with humility” (1 Peter 5:5 NKJV). David speaks of evil people who clothe themselves “with cursing” (Psalm 109:18 NKJV). Garments can symbolize character, and like his garment, Jesus’ character was seamless. Coordinated. Unified. He was like His robe: uninterrupted perfection.

“Woven… from the top.” Jesus wasn’t led by His own mind; He was led by the mind of His Father. Listen to His words:

The Son can do nothing on His own, but only what He sees the Father doing; for whatever the Father does, the Son does likewise. — John 5:19 NRSV

But when Christ was nailed to the cross, He took off His robe of seamless perfection and assumed a different wardrobe, the wardrobe of indignity.

The indignity of failure. For a few pain-filled hours, the religious leaders were the victors, and Christ appeared the loser. Shamed before His accusers.

Worst of all, He wore the indignity of sin.

He Himself bore our sins in His body on the tree, so that we might die to sins and live for righteousness. — 1 Peter 2:24 NIV

The clothing of Christ on the cross? Sin — yours and mine. The sins of all humanity.

I can remember my father explaining to me the reason a group of men on the side of the road wore striped clothing. “They’re prisoners,” he said. “They have broken the law and are serving time.”

You want to know what stuck with me about these men? They never looked up. They never made eye contact. Were they ashamed? Probably so.

What they felt on the side of the road was what our Savior felt on the cross — disgrace. Every aspect of the crucifixion was intended not only to hurt the victim but to shame him. Death on a cross was usually reserved for the most vile offenders: slaves, murderers, assassins, and the like. The condemned person was marched through the city streets, shouldering his crossbar and wearing a placard about his neck that named his crime. At the execution site he was stripped and mocked.

Crucifixion was so abhorrent that Cicero wrote, “Let the very name of the cross be far away, not only from the body of a Roman citizen, but even from his thoughts, his eyes, his ears.”1

It’s no wonder that the Hebrew writer spoke of the “disgrace He bore” (Hebrews 13:13 NLT).

While on the cross, Jesus felt the indignity and disgrace of a criminal. No, He was not guilty. No, He had not committed a sin. And, no, He did not deserve to be sentenced. But you and I were, we had, and we did. We were left in the same position I was with the maître d’ — having nothing to offer but a prayer. Jesus, however, goes further than the maître d’. Can you imagine the restaurant host removing his tuxedo coat and offering it to me?

Jesus does. We’re not talking about an ill-fitting, leftover jacket. He offers a robe of seamless purity and dons my patchwork coat of pride, greed, and selfishness.

He wore our sin so we could wear His righteousness.

Indeed, we leave dressed in Christ Himself.

You have all put on Christ as a garment. — Galatians 3:27 NEB

Excerpted with permission from He Chose the Nails by Max Lucado, copyright Max Lucado.

Have you ever considered that you wear the clothes of the Lord? That He covers you with His own perfection? Come share your thoughts with us on our blog. We would love to hear from you! ~ Devotionals Daily